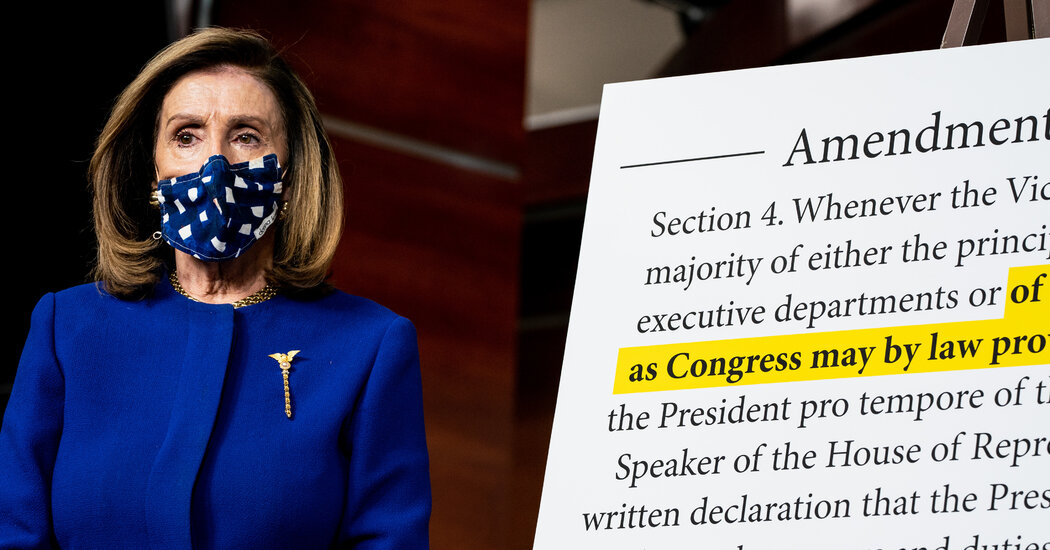 WASHINGTON — Speaker Nancy Pelosi, amplifying questions about President Trump’s fitness for office less than a month before the election, introduced legislation on Friday that would create a standing bipartisan group of outside experts tasked with evaluating the president’s mental and physical health and advising Congress on whether the commander in chief’s powers should be forcibly removed under the 25th Amendment.

The measure is certain to die at the end of the year, given that it would need a presidential signature to be enacted. But Democrats’ decision to promote it now — after the president’s coronavirus diagnosis and as Ms. Pelosi has suggested that his treatment might be affecting his judgment — was an unmistakable dig at the sitting president’s capacity to govern, just weeks before voters go to the polls.

“A president’s fitness for office must be determined by science and facts,” Ms. Pelosi said at a news conference on Capitol Hill, where she insisted that the bill, a version of which was introduced before Mr. Trump was hospitalized with the virus, had nothing to do with him. “This legislation applies to future presidents, but we are reminded of the necessity of action by the health of the current president.”

The measure, sponsored by Representative Jamie Raskin, Democrat of Maryland, would create a bipartisan commission of health experts, doctors and former senior executive branch officials, such as a former president, selected by top congressional leaders, to report to Congress on the president’s competence.

Mr. Trump has raged against the idea, calling Ms. Pelosi “Crazy Nancy” and accusing her of staging a coup, and on Friday suggested that Democrats had proposed the measure because they were concerned not about his competence, but about that of former Vice President Joseph R. Biden Jr., his Democratic rival.

“Crazy Nancy Pelosi is looking at the 25th Amendment in order to replace Joe Biden with Kamala Harris,” Mr. Trump said on Twitter. “The Dems want that to happen fast because Sleepy Joe is out of it!!!”

Republicans blasted the legislation as an attempt to overturn the results of the 2016 election.

“Right here in this last three weeks before the election, I think those kinds of wild comments should be largely discounted,” Senator Mitch McConnell, the majority leader, told reporters in his home state of Kentucky.

Congress has never invoked the 25th Amendment to assemble a group like the one being proposed. The amendment was ratified in 1967, in the wake of President John F. Kennedy’s assassination, to prepare the country for an immediate transfer of power because of an emergency or illness. It directs the vice president to work with a commission to determine whether the president is “unable to discharge the powers and duties of his office,” and could forcibly transfer those powers to the vice president until the president recovered.

Mr. Raskin argued on Friday that the saliency of convening such a commission had been underscored by the pandemic, and said that he wished Congress had set up the panel when the amendment was first ratified, adding, “there is never really a good time to do it because it’s always just seen in its local circumstance.”

“In the age of Covid-19, which has killed more than 210,000 Americans and now ravaged the White House staff, the wisdom of the 25th Amendment is clear,” Mr. Raskin said. “What happens if a president — any president — ends up in a coma, or on a ventilator, and has made no provisions for the temporary transfer of power?”

The renewed focus around the measure comes as Mr. Trump continues to refuse to answer basic questions about his illness, including when he last tested negative for the virus. Mr. Trump returned to the White House on Monday evening after being hospitalized at Walter Reed National Military Medical Center, where he received two experimental drug treatments and was briefly put on supplemental oxygen.

Ms. Pelosi wondered aloud on a private conference call with House Democrats this week whether the steroids Mr. Trump was taking had an impact on his thinking, according to people on the call who spoke on the condition of anonymity to describe it.

He was to receive a televised medical “evaluation” Friday evening on Tucker Carlson’s program on Fox News, conducted by a doctor who suggested in 2016, without evidence and without conducting a personal exam, that Hillary Clinton might be suffering from the lingering effects of a concussion that could compromise her fitness to serve.