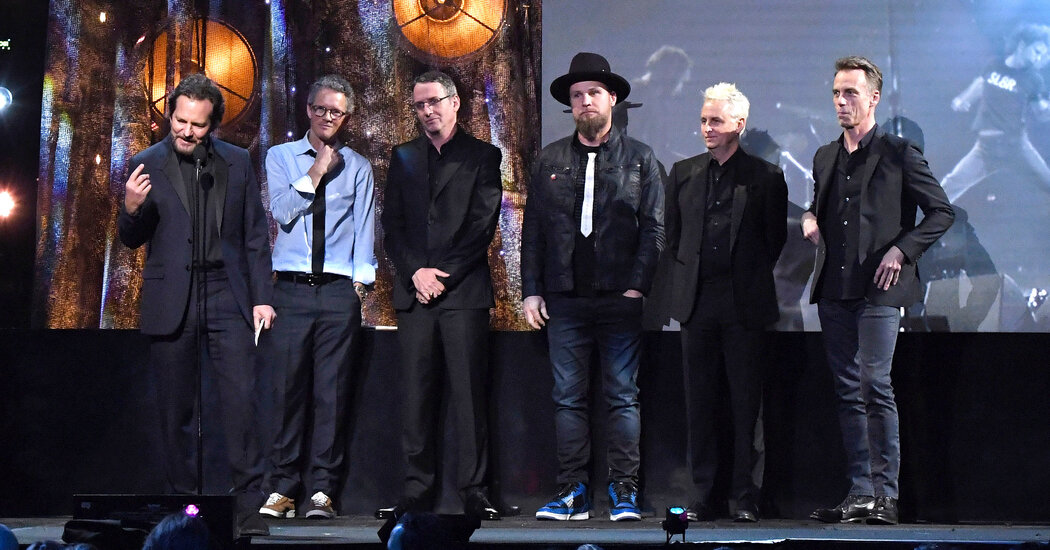 Back in March, as the coronavirus first gripped the country, Pearl Jam made the difficult decision to postpone all its concert dates for the foreseeable future. In doing so, the band was canceling not just a fall tour, but also a trip through presidential battleground states like Pennsylvania, Michigan and Wisconsin that would have doubled as a get-out-the-vote campaign.

While the tour may be canceled, the band’s political arm remains cranked on full blast.

“If we’re a band who does well in the swing states, then that also means that we’re not just playing to an audience of progressives — if they’re swinging, we’ve got a broad audience there,” said Eddie Vedder, Pearl Jam’s lead singer, describing the band’s ability to reach the kinds of voters who could decide the election.

The group is hoping to engage that fan base with its new political operation, PJ Votes. Having gotten to know its audiences over 30 years, the band knows that its fans are mostly in their 40s and that many are already likely to vote. So it is challenging each fan to reach out to three friends, not only getting them to register but also ensuring that they vote.

“What we’ve attempted to do is really just bring it back down to basics and encourage people to, again, think about what’s important to them,” Mr. Vedder said. “And be active and be patient and realize that this election is going to be different than any other.”

What sets Pearl Jam’s effort apart from many celebrity-driven initiatives is that it follows many of the best practices of modern political campaigns. People can sign up by texting a five-digit number, the same way they can for Joseph R. Biden Jr. or President Trump. The group is harnessing data gleaned from its social media following and rabid fan base, and has partnered with seasoned Democratic operatives like Whitney Williams, a former candidate for governor in Montana, and local civic groups such as Make the Road Pennsylvania.

Pearl Jam has even registered as a political advertiser on Facebook, spending more than $17,000 in the past week alone.

The band began its digital efforts at a 2018 concert in Missoula, Mont., supporting the re-election campaign of Senator Jon Tester, a Democrat, with a similar texting operation to register 4,000 new voters at the show. Ninety percent of them voted in the election, according to the band.

“That prepared us for a lot of what we’re doing right now,” said Jeff Ament, the bassist. “We sort of took that model and just blew it up a little bit.”

In every election cycle, artists and athletes use their platform to encourage fans to vote. But 2020 has seen celebrities embrace more sophisticated, holistic approaches. LeBron James, for example, launched More Than a Vote, a group focused on protecting African-Americans’ voting rights. PJ Votes is also trying to go beyond the basics.

“It’s a sophisticated operation, it’s informed by the best techniques in our business,” said Howard Wolfson, a Democratic strategist. “If you’re an artist with millions of followers on Instagram and you say I should vote for Joe Biden, that will have an impact, and that’s great. But that’s not a campaign. That’s a moment. And I think what they have done is really put together a campaign that is potentially very powerful, given the depth and breadth of their audience.”

Like many bands with its longevity, Pearl Jam has a fan base that is both wide and loyal. And it counts some unexpected supporters, which was attractive to Ben Jealous, president of People for the American Way, a liberal advocacy group that partnered with PJ Votes.

“I mentioned Pearl Jam to Dolores Huerta and her eyes lit up,” Mr. Jealous said, referring to the 90-year-old labor activist. “And that’s one of the reasons why they were attractive to us when they reached out. When they speak, their people listen.”

Pearl Jam’s political activism dates back to its earliest years, when the band hosted a free concert in 1992 called Drop in the Park to register voters in Seattle. But it is also rooted in its music, and the rebellious soul that has animated so much of rock and punk music.

“When I was young, even the greatest historian of our time, Howard Zinn, he couldn’t get me as jacked up on politics as Joe Strummer,” Mr. Vedder said, referring to the British musician.

“We were inspired by Neil Young singing ‘Ohio,’ hearing ‘Gimme Some Truth’ and the Clash and the Sex Pistols talking about the Tory system in England and more talking about a whole host of world history that didn’t get taught to me in high school,” Mr. Ament added. “There’s something extra powerful about being in the presence of music that has that extra bit of gravity.”

Pearl Jam released a new song last week, “Get It Back,” part of a second compilation volume titled “Good Music to Avert the Collapse of American Democracy.” And on Oct. 22, the 30th anniversary of its first live performance, the band will stream online its famed April 29, 2016, Philadelphia concert, which kicked off with its debut album, “Ten,” performed from beginning to end.

The Philadelphia connection is intentional. Though the group has aimed its message at several swing states, Pennsylvania is at the top of the list. And Pearl Jam hopes its fans in that state and elsewhere will use their voices to drown out the swell of disinformation in this election.

“We will sound the alarm, with their well-being in mind, to put it out there that there’s some bad information being spread out there,” Mr. Vedder said. “And it’s turning into chaos and deadly violence and dividing us.”

Asked how their feelings about this moment could be best summed up in a Pearl Jam song, Mr. Vedder immediately offered the opening lyrics to “Porch” from the album “Ten,” an anthem that cannot be quoted here.

Mr. Vedder and Mr. Ament then agreed on the cleaner, but no less powerful, lyrics from a cover: John Lennon’s “Gimme Some Truth.”