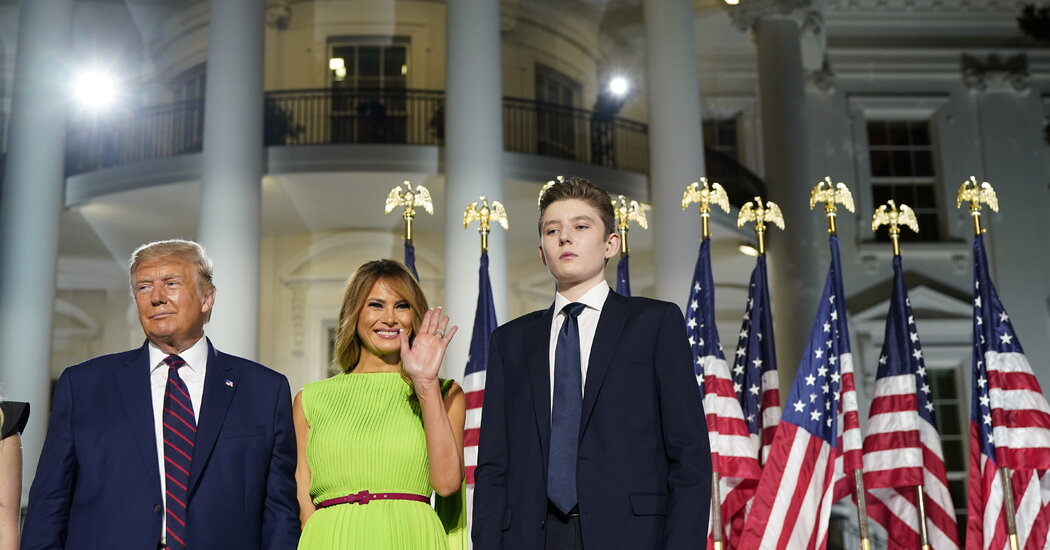 WASHINGTON — Barron Trump, the president’s youngest son, tested positive for the coronavirus after his parents did earlier this month, Melania Trump, the first lady, revealed on Wednesday, adding that he has since tested negative.

President Trump announced early on Oct. 2 that he and his wife had tested positive, and the White House had said Barron, 14, had tested negative. But Mrs. Trump said in a statement Wednesday that “my fear came true when he was tested again and it came up positive.”

“Luckily, he is a strong teenager and exhibited no symptoms,” she said. Mr. Trump, speaking briefly to reporters as he left the White House for a rally in Des Moines, said Barron was doing “fine.”

Mrs. Trump did not say when Barron tested positive, and White House officials did not say why they did not reveal it at the time. But the president and first lady have generally tried to shield Barron from news media coverage.

A White House official said Barron had not been in contact with anyone outside his family and the residence staff since his positive test. St. Andrew’s Episcopal, the school in Maryland he attends, has been all virtual.

Public health experts have criticized the example the White House has set in taking few precautions against the spread of the coronavirus and the number of staff members who have tested positive as a result.

Mr. Trump has frequently refused to wear a mask and mocked his Democratic opponent, Joseph R. Biden Jr., when he did, and many staff members, including Mark Meadows, the chief of staff, have followed his example.

Returning last week from four days and three nights at Walter Reed National Military Medical Center, where he received treatment for the virus, the president made a show of removing his mask before entering the White House.

Mr. Trump also hosted a large gathering in the Rose Garden for his Supreme Court nominee, Judge Amy Coney Barrett, where at least eight people, including the president, may have become infected. The White House has chosen not to trace the contacts of guests and staff members from that event.

Mrs. Trump has generally taken a more cautious approach than her husband to the virus and has not minimized its effects the way her husband has.

Mr. Trump has downplayed his symptoms, including a shortness of breath, and focused only on trying to demonstrate that he has recovered. Mrs. Trump, on the other hand, described the “roller coaster” symptoms she experienced in a statement on Wednesday titled “My Personal Experience With Covid-19,” her first extensive update on her health since the announcement that she had tested positive.

“I experienced body aches, a cough and headaches, and felt extremely tired most of the time,” she said.

Mrs. Trump, who had not been seen or heard from since the positive test announcement, said that she had spent her recovery “reflecting on my family,” and that she hoped “to resume my duties as soon as I can.”

She added, “I also thought about the hundreds of thousands of people across our country who have been impacted by this illness that infects people with no discrimination.”

Just as she did during her speech at the Republican National Convention, Mrs. Trump acknowledged the effects of the virus on Americans across the country. Mr. Trump, in contrast, emerged from his own hospitalization for the coronavirus with a less empathetic message: “Don’t let it dominate your life.”

And unlike Mr. Trump, who has been promoting an experimental drug as a “cure” for Covid-19, she said she “chose to go a more natural route in terms of medicine, opting more for vitamins and healthy food.”

There are no fully effective, federally approved treatments for Covid-19. Some have promoted vitamins and supplements as immunity-bolstering additions to the diet, but there is not yet evidence that this can specifically benefit coronavirus patients.

Mrs. Trump encouraged Americans to try to stay healthy, noting that “a balanced diet, fresh air, and vitamins really are vital to keep our bodies healthy.”

A new study confirms what many of...
Read more
Previous articleCNN drops bombshell on investigation into Egypt backing Trump in 2016
Next articleTwitter hackers posed as IT workers to trick employees, NY probe finds