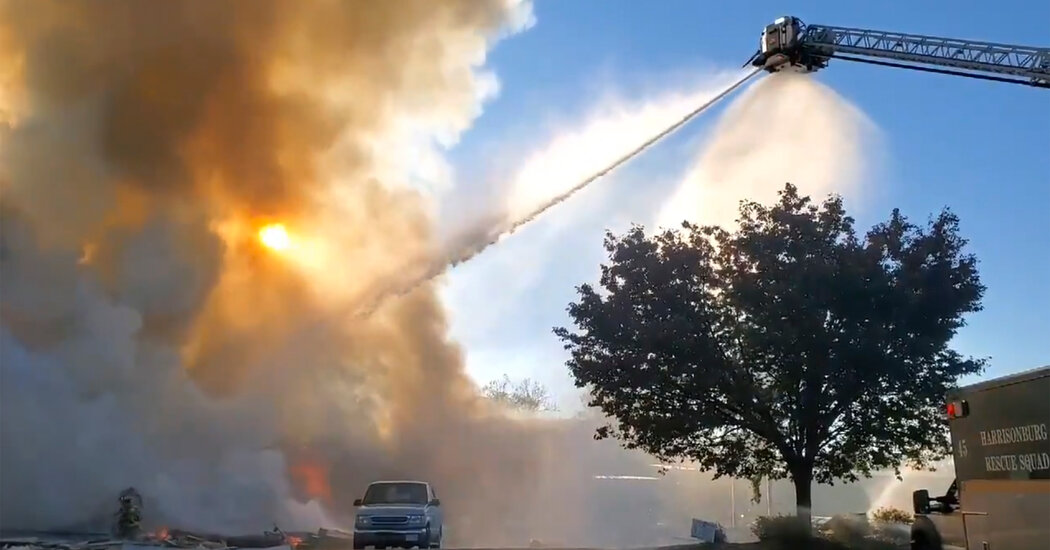 At least three people were taken to hospitals, two of them with serious injuries, after an explosion and fire on Saturday morning at a strip mall in Harrisonburg, Va., the authorities said.

The cause of the explosion was unknown but was under investigation, Michael Parks, a spokesman for the city, which is about 130 miles northwest of Richmond, said at a news conference. He said the two-story strip mall was a “complete loss.”

There was no information as of Saturday afternoon that pointed to foul play or anything other than an accident, Mr. Parks said. Investigators have not yet ruled out a gas leak.

Steve Blando, a spokesman for the federal Bureau of Alcohol, Tobacco, Firearms and Explosives, said investigators from the agency’s Washington division would work with Harrisonburg fire officials to investigate the “origin and cause of the explosion and subsequent fire.” He said no further information was available.

A statement from Columbia Gas of Virginia said that crews had shut off natural gas service where the explosion happened.

“At this point, we have identified no issues with our facilities,” the statement said. “No odor of gas leaks were reported to Columbia, and we have found no recent reports of natural gas leaks in the area.”

The city said that firefighters had accounted for those at the shopping center in their primary search of the mall, which consisted of about four businesses, including a music store and a recording studio. Mr. Parks said firefighters would make one final search just in case.

A spokeswoman for Sentara Healthcare said two people had been airlifted to UVA Medical Center; the City of Harrisonburg said on Twitter that two people were in stable condition at the medical center. One person had minor injuries and was being treated at Sentara RMH Medical Center.

Those injured were outside the strip mall when emergency responders arrived, Chief Matthew Tobia of the Harrisonburg Fire Department said at a news conference on Saturday morning.

Officials at James Madison University said on Facebook that the injured included a university student, who was transported to a hospital with minor injuries and was expected to be released soon.

The university added that two other students had been treated at the scene and released.

The students were part of a group of about 30 people from the university’s R.O.T.C. program who were participating in a U.S. Army race. A building exploded about 30 yards from the start and finish lines, the university said.

Some nearby buildings were damaged but not seriously in the explosion, which was reported around 8:30 a.m. and was heard and felt by people who lived nearby.

Joe Lockinger, who lives about a quarter of a mile from where the explosion happened, was finishing his morning coffee when he and his wife heard the blast.

“We were sitting there talking about what we were going to do during the day, and all of a sudden, this big bang, and the whole house shook,” he said. “We thought it was a bomb, because it was such force.”

Mr. Lockinger and his neighbors rushed outside, and he saw what he described as a “mushroom cloud.”

Later, he went to see the explosion site and said it looked like a “war zone.” He saw a sheet of aluminum siding that had flown about 60 feet up into the air into a tree because of the explosion.

Noah Yoder, who lives about half a mile north of where the strip mall was leveled, said he had been asleep when he heard a “loud boom” that woke him up, and he immediately felt a shock wave hit him.

Some businesses in the mall confirmed that their employees were safe.

“We have received information from our landlord that the store has been destroyed by an explosion,” a representative for one of the stores, Hometown Music, wrote on Facebook. “We were not open and the employees are OK. Thanks for you concern and prayers. … That’s all I know for now.”

Another store, Blue Sprocket Sound, wrote on Facebook: “We don’t have all the details yet about what happened at our building. But at this time our crew is safe, and that’s the most important thing. Our hearts go out to the other businesses in the area, and want to thank all the first responders who are working hard on the scene.”