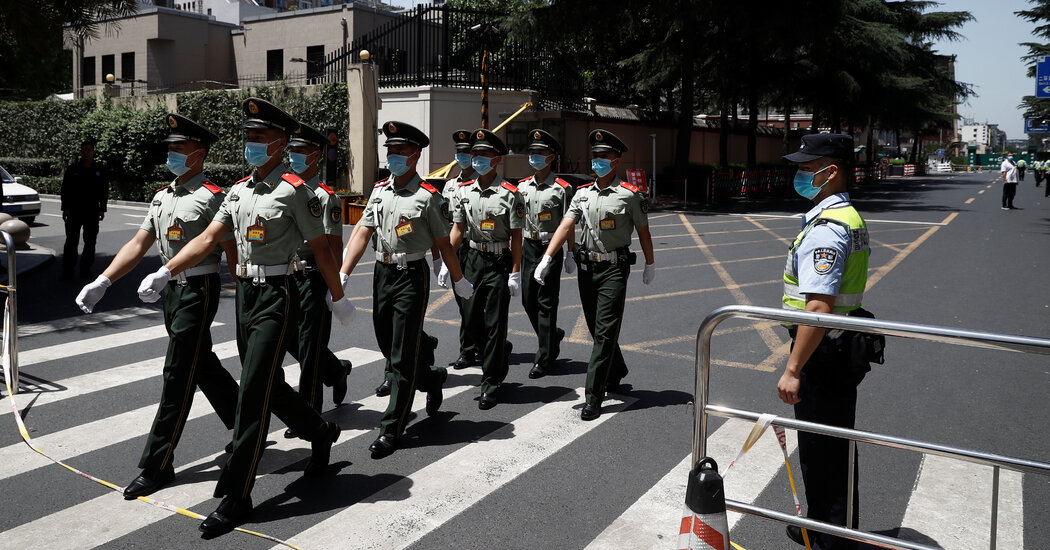 WASHINGTON — Chinese officials have told the Trump administration that security officers in China might detain American citizens if the Justice Department proceeds with prosecutions of arrested scholars who are members of the Chinese military, American officials said.

The Chinese officials conveyed the messages starting this summer, when the Justice Department intensified efforts to arrest and charge the scholars, mainly with providing false information on their visa applications, the American officials said. U.S. law enforcement officials say at least five Chinese scholars who have been arrested in recent months did not disclose their military affiliations on visa applications and might have been trying to conduct industrial espionage in research centers.

American officials said they thought the Chinese officials were serious about the threats. The State Department has reiterated travel warnings as a result, they said. Western officials and human rights advocates have said for years that the Chinese police and other security agencies engage in arbitrary detentions.

The threats are another striking escalation in tensions between the United States and China, which have been rising for years and have surged sharply since the coronavirus pandemic began in central China last winter.

But some analysts in Washington and Beijing say the Chinese government is trying to avoid any serious provocations against the United States before the elections in November. And some Chinese officials are aiming to cool the temperature of U.S.-China relations, whether President Trump wins another term or Joseph R. Biden Jr., the Democratic challenger and former vice president, takes over in the White House.

A Justice Department spokesman declined to comment on whether Chinese officials had delivered warnings about plans to detain American citizens to retaliate for prosecutions of Chinese scholars. The threats were reported earlier by The Wall Street Journal.

“We are aware that the Chinese government has, in other instances, detained American, Canadian and other individuals without legal basis to retaliate against lawful prosecutions and to exert pressure on their governments, with a callous disregard of the individuals involved,” John C. Demers, the head of the Justice Department’s national security division, said in a statement. “If China wants to be seen as one of the world’s leading nations, it should respect the rule of law and stop taking hostages.”

On Sunday, Hu Xijin, the chief editor of Global Times, a nationalistic newspaper linked to the Chinese Communist Party, wrote on Twitter that the detentions in the United States of Chinese scholars on spying charges were “not good” for the “safety of some US nationals in China.”

“Does Washington need to be warned?” he wrote. “It’s common sense. In my view, hegemony has turned some US elites stupid, or they’re pretending to be stupid.”

In recent years, the Justice Department has scrutinized the work of Chinese researchers at American universities and other scientific institutions. U.S. officials have also criticized programs run by the Chinese government to recruit scientific and technical experts. Mr. Demers and other U.S. officials have long said that Beijing uses a wide range of tools to gather intelligence at American research centers.

The Trump administration announced in late May that it was barring Chinese students at the graduate level or higher who had ties to some military institutions from entering the United States.

In late July, the State Department ordered China to close its consulate in Houston, saying it was a center of research theft in the United States. Justice Department officials said that Chinese officials in other missions also took part in industrial and scientific espionage, and that the closure was meant to deter Beijing from continuing the actions. At that time, the U.S. authorities were also seeking to arrest a Chinese student or researcher, Tang Juan, who had gone into hiding in the San Francisco consulate after being questioned by the F.B.I.

The F.B.I. arrested Ms. Tang on July 23 and accused her of hiding her military affiliation. She has pleaded not guilty to charges of visa fraud and making false statements.

The Chinese government has denied accusations that members of its military are in the United States for scientific and industrial espionage.

State Department representatives declined to discuss any recent threats of detentions of Americans made by Chinese officials. But for months, department officials have been stressing harsh actions taken by Chinese security agencies against Americans. On Sept. 14, the department updated travel advisories for mainland China and Hong Kong, saying that Americans should “reconsider travel” because of Covid-19 and risk arising from “arbitrary enforcement of local laws.”

In June, Chinese officials charged two Canadians — Michael Kovrig, a former diplomat, and Michael Spavor, a businessman — with espionage. Security officers had detained the two men 18 months earlier. Canadian and American officials widely believe the men are being held because of a Justice Department case against Meng Wanzhou, a top executive of the Chinese technology company Huawei, who was arrested in Canada in December 2018 and might be extradited to the United States.

Last year, Chinese security officers prevented a Koch Industries executive from leaving China for some days. And in a hotel lobby in Beijing, officers tried to take a former U.S. diplomat away for questioning. He was in China to attend a forum on artificial intelligence that he had helped organize. The American Embassy in Beijing intervened, and the Chinese officers backed off.

The State Department has also denounced the practice by Chinese officials of “exit bans,” or refusing to allow foreign citizens to leave the country, often as a means of coercion in legal or business disputes.