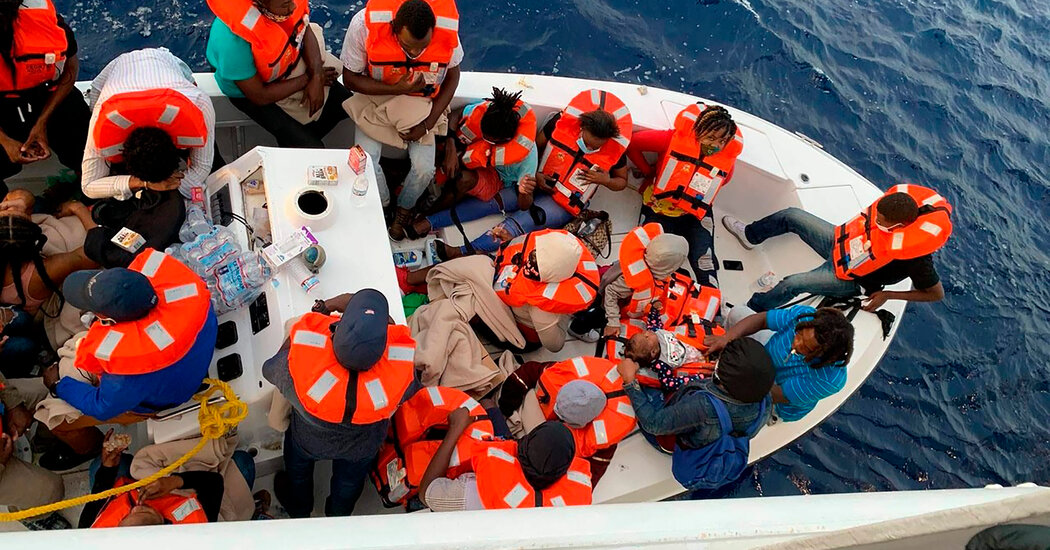 The Carnival Sensation was sailing in international waters off the Florida coast on Saturday when crew members spotted a crowded 36-foot boat that appeared to be in distress.

The ship maneuvered alongside the boat and crew members handed over blankets, life jackets, food and water to the 24 people onboard the smaller vessel, including two children, according to the Carnival Cruise Line.

As it floated 37 miles off the coast of Palm Beach, the boat began to take on water. The passengers were quickly ushered aboard the cruise ship through a side hatch that is typically used in port to load supplies via a gangway. The boat sank after the rescue, a Coast Guard spokeswoman said.

The rescued boat was coming from Freeport, Bahamas, said Nicole J. Groll, the Coast Guard spokeswoman. It was not clear where the boat was headed, she said, nor was it clear what had happened to the boat that caused it to sink.

“The disabled vessel sank and actions are currently being taken to coordinate the transfer of the individuals ashore,” Ms. Groll said in a statement Monday.

The $45 billion global cruise industry serves 20 million passengers in a typical year. But since the beginning of the coronavirus pandemic, ships have been roaming the seas for months without guests, staffed by skeleton crews. Operations have been suspended until Oct. 31, and some lines have canceled cruises into next year.

Carnival operates 23 ships. While they are idle, they maintain a “minimum nonoperational manning status,” according to a spokesman. That means they are staffed by 75 to 100 crew members, including marine engineers, technicians and officers, as well as housekeeping, culinary and other staff members.

Occasionally, they perform rescues, the spokesman said. In July, the Carnival Legend responded to a call for help from a boat that had run out of fuel off the coast of the Bahamas. The Legend gave the boaters 25 gallons of gas to help them make their way back to Jacksonville, Fla.

Ships are obligated under maritime law to respond to vessels in distress, said Jim Walker, a Miami-based maritime lawyer.

The duty to rescue a derelict vessel falls to a ship’s captain, who “has both a moral and a legal obligation to help,” he said.

There are typically three or four such rescues every year, some of which involve migrants, Mr. Walker said.

“Often there is no true ‘rescue’ of foreign immigrants at sea because the cruise ship will call the U.S.C.G. who will pick them up and then return them to their home countries,” Mr. Walker said in an email, referring to the Coast Guard. “It is not so much a ‘rescue’ but an ‘interception’ at sea.”

In some cases, he said, a ship’s captain or the captain’s employer could face criminal charges for ignoring a cry for help.

In 2012, Princess Cruises was sued after one of its cruise ships, the Star Princess, failed to help a disabled fishing boat that had been adrift for days when it was spotted by crew members and passengers. Two of the people on the fishing boat died.

The cruise industry has come under fire during the coronavirus pandemic, particularly early in the outbreak as passengers and crew members were trapped aboard ships where the virus spread rapidly.

In February, more than 700 passengers were infected on the Diamond Princess as the ship idled off the coast of Japan. Nine of the infected passengers died.

In August, the cruise industry voluntarily suspended operations until Oct. 31, following the extension of a no-sail order for cruise ships through Sept. 30 issued by the Centers for Disease Control and Prevention. The agency noted that from March to July there had been nearly 3,000 suspected and confirmed coronavirus cases and 34 deaths on cruise ships in U.S. waters.

The Carnival Corporation, which operates Carnival, Princess and other brands and serves roughly 50 percent of the global cruise market, has dealt with outbreaks on several of its ships, including Holland America’s Zaandam, which tried to unload sick passengers in Florida in April. Last week, Carnival Cruise Line canceled several cruises that were scheduled for November and January.