Disneyland and Other California Theme Parks Get Rules for Reopening 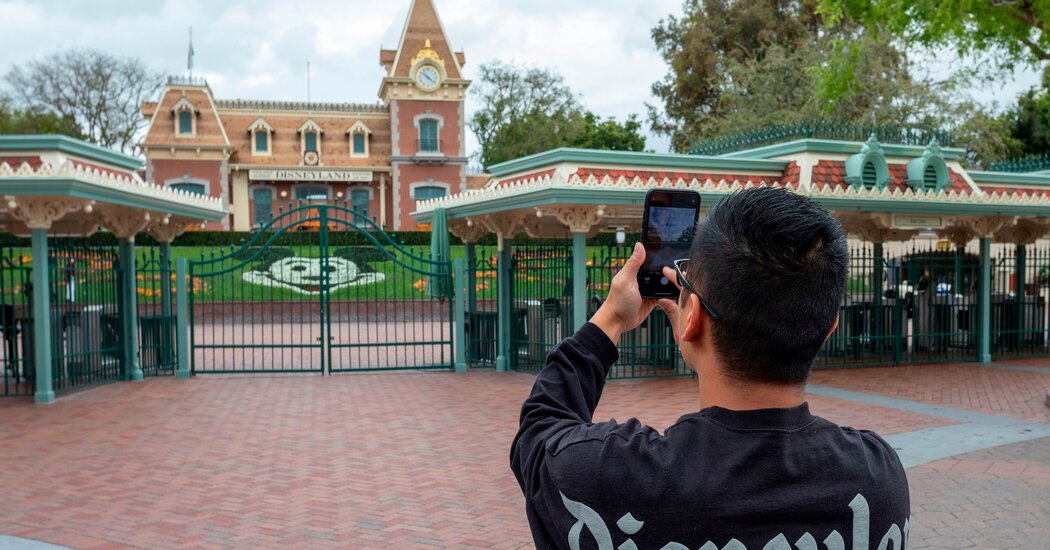 California health officials issued long-awaited guidance for reopening theme parks in the state on Tuesday, setting targets for when attractions like Disneyland Resort, in Anaheim, and Universal Studios Hollywood, in Los Angeles, can open their doors. For the big parks, it could be a long road: their counties must reach the least-restrictive “yellow” tier of the state’s four-tier Covid-19 economic-reopening plan.

In terms of coronavirus cases, Orange County, home to Disneyland, is currently in the “red,” or second, tier and Los Angeles County, Universal Studios’ location, is currently in the most restrictive “purple” tier. It could be months before either county meets the guidelines for the “yellow” tier, which requires there be fewer than one case a day per 100,000 residents and a testing positivity rate of less than 2 percent. The parks have been closed since March.

The secretary of California’s Health and Human Services Agency, Dr. Mark Ghaly, issued the guidelines in a video conference on Tuesday and said that he believes that the tier guidelines can be reached. He said that San Francisco County had already met them.

“There’s lots of work we can do together — both state, local, business leaders, community leaders, individuals — to do what we can to make sure that we reduce transmission throughout our county and there is a path forward there,” Dr. Ghaly said. “We do not know when, but we do know how, and I think we’ll continue to put in the hard work to get us there one county at a time.”

However, Disneyland Resort’s president, Ken Potrock, said in a statement that the guidelines are “arbitrary” and “unworkable.”

“We have proven that we can responsibly reopen, with science-based health and safety protocols strictly enforced at our theme park properties around the world,” Mr. Potrock said. “Nevertheless, the State of California continues to ignore this fact, instead mandating arbitrary guidelines that it knows are unworkable and that hold us to a standard vastly different from other reopened businesses and state-operated facilities.”

When parks do reopen, they will have to implement a reservation system allowing guests to book visits ahead of time. They will also have to screen guests for symptoms and mandate masks everywhere inside the park, except when people are eating and drinking. Larger parks, like Disneyland and Universal Studios Hollywood, will have to limit capacity to 25 percent.

Smaller parks in California can reopen when they reach the third or “orange” tier. They will be allowed to have up to 25 percent capacity or 500 guests, depending on which number is less, and only people from the park’s home county will be allowed to visit.

Disney World, the company’s Orlando, Fla., park, reopened in July with strict social distancing and capacity requirements and there have been no major outbreaks of the coronavirus associated with the park. But low attendance has led the company to start layoffs there. The pandemic has cut off many of Disney’s lines of business, including films, theater productions and cruises. Disneyland generated an estimated $3.8 billion in revenue last year, according to Michael Nathanson, a media analyst.

On Monday, a coalition of unions representing thousands of workers at Disneyland told California Gov. Gavin Newsom that it is generally satisfied with the health measures laid out by the company for operating safely.

A new study confirms what many of...
Read more
Previous article‘A source of inspiration’ for egalitarians everywhere: Progressive International celebrates triumph of democracy in Bolivia
Next articleRural U.S. Hospitals Are on Life Support as a Third Wave of COVID-19 Strikes