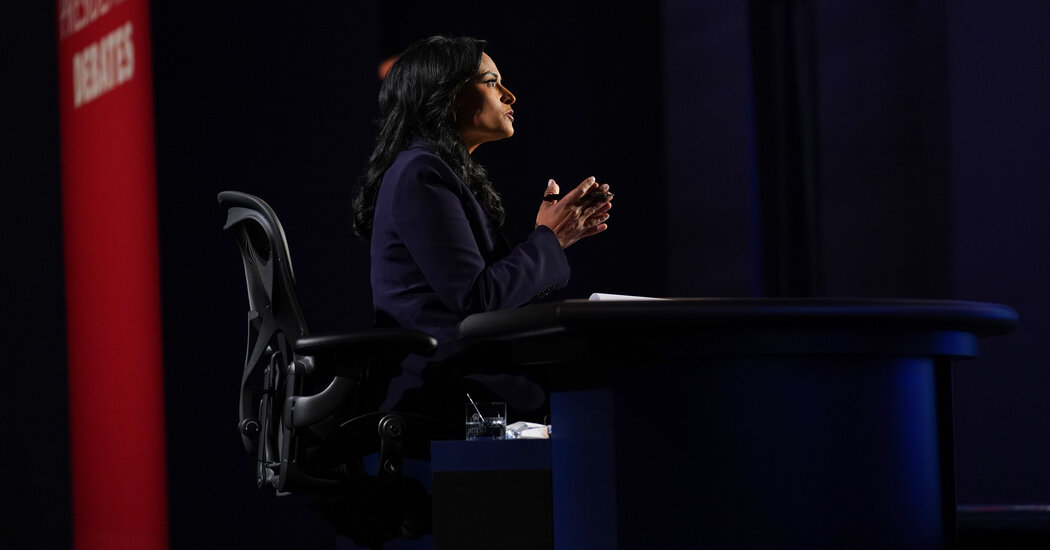 She began with a plea for civility. “Please,” Kristen Welker instructed the men standing before her, “speak one at a time.”

For the most part on Thursday night, Ms. Welker got what she wanted.

In a high-stakes debut overseeing a presidential debate — taking charge of a candidate matchup that proved a bucking bronco for the previous moderator, Chris Wallace of Fox News — Ms. Welker, an NBC anchor and correspondent, managed to restore order to a quadrennial institution that some believed could not be tamed.

No doubt, she benefited from Trump 2.0: A calmer president arrived onstage Thursday, a contrast with the candidate who derailed the proceedings in Cleveland last month. And she had a technological assist in the form of muted microphones, a novelty installed to keep the exchanges between Mr. Trump and his Democratic opponent, Joseph R. Biden Jr., from going from civics to chaos.

But in a poised and crisp performance, Ms. Welker, 44, succeeded where Mr. Wallace was walloped. Battle tested by years of covering the Trump White House, she parried with the president and cut him off as needed; Mr. Trump, eager to shed voters’ memories of his unruly performance last month, mostly acquiesced.

Ms. Welker, the first Black woman to moderate a general-election presidential debate since Carole Simpson of ABC in 1992, entered the evening facing an onslaught of attacks from Mr. Trump, who this week called her “terrible.”

His aides dredged up her parents’ political donations in an effort to accuse her of bias; a photograph of her with Barack Obama at a White House holiday party emerged on right-wing websites. (Her attendance at Mr. Trump’s equivalent party in 2017 went unmentioned.)

Little of the pressure showed onscreen. Ms. Welker was polite but firm in guiding the discussion, offering chances for brief rebuttals but also taking control when the candidates threatened to go on a harangue, repeatedly urging, “We need to move on.”

When Mr. Trump descended into unverified accusations about the business dealings of Mr. Biden’s family — a key but unsubstantiated element of his closing campaign argument — Ms. Welker let the discussion play out, to a point. When the president compared Mr. Biden’s siblings to “a vacuum cleaner, sucking money,” Ms. Welker firmly cut him off: “OK, President Trump, thank you. We do need to move on.”

Mr. Trump granted Ms. Welker, or “Kristen” as he called her, a rarity in his dealings with journalists: some praise. “By the way, so far, I respect very much the way you’re handling this, I have to say,” he told Ms. Welker at one point — only a few hours after he disparaged her to his millions of Twitter followers.

Whether the president is as friendly to Ms. Welker in the days ahead is a very open question. But her achievement on Thursday night may be that viewers came away focused on the candidates and what they had to say (muted microphones and all) rather than on the moderator’s performance.

“First of all, I’m jealous,” Mr. Wallace said when asked for his thoughts on Fox News immediately after the debate ended. “I would have liked to be able to moderate that debate.”