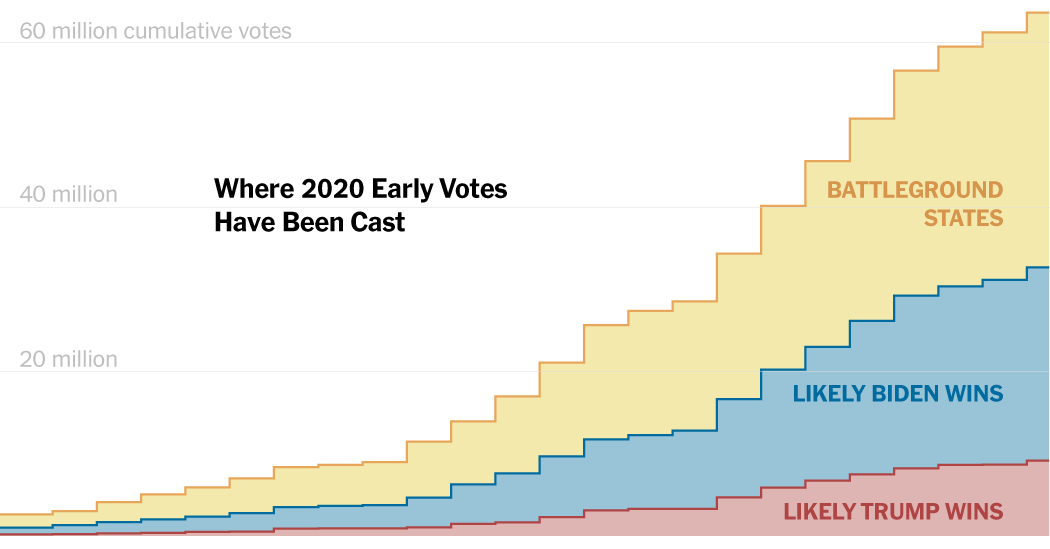 A week before Election Day, more than 64 million Americans have already voted — and about half of them are in the dozen or so competitive states that will ultimately decide who wins the Electoral College.

Possibly even more significant, early votes in these battlegrounds account for more than half of those states’ total votes in 2016. Nationally, voters have already cast about 46 percent of the total vote counted in 2016, according to the United States Elections Project.


How votes cast so far compare with total 2016 turnout


Because of the coronavirus pandemic, many states have changed voting rules, allowing millions to vote by mail for the first time, and many others have voted in person early to avoid an anticipated crush of voters on Election Day. Voter enthusiasm for and against President Trump has also fueled record-level early turnout across the country.

In Pennsylvania — a state Mr. Trump narrowly won in 2016 — more than three times as many Democrats have voted than Republicans. The party breakdown is more even in Florida and North Carolina.

Early votes in populous Texas, which leans Republican but is considered competitive this year because of its growing populations of people of color, have already surpassed 80 percent of the state’s 2016 total turnout. And votes in Arizona, Florida, Georgia, Nevada and North Carolina account for more than 60 percent of the total ballots that were cast in those states four years ago.

Voters are also turning out in large numbers in states that are more likely to favor Joseph R. Biden Jr. These states together account for more than a third of the votes cast so far and 43 percent of the total 2016 votes in these states. With early voting just getting started in some states, like New York, these numbers are likely to climb.

Early voting has been less extensive in states that are more likely to favor Mr. Trump. These states tend to be less populous than many of the Democratic-leaning and battleground states, so it’s not surprising that they make up a smaller share of total early votes. But their early votes are also smaller as a percentage of the number of people who voted four years ago.

Mr. Trump, who has railed against mail voting, is counting on a “red wave” of in-person voting on Nov. 3 to overcome what appears to be an early voting advantage for Democrats.