Katelyn Evans, 16, has never met Randy Kerr—and there’s no reason she should have. It was 66 years ago that Kerr, then 6, became briefly famous, receiving the first injection of Jonas Salk’s experimental polio vaccine during the massive field trial of hundreds of thousands of children in the spring of 1954. History notes that the vaccine worked, and the children who stepped forward to receive either the actual shot or a placebo were heroically dubbed the Polio Pioneers.

Evans is a pioneer of the modern age, one of an eventual group of 600 children in the 16-to-17 year-old age group (along with 2,000 more between 12 and 15) to volunteer to be part of a Phase 3 trial to test an experimental COVID-19 vaccine made by the multinational pharmaceutical giant Pfizer. The company had already enrolled 42,113 adult volunteers in its Phase 2 and 3 trials, but only recently did the U.S. Food and Drug Administration (FDA) give approval to include children. And Evans, a high school junior in Cincinnati, was among the earliest, receiving her first of two injections on Oct. 14, at Cincinnati Children’s Hospital.

“She was the youngest one to receive the vaccine at that point in time,” says her mother, Laurie Evans, an elementary school teacher. In the spring, the family saw a news report that Pfizer was looking for volunteers and Evans and both of her children signed up. “Katelyn was the only one who got the call,” Laurie says. “I know from the response we’ve gotten that there are some people out there who don’t think this is the smartest thing for us to have done. But I’m more afraid of COVID than the vaccine.”

With good reason. The 8.8 million Americans who have contracted the disease include about 800,000 children, with the American Academy of Pediatrics (AAP) reporting a 13% increase in total pediatric cases in just the first two weeks of October. Children with COVID-19 may typically fare better than adults who catch the virus, but they can still become severely ill: some 3.6% of total U.S. COVID-19 patients who have had to be hospitalized have been children, according to the AAP. That reality makes volunteering for the Pfizer field trial more than an act of public-service heroism; it is also a potential act of preventive medicine.

Certainly, that’s the way Sharat Chandra saw things. Sharat was already part of the Pfizer adult trial and when word first went around that children would soon be included too, he and his wife discussed the possibility of enrolling their 12-year-old son Abhinav, and then posed the question to him.

“I raised it to my son and we felt that it might be a good thing for him because if he got the vaccine, it could protect him from getting the virus himself,” Sharat says. “Because he was attending school in person, we felt that it would be good to minimize his risk for infection, if we can.” 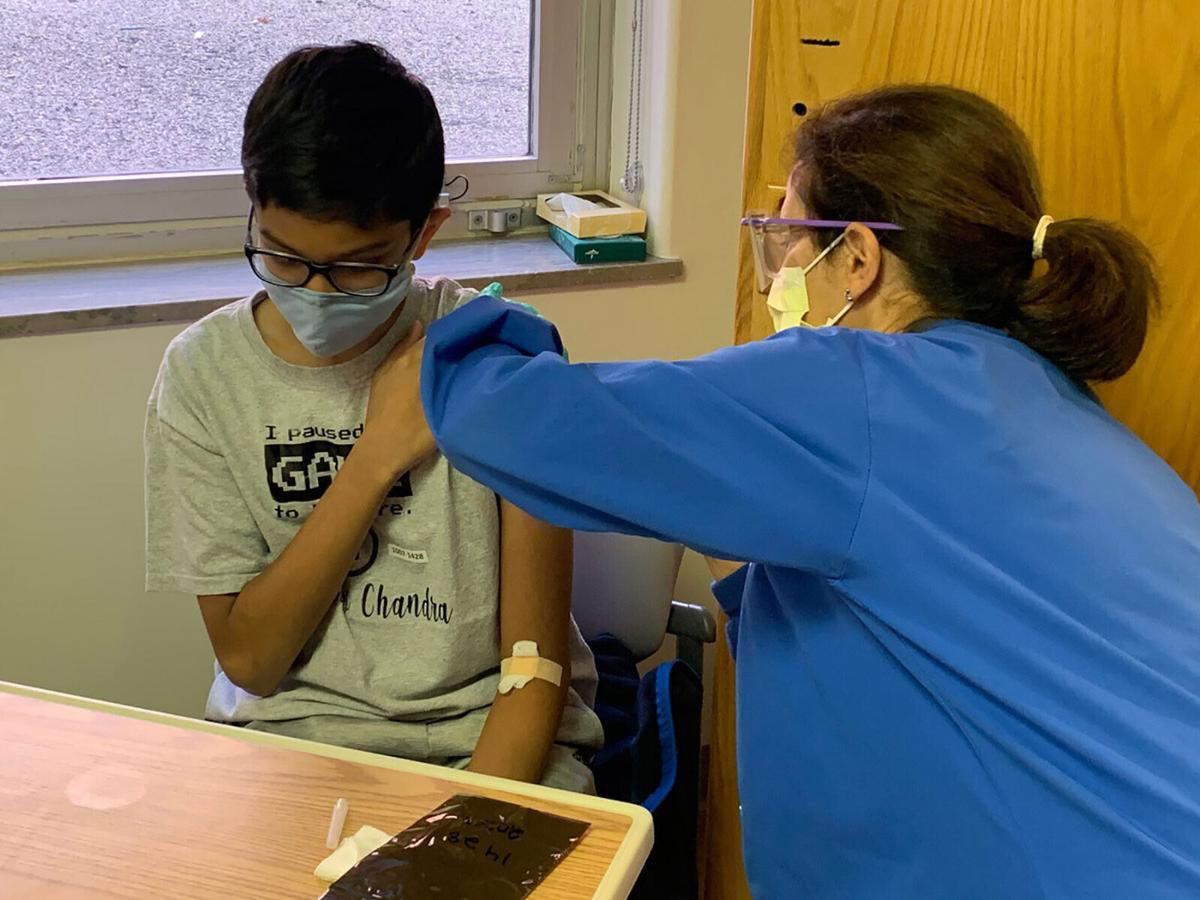 Even younger kids could eventually receive the same experimental prevention as part of expanded trials before long. The FDA requires all drugs submitted for approval have a pediatric plan, but that rule is lenient to the point of being no rule at all. “The plan can be simply ‘We don’t have a plan,’” says Dr. Robert Frenck, director of the Cincinnati Children’s Hospitals Center for Vaccine Research. That means a COVID-19 vaccine tested only in adults and then approved could potentially be prescribed off-label to kids—but doctors don’t especially like that idea.

“It’s a hard sell for pediatricians to say to parents, ‘I have a licensed vaccine that hasn’t been tested in the pediatric age group, but I want to give it to your children,’” says Frenck.

For that reason, he and other doctors are advocating for robust testing in the 12-17 age group, pausing to see how that goes, and, if the results are good, continuing to test in younger cohorts. “We are looking to test in older kids and then age de-escalate, even down to as young as six months,” he says.

For now, they’re a long way from that. Pfizer is currently the only company testing its COVID-19 vaccine in children of any age and the eventual sample group of 2,600 total children is not yet fully assembled. Still, while testing in children is not a requirement for the vaccine to be released and be used in kids, Frenck believes that other vaccine developers will take their cue from Pfizer and develop pediatric testing plans of their own. “My assumption is most of the companies—or many of the companies—will follow suit,” he says.

There are, of course, risks associated with choosing to participate in these studies. No experimental vaccine is 100% safe; determining the degree of risk is part of the reason for field trials in the first place. The Pfizer vaccine does not use a killed or weakened virus to trigger the immune response. Rather, it uses messenger RNA (mRNA) from SARS-CoV-2—the virus that causes COVID-19—which prompts the body’s cells to produce coronavirus proteins. That, in turn, causes the immune system to produce antibodies. A vaccine with no whole virus—killed or weakened—makes some parents more comfortable, but the field trial protocols nonetheless call for warning them of all possible adverse outcomes.

“They sent us a whole 11-page document of all the ifs and whys and hows and whats,” says Evans. “They told us [the side effects] that people got in the Phase 1 trials. And it was like a little bit of achy body. A low-grade fever. Little things like that. Nothing drastic or dire.”

Still, the overall process involves both commitment and a certain tolerance for pain and inconvenience. Subjects are enrolled in the trial for two years and in the early phases must report for periodic blood draws and nasal swabs, followed by half a dozen quicker check-ups over the remainder of the two-year period. None of that thrilled Abhinav.

The families haven’t been happy about some other things either—not least the inevitable Internet trolling that seems to follow even the most virtuous act.

“I’ve gotten a few comments on Facebook—’What kind of mother would let her kids do that?’” says Evans. “But Katelyn has also had teachers and other students in the hallway say, ‘Hey, my gosh, that’s so cool’ and, ‘You’re so brave!’”

Neither the Chandras nor the Evanses feel especially brave, insisting that they trust the science and the assurances of the doctors who explained the risks and the benefits of participating. One thing they do worry about is whether or not their kids are receiving placebo or the actual injection. Laurie Evans frets that the two-year commitment to which Katelyn agreed means that, if she received a placebo she might be discouraged from getting the actual vaccine when it is approved since that would contaminate the ongoing research. Katelyn herself is concerned about that scenario—especially if her school requires kids to be vaccinated in order to attend. Laurie reports that Pfizer has been surprisingly vague on that point so far—not yet spelling out what it will expect from its placebo recipients. But the families have a fail-safe option: “We’re allowed to back out of the trial at any point,” Laurie says.

For now, they have no such plans. The long-ago polio pioneers were lauded as heroes—as they certainly were in an era in which science knew far less about immunology. The COVID-19 pioneers may not receive the same applause, but even if the risks they face are smaller, the nobility of their actions is not.

“We feel like normal, every-day people that are just doing a little teeny-tiny thing that we believe will help lots of people,” says Evans. “Someone has to.”

Write to Jeffrey Kluger at jeffrey.kluger@time.com.