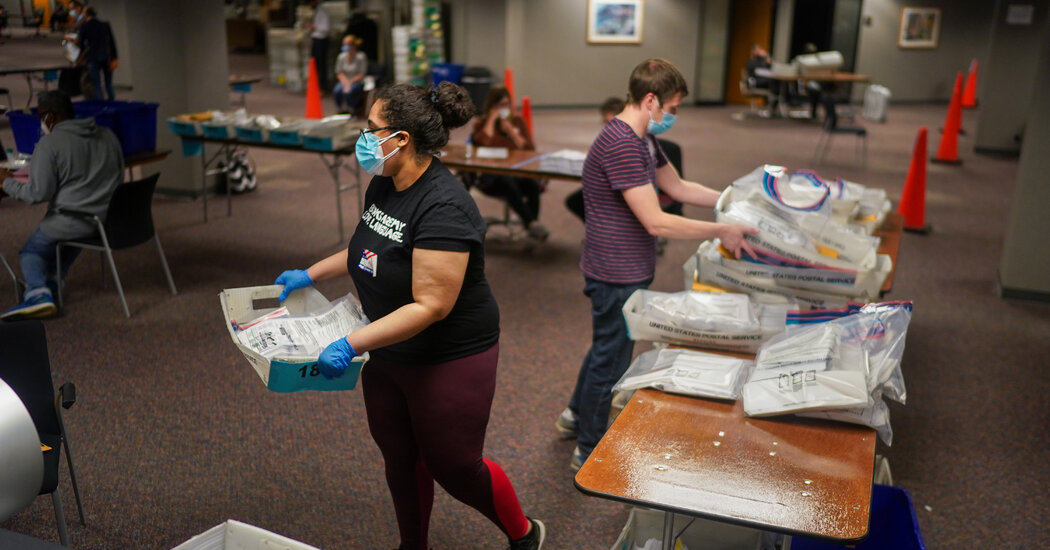 As of 6 a.m. Wednesday, eight states that will decide the next president remained uncalled, as did a handful of Senate races that will determine who controls the chamber.

Here’s where things stand, when you can expect final results, and how to follow along today as this extraordinary election unfolds.

What are we waiting for?

Georgia has two races, both involving Republican incumbents whom Democrats hope to unseat. One, between Senator David Perdue and Jon Ossoff, might be decided in the next few days or might go to a runoff in January, depending on whether a Libertarian candidate gets enough votes to keep both major-party candidates below 50 percent. The other race will require a runoff between the incumbent, Kelly Loeffler, and Raphael Warnock, a Democrat.

When will we know the results?

This will probably vary significantly from state to state. Let’s take them one at a time.

Alaska may well be the last state to be called, because officials there won’t even begin counting mail ballots, or early in-person ballots cast after Oct. 29, for another week. That being said, it’s a red state and isn’t really competitive. Mr. Trump will probably win here pretty easily, and Senator Dan Sullivan, a Republican, probably will too.

Arizona will probably be called soon. Mr. Biden is leading by five percentage points with more than 80 percent of the estimated vote counted, and some news outlets, including The Associated Press and Fox News, have already called it for him. The New York Times and others have not done so, but Arizona officials expect to finish counting ballots on Wednesday, so we shouldn’t be waiting too long for an answer.

Georgia might have been called already if not for a burst pipe at a site in Fulton County where election officials were counting absentee ballots, which delayed the counting process in and around Atlanta.

Mr. Trump was ahead in the state by a little over two percentage points with 92 percent of the estimated vote counted, but the uncounted votes from such a heavily Democratic area could close the gap, and the secretary of state’s office cautioned against relying on the current results given that fact.

Counting should be completed on Wednesday.

Maine has already been called for Mr. Biden, but the race between Senator Susan Collins and her Democratic challenger, Sara Gideon, is still open. Also, Maine is one of two states that divide their electoral votes by congressional district, and the Second District — worth one electoral vote — hasn’t been called yet.

Michigan is one of the most important states left on the map. Mr. Trump has a narrow lead with 77 percent of the estimated vote counted, but most of the remaining votes are in heavily Democratic areas, including Detroit and Grand Rapids. Detroit alone could add 250,000 votes to Mr. Biden’s total, and he is trailing Mr. Trump by a little less than that.

We should get most of the outstanding results on Wednesday.

Those results will also tell us who won the Senate race between the Democratic incumbent, Gary Peters, and his Republican challenger, John James. Mr. Peters is currently trailing by a bit more than Mr. Biden is, but the race is still too close to call.

Mr. Biden has a slim lead in Nevada, but it’s much closer than experts expected going in, and the state will accept mail ballots received through Nov. 10 as long as they were postmarked by Election Day.

Because mail ballots tend to lean Democratic, it’s possible that these could expand Mr. Biden’s margin, but we may not know for a week.

Mr. Trump is narrowly ahead in North Carolina with 95 percent of estimated votes counted. But North Carolina will accept mail-in ballots that arrive through Nov. 12, and it’s possible that the race won’t be called until then.

Just as in Michigan and Wisconsin, there are a lot of uncounted votes in major metropolitan areas of Pennsylvania — including Philadelphia and Pittsburgh — which could allow Mr. Biden to make up his current deficit. But it will be close.

We are sorry to say that we’ll probably have to wait longer here than in Michigan and Wisconsin. While other states are counting through the night, election officials in Pennsylvania are just resuming counting Wednesday morning. The Trump campaign is also fiercely contesting Pennsylvania ballots in the courts, which could drag the process out for quite some time.

Around 5 a.m. Eastern time, Mr. Biden pulled ahead of Mr. Trump in Wisconsin thanks to a new batch of votes from Milwaukee, and cities like Green Bay and Kenosha are still counting mail-in votes, which tend to lean Democratic.

The race is still extremely tight there, but we should have close to complete results Wednesday morning.

What are the candidates saying?

Mr. Biden told supporters a little after 12:30 a.m., “We believe we’re on track to win this election.” But he emphasized the ballots remaining to be counted and did not declare victory.

Mr. Trump, by contrast, made reckless claims at the White House in which he falsely declared victory and threatened to go to the Supreme Court to shut the election down before every valid vote is counted.