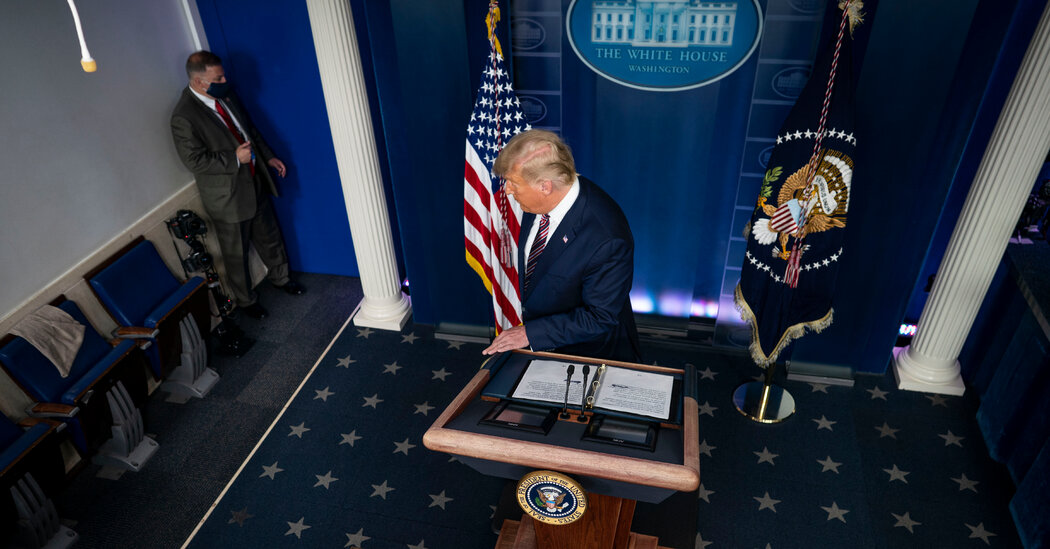 WASHINGTON — Even for President Trump, it was an imagined version of reality, one in which he was not losing but the victim of a wide-ranging conspiracy stretching across the country in multiple cities, counties and states, involving untold numbers of people all somehow collaborating to steal the election in ways he could not actually explain.

Never mind that Mr. Trump presented not a shred of evidence during his first public appearance since late on election night or that few senior Republican officeholders endorsed his false claims of far-reaching fraud. A presidency born in a lie about Barack Obama’s birthplace appeared on the edge of ending in a lie about his own faltering bid for re-election.

“If you count the legal votes, I easily win,” Mr. Trump said Thursday night in an unusually subdued, 17-minute televised statement from the lectern in the White House briefing room, complaining that Democrats, the news media, pollsters, big technology companies and nonpartisan election workers had all corruptly sought to deny him a second term.

He convinced few people who were not already in his corner. Most of the television networks cut away from the statement on the grounds that what Mr. Trump was saying was not true. On CNN, former Senator Rick Santorum of Pennsylvania, a Republican often put in the position of defending Mr. Trump over the years, appeared exasperated as he denounced the president’s loose talk of election thievery as “dangerous” and “shocking” and declared that “counting absentee ballots and counting mail-in ballots is not fraud.”

“There is no defense for the President’s comments tonight undermining our Democratic process,” Gov. Larry Hogan, Republican of Maryland and a critic of the president, wrote on Twitter. “America is counting the votes, and we must respect the results as we always have before. No election or person is more important than our Democracy.”

Former Gov. Chris Christie, Republican of New Jersey and a longtime ally of Mr. Trump’s, likewise disputed the president. “I talk tonight now not as a former governor but as a former U.S. attorney — there’s just no basis to make that argument tonight,” he said on ABC News. “There just isn’t.”

With his presidency on the line, Mr. Trump’s lonely appearance in the briefing room with no allies joining him and only staff members and reporters in attendance underscored how isolated he has become just two days after Election Day. With vote counts in key states turning grimmer even as he spoke, Mr. Trump was poised to end this term in office the way he began his presidential campaign in 2015 — defended most vocally by family members and a few loyalists while Republican leaders held him at arm’s length rather than embrace outlandish claims.

With Republican members of Congress largely staying silent or issuing anodyne comments about the importance of transparent vote counting, Mr. Trump was left to dispatch his two adult sons to hold news conferences in Pennsylvania and Georgia to protest aspects of the vote count. They were accompanied by allies like Rudolph W. Giuliani, his personal lawyer, and Corey Lewandowski, his first campaign manager from 2016. The same scene played out in Nevada, where a Trump ally, Richard Grenell, made claims about voting fraud that news outlets debunked a short time later.

Members of Mr. Trump’s inner circle sounded almost desperate as they sought to threaten other Republicans into backing Mr. Trump. Both Donald Trump Jr. and Eric Trump posted messages on Twitter complaining that Republicans were not standing with their father, especially those who may want his support if they run for president in four years.

“The total lack of action from virtually all of the ‘2024 GOP hopefuls’ is pretty amazing,” Donald Trump Jr. wrote. “They have a perfect platform to show that they’re willing & able to fight but they will cower to the media mob instead.”

“Where are Republicans!” Eric Trump added about an hour and a half later. “Have some backbone. Fight against this fraud. Our voters will never forget you if your sheep!”

Brad Parscale, who was removed this year as the president’s campaign manager, echoed the theme in more menacing terms. “If you want to win in 2024 as a Republican,” he wrote, “I would probably start saying something.”

After Donald Trump Jr. went after Senator Lindsey Graham, Republican of South Carolina, for not speaking up, the senator went on Sean Hannity’s show on Fox on Thursday night and came to the president’s defense, asserting with no evidence that “Philadelphia elections are crooked as a snake” and that the “allegations of wrongdoing are earth shattering.”

Others like Senators Ted Cruz of Texas and John Barrasso of Wyoming offered support for Mr. Trump’s insistence that election observers be allowed to watch counting, which in general they are, without embracing the claims that the election was being stolen. “The president is right to ensure all legally cast votes be observed and counted,” Mr. Barrasso said.

But they were among the few who spoke up to echo Mr. Trump’s refrain that he was being denied his due in the form of winning the election, a primal scream emanating from the president that was summed up earlier in the day by his own angry, plaintive, all-caps tweet: “STOP THE COUNT!”

Allies said privately that the president seemed to be raging against the inevitable and was only doing damage with his baseless accusations about widespread fraud. Even allies who said they shared some of his concerns in a targeted way about specific rules governing mail-in voting during the coronavirus pandemic were unwilling to join Mr. Trump’s unfounded claims.

Many of those who did comment merely said they wanted “transparency” or for all “legal” votes to be counted, a phrase used by Vice President Mike Pence on Twitter that was intended to sound as if he was echoing Mr. Trump. Inside Mr. Trump’s circle, Kellyanne Conway, his former counselor, was one of the few who spoke of counting all of the votes.

For much of the year, some Trump advisers questioned whether the president actually wanted a second term, or if he simply did not want to be seen as the worst epithet in his lexicon: a loser. The answer still was not clear as the votes were being tallied this week.

He sounded dejected on Thursday evening as he went through a litany of random minor incidents involving ballots, called Philadelphia and Detroit “corrupt” and insisted he had actually won an election in which former Vice President Joseph R. Biden Jr. was leading by millions of votes nationally and appeared likely to assemble a majority in the Electoral College once a handful of swing states finished counting.

Mr. Trump bemoaned how many by-mail votes appeared to be cast for Democrats. “They’re finding ballots all of a sudden: ‘Oh, we have some mail-in ballots,’” he said. “It’s amazing how those mail-in ballots are so one-sided.” He glossed over the fact that he had spent months telling his supporters that mail-in balloting was corrupt and urging them to vote in person instead.

He likewise lashed out at others, as well, seeking many to blame for his troubles. “The pollsters got it knowingly wrong,” he said. (In fact, they did get many results wrong, but there is no evidence that it was intentional.)

“The voting apparatus of those states are run in all cases by Democrats,” he said of states still counting. (In fact, Georgia and Arizona have Republican governors.)

“We won a case, a big case,” he said. (In fact, the campaign simply won a court ruling saying that observers should be allowed to stand six feet away from counting rather than farther away.)

After he was done, the president took no questions from reporters and marched out of the room, looking glum. It was the kind of appearance that several aides had said made them happy he had remained out of public view since the early hours of Wednesday morning, when he insisted he had won the election as several key states still had not had a projected winner and called what was taking place a “fraud” on the American public.

The Trump campaign is filing a series of lawsuits, but allies of the White House have said the approach seems to be aimed at both running out the clock and appeasing a litigious president, who often turns to legal filings as an immediate course of action.

But while Mr. Trump has some experienced lawyers and political professionals leading his campaign, the public effort to raise questions about the election has been disjointed and appeared thrown together at the last minute. Some administration officials said they were mortified by footage of Mr. Giuliani bellowing in Philadelphia.

Some of Mr. Trump’s allies have encouraged the call for a blitz of legal action, including people like Stephen K. Bannon, the former White House chief strategist who faces criminal charges for an allegedly fraudulent scheme scamming supporters of Mr. Trump’s border wall.

Republicans have begun having discussions about how to broach the topic with Mr. Trump of focusing on life after the presidency, and what leaving quietly could mean for his family, his business and his own ability to remain in politics.

Some have suggested that sounding notes of encouragement about a 2024 campaign could be effective. Others believe that he will concede if it is clear he has lost, but that he will most likely never publicly accept the result.

In the meantime, Mr. Trump’s advisers were divided on what he should be doing until the final vote counts are announced. There were some discussions about his holding a rally as soon as this weekend, one person briefed on the talks said.

But after Mr. Trump’s briefing room appearance, several advisers conceded that the clock on the Trump presidency was almost certainly winding down.