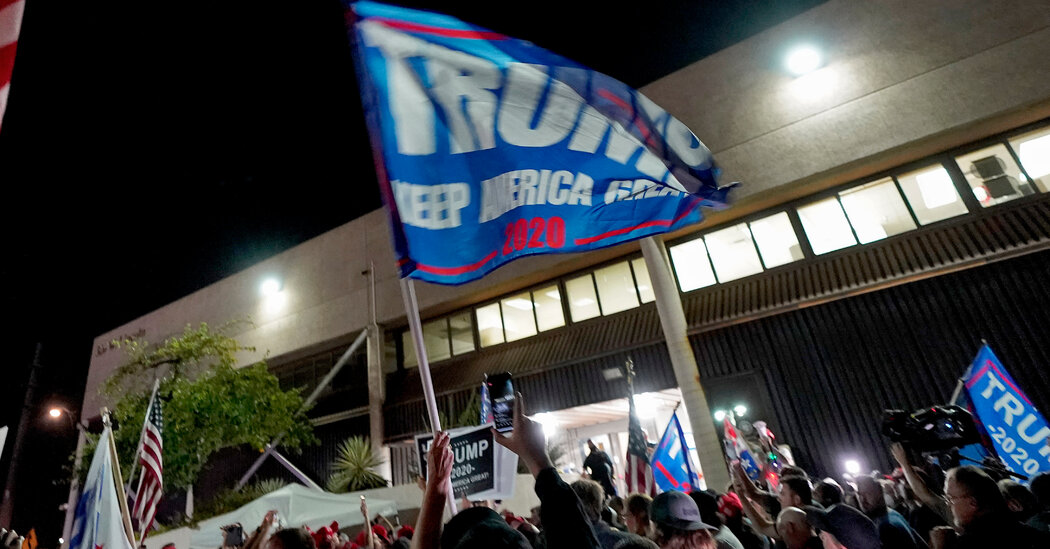 PHOENIX — More than 150 supporters of President Trump, some of them armed, gathered outside the Maricopa County election office on Wednesday and chanted “Count the vote,” as officials did just that under the protection of sheriff’s deputies.

Early results in Arizona show Joseph R. Biden Jr. in the lead, but Trump supporters believe that could change as the last votes are counted.

Keely Varvel, chief deputy recorder for Maricopa County, said counting would continue despite the protest. “We are still planning to finish up our scheduled ballot processing work and report out more results tonight,” Ms. Varvel said.

Without citing evidence, some Republicans have accused election officials of manipulating the results to indicate that Mr. Trump is losing in Maricopa County, which is home to about 60 percent of Arizona’s population.

“The only way Biden can win Arizona is through fraud,” said Jim Williams, 67, a welder who attended the protest. “I won’t accept a Biden victory. I don’t want to live under Communist rule.”

Many in the crowd were holding Trump flags, and numerous people were wielding AR-15 rifles and other firearms. Some also chanted “Fox News sucks,” reflecting their displeasure with the network’s decision on Tuesday to call Arizona for Mr. Biden, a move that some other news outlets later followed.

The last time a Democratic presidential candidate won Arizona was Bill Clinton in 1996, and Maricopa County has not voted for a Democrat for president since 1948. But demographic changes have transformed Arizona into a battleground state.