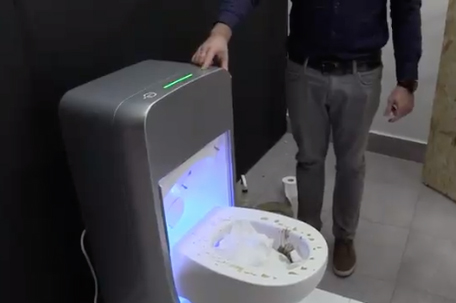 This is evo-loo-tion at work.

In a recent video from Pamplona showcasing the bathroom upgrade’s capabilities, the pioneering potty is loaded with a Himalayan-size mound of imitation refuse and toilet paper. Then, instead of swirling it away normally, the john retracts into a dishwasher-esque device that, according to Reuters, automatically cleans, dries and disinfects it with ozone gas after each use.

The clip concludes with the toilet springing back into place, looking like it’s never been used. Best of all, the cleaning process only requires two liters of water — around a third of what the average toilet uses with each flush.

A self-scouring smart throne could prove invaluable during the coronavirus epidemic, where the virus has been shown to spread via traditional flushing.

Nearly 300K children were targeted by predators on Twitch: report