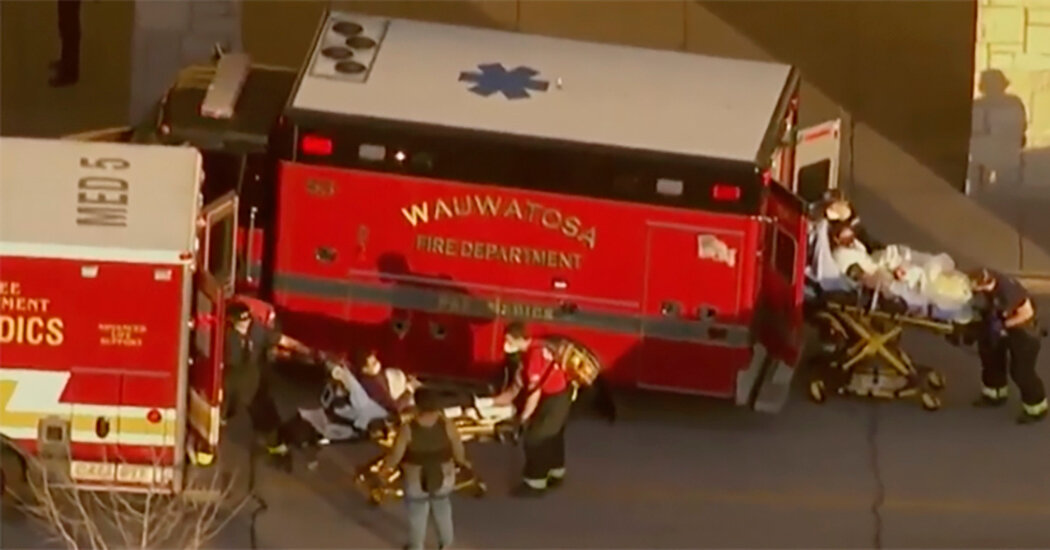 Eight people were hurt in a shooting at a mall near Milwaukee on Friday afternoon, and the gunman remained at large, the authorities said.

Dennis McBride, the mayor of Wauwatosa, Wis., said that the shooting happened at the Mayfair Mall and that those hurt did not have life-threatening injuries. He said it was not clear that those hurt were gunshot victims.

The police chief, Barry Weber, said at a news conference on Friday evening that seven adults and one teenager were injured and that there were no known fatalities. Details on the victims’ conditions and ages were not released.

The gunman was gone by the time the authorities arrived, officials said.

The shooting, which was reported around 2:50 p.m. local time and happened near an entrance to Macy’s, apparently resulted from a fight and was not a “random act,” the Wauwatosa police said.

“We will continue to work diligently to interview the many witnesses, as well as the victims who were injured, to identify and apprehend the suspect,” the police said in a statement on Friday night.

Mr. McBride said that the mall, which is Wauwatosa’s largest taxpayer, is the busiest in Milwaukee County. It will remain closed on Saturday, the police said.

Lindsay Kahn, a spokeswoman for Brookfield Properties, the owner of the mall, said in a statement: “We are disheartened and angered that our guests and tenants were subject to this violent incident today. We are thankful for our partners at the Wauwatosa Police Department and we are cooperating with them as their investigation develops.”

Both Froedtert Hospital and Children’s Wisconsin said that they were notified of a shooting at the mall and that both hospitals’ trauma teams were prepared to receive patients, a spokeswoman, Nalissa Wienke, said.

Ashley Kenworthy, 17, who works at Aerie, a clothing store in the mall, said she was behind the register when she saw two people run into the store, yelling that there was a gunman.

One of the employees quickly told other store workers, using a walkie-talkie, that there was a shooting, and they ran to a stock room with about a dozen customers and locked the door.

“I just saw people running back to the back room, and so I just stopped what I was doing and ran back there,” Ms. Kenworthy said.

He turned around and ran to a store where he and about a dozen other people closed the front gate, went to a storage closet and hid.

Mr. Perry said that he and everyone with him were uninjured, and that the shooting sounded as if it had come from one individual who took time to reload.

“I was shaken up due to hurrying up and trying to close the doors,” said Mr. Perry, calling from his hiding place. “But we’re OK.”

Gordon Lugauer, owner of Board Game Barrister, said he also heard two bursts of gunfire. One round came into the store.

One customer who was waiting just outside the store was shot, and several others, some of them wounded, were on the floor.

“Which of those were wounded and which were tending to the wounded, I don’t know,” he said.

Mr. Lugauer and other employees escaped out a back exit and escorted a wounded customer to safety.

The police arrived shortly after the gunfire erupted, he said. Once he got outside, Mr. Lugauer said, he noticed that one of his employees had not emerged.

Mr. Lugauer went back in to find the employee, who was helping one of the wounded.

“Everyone’s shaken up,” he said.

Also in Wauwatosa this week, a city police officer who fatally shot an armed Black teenager in February and, since 2015, killed two other men while on duty, agreed to resign, the city said on Tuesday night.

Joseph Mensah, a Black police officer in the Wauwatosa Police Department, agreed to resign on Nov. 30 as part of a “separation agreement” with the Wauwatosa Peace Officer’s Association, the police union, and the Common Council, the governing body of Wauwatosa.

“Now is the time for all of us to come together and heal,” the mayor said in a statement on Tuesday. “We’ve made substantial progress during 2020, and in the coming year we’ll continue to focus on positive change for our community.”