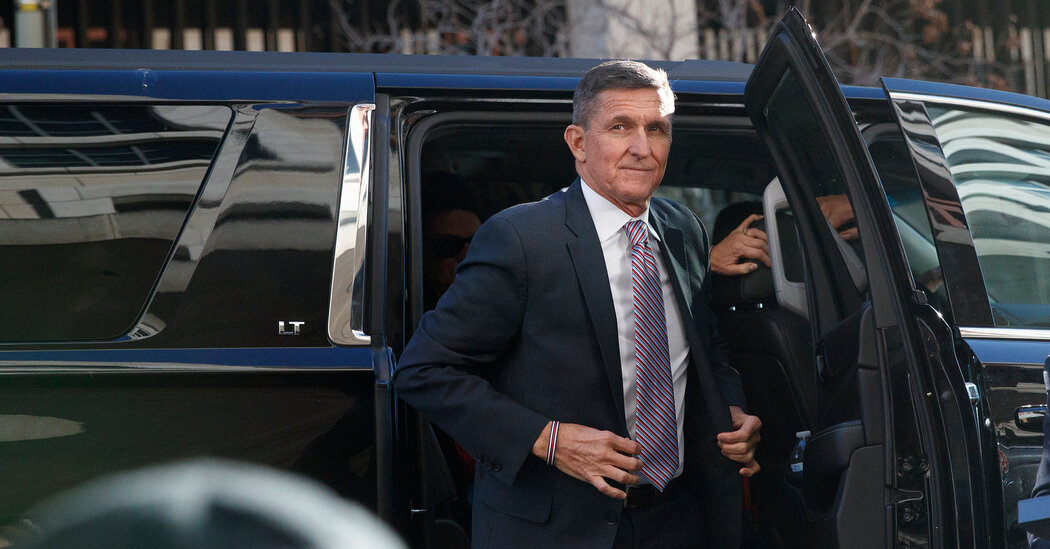 President Trump has told aides that he plans to pardon his former national security adviser Michael T. Flynn and that it is one of a string of pardons he plans to issue before leaving office, a person familiar with the discussions said on Tuesday.

Mr. Flynn, a retired Army lieutenant general, twice pleaded guilty to lying to the F.B.I. about his conversations with a Russian diplomat during the presidential transition in late 2016 and early 2017. He was the only former White House official to plead guilty in the inquiry led by Robert S. Mueller III, the special counsel investigating Russia’s election interference.

In May, the Justice Department sought to withdraw its charges against Mr. Flynn. That move has since been tied up in federal court, challenged by the judge who presided over Mr. Flynn’s case, Emmet G. Sullivan.

Mr. Flynn, 61, served just 24 days as Mr. Trump’s national security adviser before the president fired him in February 2017 for lying about his contacts with the Russian ambassador to the United States at the time, Sergey I. Kislyak.

Mr. Flynn changed his legal team last year and began seeking to withdraw his guilty plea, claiming he never lied to investigators and was the target in January 2017 of what his lawyers in court papers called an “ambush-interview” by F.B.I. agents seeking to entrap him. He has since become a hero figure on the pro-Trump right, portrayed as a decorated patriot victimized by the politically motivated Russia “hoax” investigation of Mr. Trump.

Mr. Trump, who initially distanced himself from Mr. Flynn after his firing, has since taken up his cause, calling him “an innocent man” targeted by Obama administration officials trying to “take down a president.”

“What happened to General Michael Flynn, a war hero, should never be allowed to happen to a citizen of the United States again!” Mr. Trump tweeted in April, weeks before the Justice Department sought to withdraw its charges. After the department acted, Mr. Trump tweeted his approval, writing on May 8, “Yesterday was a BIG day for Justice in the USA.”

In a late September hearing before Judge Sullivan, a lawyer for Mr. Flynn, Sidney Powell, reluctantly admitted that she had recently spoken to Mr. Trump about the case, but said she had asked the president not to pardon her client.

Ms. Powell has appeared alongside lawyers for Mr. Trump, including Rudolph W. Giuliani, to press an unfounded case of election fraud. But after Ms. Powell floated a set of particularly wild claims, Mr. Giuliani and another lawyer representing the Trump campaign, Jenna Ellis, said in an abrupt statement on Sunday that Ms. Powell “is not a member of the Trump legal team.”

Mr. Flynn has been awaiting a ruling from Judge Sullivan on the Justice Department’s motion to withdraw its charges. The motion raised alarms among career prosecutors about political influence at the department.

Mr. Flynn has said he does not recall his conversations with Mr. Kislyak. But transcripts declassified in May show that they were extensive, and that in three phone calls the men discussed how Washington and Moscow might improve ties; how Russia should respond to punitive actions by the departing Obama administration in response to Russia’s election interference; and a United Nations resolution to condemn Israeli settlements on the West Bank.

Many departing presidents have issued pardons and commutations near the end of their terms. Former President Bill Clinton drew particularly harsh criticism over his pardon of a wealthy Democratic donor in his final White House hours. But Democrats and legal experts fear that Mr. Trump will exercise his pardon power with a brazenness that shatters past precedent — possibly even by prospectively pardoning himself.

Mr. Trump has already commuted the sentence of Roger J. Stone Jr., another associate ensnared in the Russia investigation who was convicted on seven felony counts and was to begin a 40-month term in federal prison.

A Justice Department spokeswoman declined to comment on reporting that Mr. Trump has told confidants that he plans to pardon Mr. Flynn.

Word of Mr. Trump’s intentions came on a day the president presided over the annual White House turkey pardon. Mr. Trump ignored shouted questions from reporters in the Rose Garden about whether he planned actual pardons before leaving office.