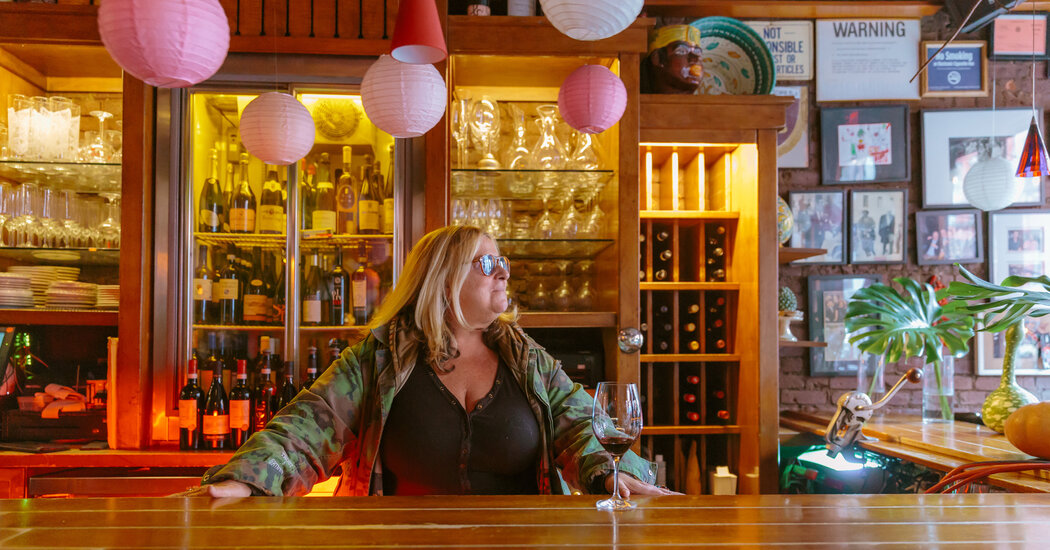 In this series for T, the author Reggie Nadelson revisits New York institutions that have defined cool for decades, from time-honored restaurants to unsung dives.

I’m sitting at a table outside Il Posto Accanto eating grilled calamari prepared by Beatrice Tosti di Valminuta, the restaurant’s co-owner, whom I like to think of as the empress of East Second Street. Though she was born in Rome, Bea, as she’s known, is a quintessential New Yorker. She also makes some of the best Italian food in the city, as many would agree.

The squid glistens with extra virgin Sicilian olive oil. Next to it sits a side of sautéed broccoli rabe purchased just this morning at the Union Square Greenmarket, where Tosti di Valminuta — often wearing her coat embroidered with the Virgin of Guadalupe, her blond hair bouncing on her shoulders and the tattoos around her waist revealed when her shirt pulls up from her signature long skirts — is a familiar presence. She goes from one stall to the next inspecting the day’s offerings, her string bag stuffed with the prettiest greens, the most alluringly fresh fish and maybe a lemon cake for the staff to snack on.

With her husband, Julio Pena, Tosti di Valminuta has run Il Posto since 1999. The couple also operated a restaurant, Il Bagatto, in the neighboring building from 1995 but closed it in 2013 to concentrate on Il Posto Accanto, or the “Place Next Door.” They wanted a compact space where Tosti di Valminuta could experiment with small plates as well as pastas, and where, says Pena, “we could focus all our love.”

In good times, Il Posto, on East Second Street between Avenues A and B, can seat 45 guests at its long polished wood bar and handful of high-top tables, where people linger over brunch until four in the afternoon, and when the weather’s fine, the French doors are left open to the sidewalk. During the pandemic, the number of indoor diners is limited but there are extra tables on the street and a sheltered area with electric heaters; painted on its wood floor is the word “love,” a work the couple commissioned from the legendary New York graffiti artist Lee Quiñones.

Nominally, Il Posto Accanto is a wine bar, and it does have a great selection of Italian vintages, but in essence it is much more like a Roman trattoria. It is a neighborhood joint with food so spectacularly good that people come from everywhere to experience Tosti di Valminuta’s spaghetti carbonara, linguine vongole, delicately fried anchovies, mussels with Tuscan cannellini beans, saltimbocca, eggplant croquettes, Roman-style tripe and almond cake topped with mascarpone gelato. For her Bolognese, Tosti di Valminuta cuts the veal shoulder, beef chuck and pork herself by hand, just as it was done back home. “Romans always remembered that you didn’t know what you were getting if you purchased ground meat during the war,” she says, referring to World War II. “If you cut it yourself, it tastes better.”

Anyone who loves to eat in New York discovers Il Posto sooner or later, almost always thinking of it as their secret. But in fact it’s the community, the tribe, that Tosti di Valminuta and Pena have cultivated here that puts it among the places that make New York worth living in. The couple’s regulars include artists and actors, students and models, cops and construction workers, Italian writers, Argentine bankers and a cohort of journalists from The Associated Press, including Maria Sanminiatelli, a longtime friend of Tosti di Valminuta’s. “Posto is a place for a regular brunch on weekends with friends, for being a member of the congregation in the church of the perfect cook,” says Michael Gilsenan, an anthropologist who teaches at N.Y.U. and is a discerning gourmand. “It all takes impeccable buying and sourcing, hours of preparation and is cooked con amore.”

Spotting that I’ve finished my calamari, Tosti di Valminuta sways over in my direction. “Senti, sweetheart, what would we like to eat next?” she asks. “Maybe some meatballs, just one?” It’s a voice regulars recognize instantly — warm, witty and with a silver trill of laughter in it.

“Bea and Julio have a magic place. You feel welcome, sure you have what you need and their attention,” says David Ores, who runs a family medical practice across the street. Known to everyone as Dr. Dave, he had been coming here for most of the past decade until he realized, recently, that he was so addicted to Tosti di Valminuta’s cooking that he needed to take himself off it for several weeks. “I could eat her pasta seven times a day,” he says. “At Il Posto, there is a feeling of unprovoked joy and love that you are there and participating in this shared time.”

Food and love are inextricably linked in Tosti di Valminuta’s world. “I am a cook not a chef,” she always says, by which I think she means that preparing food is personal, that she herself has been to the market, that she cooks it as she would in her own house. Someone once asked me if she was sort of a nonna, an Italian grandmother, an idea I quickly shut down. “Empress” is a far better description, more appropriate to a woman who is as joyous and even sometimes a little imperious as her beloved Rome. Indeed, she adores all of southern Italy — Puglia, Naples — and Sicily. But mention that you love Venice or Milan and she will raise an eyebrow and say, dismissively, “Austria!”

She speaks four languages and is deeply knowledgeable about food, wine, film, Italy and history. “Everyone who goes to Il Posto is a friend, all of us vying for Beatrice’s attention because she is so smart and wickedly funny,” says Sanminiatelli. “Bea is an explosion of charisma.” You want Tosti di Valminuta to like you, and that ineluctable charm makes you feel that you alone are the object of her affection, though it seems to me that she also keeps a little part of herself for herself, for Julio and for her dogs. “I feel like all her empathy and love comes through in the cooking, in her cacio e pepe, Americana and Sorrentina pastas,” adds Sanminiatelli. “She takes so much care.”

As a child in the 1970s, Tosti di Valminuta wasn’t allowed near the kitchen of the vast apartment where she grew up, not far from Rome’s Via Veneto. Her family was part of both the Roman bourgeoisie, with its obsessive manners, and the country’s ramshackle aristocracy. But she was always different, and she always wanted a restaurant. Her mother just hoped she would diet.

“I’m chubby because I love to eat,” Tosti di Valminuta likes to say. Joy for her as a child was visiting her grandfather’s estate in Chianti. When a pig was slaughtered for the family’s annual Christmas feast there, she recalls, out of respect for the animal every part would be used and even the lard employed for frying potatoes.

After college, Tosti di Valminuta came to New York and worked various jobs, all the while cooking for friends (often spaghetti with lobster) in her tiny studio apartment and longing for her own restaurant. One evening in 1992, at the since-closed bistro Lucky Strike on Grand Street, “I saw a very pretty girl in a long leather skirt dancing by herself,” remembers Pena, a born New Yorker of Dominican ancestry who was taking a break from managing supermarkets. The pair went on to Save the Robots, a fondly remembered underground club on Avenue B, and they’ve been together ever since. “A few nights later she invited me for dinner and I never left,” says Pena. They were married the next year, and opened Il Bagatto in 1995, when the East Village was still a changing neighborhood.

From the beginning, the couple cleaned the restaurant themselves and Tosti di Valminuta prepped everything with her own hands. They have remained true partners and loyal, too, to Tosti di Valminuta’s ambition “to cook like in Rome where the food is always kick-ass and everybody eats at home.”

Twenty-five years later, this combination of food and feeling has become a kind of legend, and a sustaining force during a difficult chapter for the city and its restaurants. “People supported us during the lockdown,” Pena says. “They bought gift certificates they would never use. So now, when someone is having a hard time, and there’s plenty of that, they know there’s always a bowl of pasta and a glass of wine for them at Il Posto.”