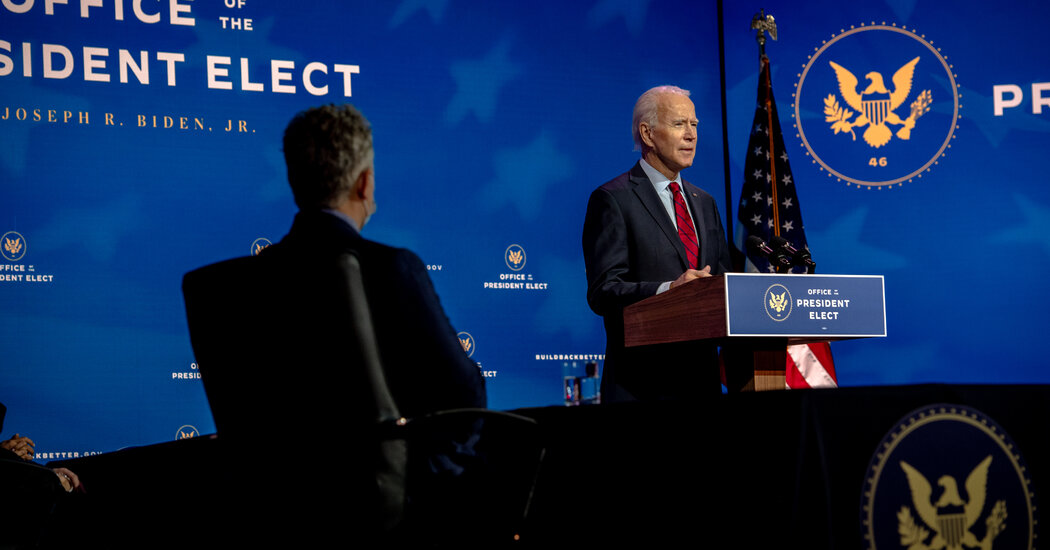 WASHINGTON — President-elect Joseph R. Biden Jr., setting ambitious goals to change the course of the coronavirus pandemic, vowed on Tuesday to get “at least 100 million Covid vaccine shots into the arms of the American people” during his first 100 days in office, and said he would make it a “national priority” to get children back to school during that time.

The pledge, which Mr. Biden made while introducing the members of his health team in Wilmington, Del., tracks with the goals set by President Trump.

But in creating clear benchmarks for himself, Mr. Biden is taking a risk. He will undoubtedly be held to the 100 million promise at the 100-day mark on April 30, and fulfilling it will require no hiccups in manufacturing or distributing the vaccine and a willingness by Americans to be vaccinated.

Mr. Biden’s announcement came as fresh details emerged about how Pfizer, the pharmaceutical giant whose vaccine could receive regulatory approval in the United States this weekend, repeatedly urged the Trump administration to lock in a bigger supply. Before the vaccine was proved highly successful in clinical trials, the administration repeatedly turned down the chance to expand its pre-order beyond the 100 million doses it agreed to buy from Pfizer last July.

The administration is now seeking to double the pre-order; otherwise it will run out of Pfizer’s vaccine by around March, according to people familiar with the talks. But Pfizer may not be able deliver more doses for Americans until as late as June because the company signed deals with other governments, including the European Union, as the Trump administration hesitated.

Pfizer, an American company, could face a consumer backlash if countries in Europe or elsewhere are using its vaccine to save lives while Americans are forced to wait. But Trump administration officials, trying to hedge their bets among six vaccine makers, were unwilling to commit too heavily to Pfizer.

Moderna, based in Cambridge, Mass., is close behind Pfizer and could win authorization for its vaccine this month. Like Pfizer’s, its federal contract calls for it to deliver 100 million doses by the end of the first quarter.

Both vaccines require two doses, so together those supplies would presumably cover 100 million Americans by the spring. Moderna has said it expects to produce at least another 400 million doses next year, but it is unclear how many the U.S. government could claim.

At a vaccine “summit” Tuesday at the White House, Mr. Trump signed an executive order that he said would “ensure that the United States government prioritizes the getting out of the vaccine to American citizens before sending it to other nations.” But the order appeared to have little teeth. Mr. Trump also said he would invoke the Defense Production Act to produce additional vaccine but did not say how.

Mr. Biden’s team is apparently counting on Pfizer’s and Moderna’s pledges to the Trump administration to deliver on Mr. Biden’s 100 million vaccination promise. His advisers note that the promise is for 100 million doses — not 100 million people vaccinated.

A third vaccine maker, Johnson & Johnson, could report results from its clinical trials within weeks, while a fourth company, AstraZeneca, is still enrolling participants in its trial in the United States. Two other companies included in the Trump administration’s crash program for vaccine development, Novavax and Sanofi, have yet to begin their clinical trials.

Mr. Biden’s vaccine timeline is achievable, but it may be optimistic.

“Distribution has to be seamless all across the U.S., and that means every state and local health department coordinating,” said Dr. Leana Wen, the former Baltimore health commissioner. “And there’s the issue of public trust. So I certainly hope that it happens, but its very optimistic.”

In addition to the vaccine promise, Mr. Biden implored Americans to wear masks for his first 100 days in office, and said he would make doing so a requirement in federal buildings and on planes, trains and buses that cross state lines.

“My first 100 days won’t end the Covid-19 virus — I can’t promise that,” Mr. Biden said. But he added, “I’m absolutely convinced that in 100 days we can change the course of the disease and change life in America for the better.”

The senior officials Mr. Biden will appoint — including Xavier Becerra, a former congressman who is now the California attorney general, as his nominee for secretary of health and human services — will face the immediate challenge of slowing the spread of the coronavirus, which has already killed more than 285,000 people in the United States and has taken a particularly devastating toll on people of color.

To address those disparities, Mr. Biden has created a “Covid-19 equity task force.” It will be led by Dr. Marcella Nunez-Smith, an expert in health equity at Yale University Medical School who described the U.S. Virgin Islands, where she was raised, as “a place where people too often die, too young, from preventable conditions.”

The event was the first time that Mr. Becerra and other candidates chosen by Mr. Biden — some appearing virtually and others in person — had spoken in public alongside him. Most, including Mr. Becerra, a son of immigrants, shared their personal stories. Dr. Vivek Murthy, who will reprise his role from the Obama administration to serve as Mr. Biden’s surgeon general, offered greetings from his grandmother.

Dr. Anthony S. Fauci, who will be Mr. Biden’s chief medical adviser in addition to continuing in his role as the director of the National Institute of Allergy and Infectious Diseases, participated by video, saying he also needed to attend a ceremony for a colleague at the National Institutes of Health, Dr. Harvey J. Alter, who had won the Nobel Prize in Medicine — “a reminder,” Dr. Fauci said, “of America’s place as a pioneer in science and medicine.”

While Dr. Fauci is looking forward to serving in his seventh administration, another of Mr. Biden’s key appointees — Dr. Rochelle Walensky, the chief of infectious diseases at Massachusetts General Hospital, who will lead the Centers for Disease Control and Prevention — has never served in government.

She will face the herculean task of restoring morale and the reputation of an agency that has been silenced and battered by the Trump White House.

“Every doctor knows that when the patient is coding, your plans don’t mater — you answer the code,” Dr. Walensky said. “And when the nation is coding, if you are called to serve — you serve.”

Also on hand Tuesday was Jeff Zients, the incoming coordinator of the Covid-19 response. Mr. Biden has yet to name his candidates for other health posts, including the commissioner of the Food and Drug Administration and the director of the Centers for Medicare and Medicaid Services.