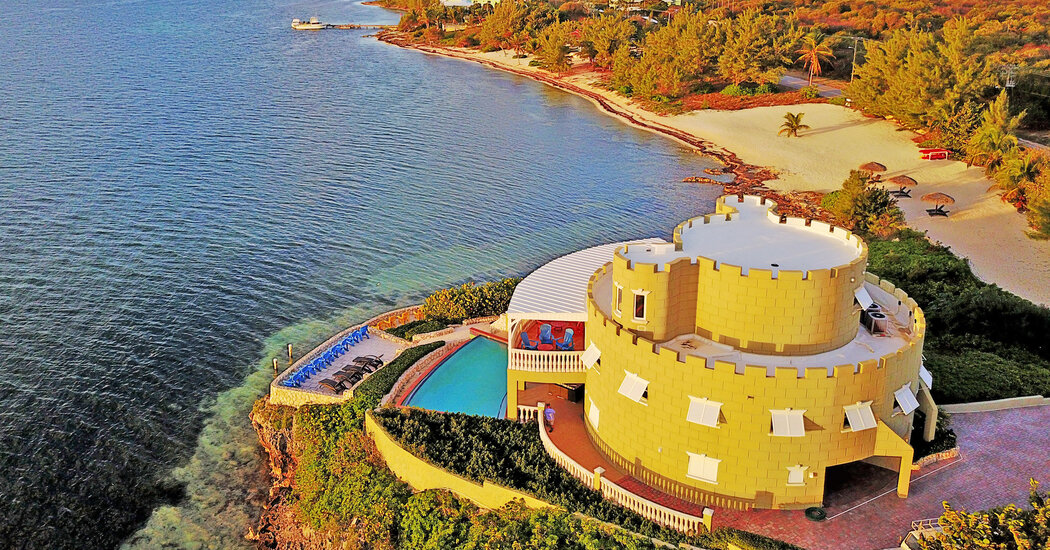 A Five-Bedroom Concrete Circle in the Caymans

Cayman Castle, a gated and walled villa with a dollop of medieval whimsy, juts into the Caribbean Sea from the southeastern coast of Grand Cayman, the largest of the three Cayman Islands.

Built in the 1980s on a 1.75-acre beachfront lot and fully renovated in 2005, the property has two residences: a five-bedroom main house with approximately 4,000 square feet, and a two-bedroom guesthouse with about 1,300 square feet. Both have swimming pools and extensive terraces and decks. The lot sits on 450 feet of shoreline, including 150 feet of private white-sand beach.

“Everyone on the island knows Cayman Castle — it’s a landmark,” said the seller, Jim Leavitt, who owns a property management company on Grand Cayman.

He added that the main house, built from concrete, withstood Hurricane Ivan in 2004: “We didn’t lose one window or door.”

A driveway leads to a stone parking area and a one-car garage between the two houses. The three-story main house is designed like a circular fortress, complete with a crenelated roof. The ground floor has a laundry room and two bedrooms, each with an en suite bath. One of the bedrooms has a sitting area and opens to a broad covered terrace overlooking the sea. The second, with bunk beds, is tucked into the center of the house.

Gently curved stairs lead up to the living areas on the second level. The semicircular living and dining room, 50 feet in diameter, has white sofas and access to a covered waterfront terrace with dining and seating areas. The home is being sold furnished, and was recently outfitted with items from Restoration Hardware, said Patty Nugent, an agent with Cayman Islands Sotheby’s International Realty, which has the listing.

The open kitchen is separated from the living and dining area by a breakfast counter, and doors on either side lead to two bedroom suites. A spiral staircase in the living room leads up to the master suite, which has two sets of sliding doors leading lead to a covered terrace overlooking the pool, garden and sea.

“What we appreciate about Cayman Castle is the visual privacy, beach and boating access, elevated 220-degree views and the easterly breeze that makes a screen porch unnecessary,” Mr. Leavitt said.

The property, just outside the village of East End, is zoned as beach resort/residential and could function as a business, Ms. Nugent said. Dive shops, groceries, restaurants, windsurfing beaches, resorts and nightlife are within a 15-minute drive. George Town, the Cayman Islands’ capital city, is 30 minutes west and has an international airport.

“While we enjoy our privacy, we are not remote,” Mr. Leavitt said.

The Cayman Islands, a British Overseas Territory known the world over as a business haven thanks to its near total lack of taxation, is home to around 65,000 residents. Jeanette Totten, a broker with ERA Cayman Islands and the outgoing president of the Cayman Islands Real Estate Brokers Association (CIREBA), said the years leading up to the pandemic were a strong seller’s market, with vacation-home prices growing an average of 15 percent a year.

“We were expecting a big increase when all this hit,” she added. “We were really going gangbusters for the last two years. Prices were continuing to go up and up and up.”

This year, she and Ms. Nugent said, prices have remained stable as high-end homeowners wait out the coronavirus. “It’s just holding firm right now,” Ms. Totten said. “People who own here are very wealthy, so this is a second, a third, a fourth home. They’re not losing it to the bank. This is part of their portfolio and they’re just holding onto it. And they’re riding out the pandemic storm. So prices haven’t dropped.”

Still, there are more available vacation homes and condos than buyers this year — a reversal from 2019 — Ms. Totten said, owing in large part to homeowners who relied on rental income now deciding to liquidate. “With no rental income since the end of March and no end in sight,” she said, “these owners are feeling the need to sell.”

Despite the drop in closed sales, pending transactions far outmatch those from 2019, according to James Bovell, the broker and co-owner of RE/MAX Cayman Islands. “All signs indicate that the 2020 real estate market will in fact exceed its figures in 2019,” he said, adding that new developments represent another sign of confidence in the market.

Jackie Doak, the president of business development at Dart, a global investment company, whose subsidiary, Provenance Properties Cayman Islands, is the exclusive Christie’s International Real Estate affiliate, has seen a similar uptick in sales activity, noting that buyers see the islands as a refuge from the virus. “July was one of the busiest months on record for sales activity for our brokerage,” she said.

(As of Dec. 6, the Cayman Islands had reported 288 cases of Covid-19 and two deaths, according to the New York Times’s coronavirus world map. Travel to the islands remains banned for all but residents, homeowners and those with student or work visas.)

Still, Ms. Totten and Mr. Bovell said, the halt in tourism poses a challenge to the housing market, because visitors can become buyers. (About half of the homes on the islands are rented, according to the Cayman Islands Economics and Statistics Office.)

When hurricanes Maria and Irma severely damaged neighboring islands to the north in 2017, Mr. Bovell said, tourists rerouted to the Caymans. “In the last two years, the real estate market has increased by approximately 30 percent as a direct result of increased tourism,” he wrote.

Seven Mile Beach, a popular resort spot with a cluster of developments in the northwest corner of Grand Cayman, is the most coveted area. Ms. Totten said that two-bedrooms there start at $1.4 million and a three- or four-bedroom condo can start at $2.5 million and reach $14 million. Ms. Doak said the eastern side of the island, which includes East End, Rum Point and Kaibo, is quieter and less developed, with “a lovely island feel.”

Who Buys in the Cayman Islands

Mr. Bovell said his firm’s foreign and local buyers are split evenly, though on a volume basis, foreigners account for about 70 percent of the sales value. “Our foreign buyers come from primarily the United States and Canada, followed by the U.K. and other countries,” he said.

Ms. Doak said about 70 percent of buyers with her agency are foreign. Most inquiries and sales come from the U.S. and Canada, followed by Britain and Western Europe. Recently, she said, people from India, Hong Kong and Monaco have also bought properties.

There are no restrictions on foreign ownership in the Cayman Islands. Ms. Nugent said that titles are guaranteed by the government “via a modern computerized and reliable Land Registry system.”

Buyers pay a stamp duty of 7.5 percent, typically on the purchase price, she said, adding that nonresidents can get mortgages from local banks for up to 70 percent of a home’s value.

Buyers hire an attorney and notary, with fees ranging from 0.5 to 1 percent of the purchase price. Members of the Cayman Islands Real Estate Brokers Association charge commission to the seller on a sliding scale, ranging from 7 percent for properties under about $500,000 and 4 percent for properties over about $10 million, according to its website.

There are no property taxes in the Cayman Islands.