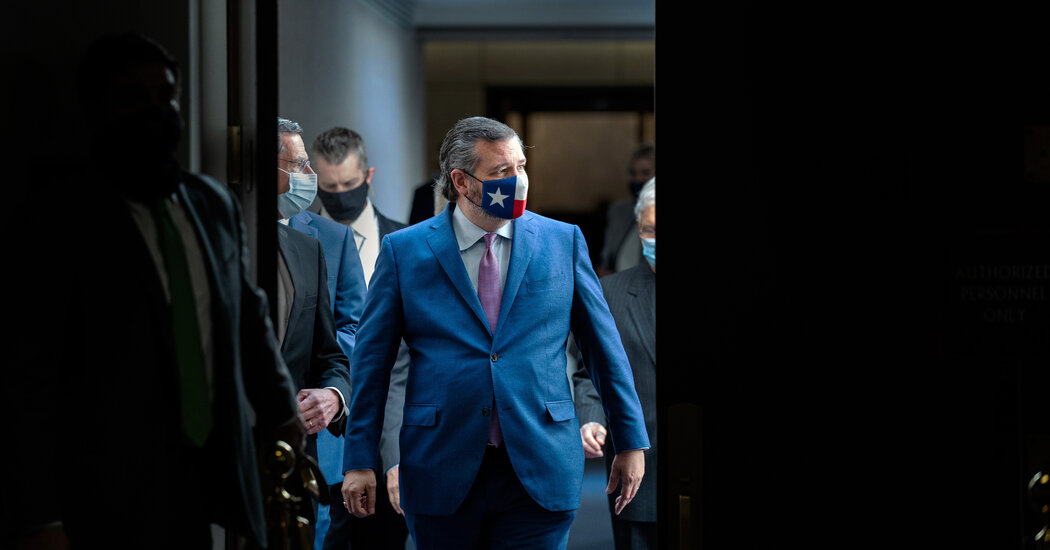 Despite dozens of judges and courts rejecting challenges to the election, Republican attorneys general in 17 states on Wednesday backed President Trump in his increasingly desperate and audacious legal campaign to reverse the results.

The show of support, in a brief filed with the Supreme Court, represented the latest attempt by Trump loyalists to use the power of public office to come to his aid as he continues to deny the reality of his loss with baseless claims of voter fraud.

The move is an effort to bolster a lawsuit filed on Tuesday by the pro-Trump attorney general in Texas that seeks to delay the certification of the presidential electors in four battleground states the president lost. Mr. Trump has been holding out hope that the Supreme Court will hear the case and ultimately award him a second term. Legal experts are skeptical, however, and have largely dismissed it as a publicity stunt.

Late Tuesday, the president asked Senator Ted Cruz of Texas, a Republican, if he would be willing to argue the case, according to a person familiar with their conversation. Mr. Cruz agreed, this person said. And the president has filed a motion with the court to intervene, which would make him a party to the case.

The willingness of so many Republican politicians to publicly involve themselves in a legal campaign to invalidate the ballots of millions of Americans shows how singular a figure Mr. Trump remains in the G.O.P. That these political allies are also elected officials whose jobs involve enforcing laws, including voting rights, underscores the extraordinary nature of the brief to the court. Even in defeat — a reality that a significant number of Republicans refuse to accept, polls show — allegiance to Mr. Trump is viewed as the ticket to higher office.

Mr. Cruz is only the latest possible Republican presidential candidate in 2024 to express support for Mr. Trump’s baseless allegations that the results of the election are tainted and fraudulent — a claim that the president’s lawyers have been unable yet to demonstrate in court. Indeed, in the president’s own motion in the Texas case his lawyer sidestepped the idea that fraud was rampant, writing that reporting in the media about the lack of proof “misses the point” because the larger issue is whether state officials loosened ballot safeguards “so that fraud becomes undetectable.”

Another Republican senator with presidential ambition, Josh Hawley of Missouri, praised the attorney general of his state on Wednesday, Eric Schmitt, after Mr. Schmitt declared on Twitter that “Missouri is in the fight” for Mr. Trump. “Good work,” Mr. Hawley wrote in response. Mr. Schmitt’s office took the lead state on the brief filed with the Supreme Court on behalf of the other 16 states on Wednesday, which argued that “serious concerns relating to election integrity and public confidence in elections” have surfaced.

Republicans familiar with the dynamics in these states — all of which Mr. Trump won — described calculations of ambition and political survival that many party officials are making as they choose to stand behind Mr. Trump. Some fear that if they don’t make it clear they are on the president’s side they could open themselves up to a primary challenge or end any hope for attaining higher office in the near future. Some like Ken Paxton, the Texas attorney general who filed the lawsuit, are considering a run for governor.

Mr. Trump has repeatedly tried to pressure Republican state legislators and elections officials — who have the most influence over declaring the formal winner and allocating electoral votes — to deny victory to President-elect Joseph R. Biden Jr. They have largely resisted him. But in a sign of how Mr. Trump continues to interfere with the process, he is hosting several Republican state attorneys generals at the White House on Thursday afternoon, according to two people familiar with the plans.

Mr. Paxton’s suit claims that voting irregularities in Georgia, Michigan, Pennsylvania and Wisconsin should be investigated by the state legislatures before those states formally certify Mr. Biden the winner on Monday.

After Mr. Paxton filed, Republican attorneys general from across the country rushed to declare themselves on board, posting their support on social media and issuing statements that echoed the legally questionable claim in the Texas brief that its citizens are harmed if elections in other states are not conducted properly.

Legal experts and a handful of Republican elected officials have questioned the seriousness of the suit, pointing out that states like Texas have no standing to bring a case involving how another state awards its electoral votes.

Senator John Cornyn, a Texas Republican and former attorney general of the state, seemed baffled by the legal maneuver, calling it “extraordinary” and “unprecedented.”

“I’ve never seen something like this, so I don’t know what the Supreme Court’s going to do,” he said in Washington on Wednesday.

And in Georgia, the office of the Republican attorney general, Chris Carr, quickly pushed back against Mr. Paxton’s lawsuit after it was filed. It issued a statement saying that Mr. Paxton was “constitutionally, legally and factually wrong about Georgia.”