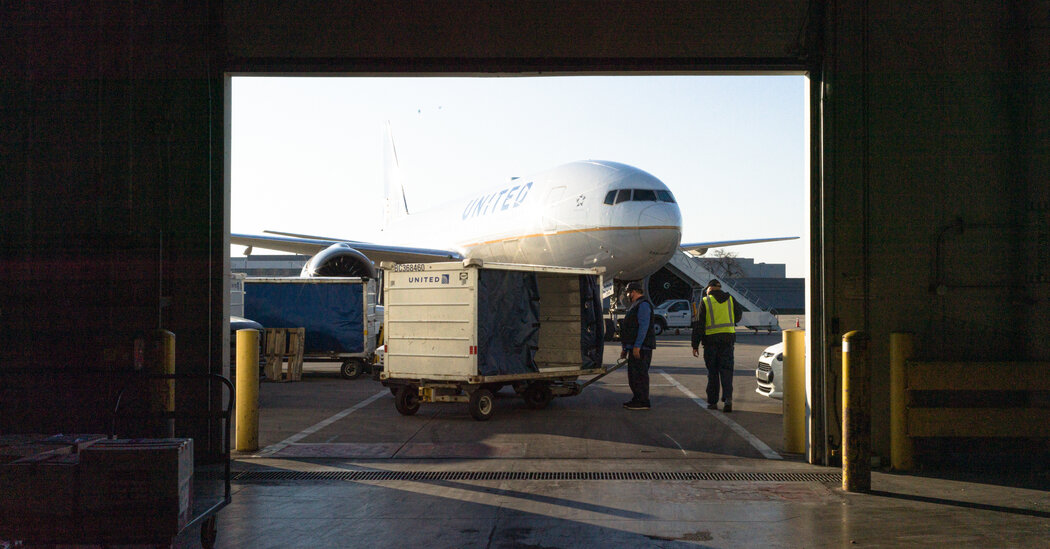 Months before anyone knew which of the coronavirus vaccine candidates would pull ahead or when they’d be available, airlines were trying to figure out how to transport doses around the world.

Over the summer, American Airlines, Delta Air Lines and United Airlines spoke with government officials, pharmaceutical companies and experts to understand where vaccines might be produced, how they would be shipped and how best to position people and planes to get them moving. More recently, they have flown batches of vaccines for use in trials and research or to prepare for wider distribution.

The industry will play a vital role in moving billions of doses aboard hundreds of flights in the months ahead, putting underused planes and crews to work while circulating the very medicine that airlines hope will get people to book tickets again. But the flights are just one segment of a global relay race in which airlines will have to be ready to move at a moment’s notice.

“When a request comes in, it’s going to be urgent and we have to act immediately,” said Manu Jacobs, who oversees shipments of pharmaceuticals and other specialty products for United.

An expert panel of the Food and Drug Administration on Thursday recommended granting emergency authorization of a vaccine developed by Pfizer and BioNTech. Another vaccine, produced by Moderna, is expected to secure approval soon. Once the agency authorizes the vaccines, shipments are expected to begin in earnest.

One of the biggest challenges for airlines has been ensuring that vaccines are transported at frigid temperatures. Pfizer’s must be stored at an incredibly low minus 94 degrees Fahrenheit. Moderna’s can be kept at a more easily managed minus 4 degrees.

For its vaccine, Pfizer designed special cooler containers that can be stuffed with dry ice, which is solid carbon dioxide. But aviation authorities limit how much dry ice can be carried on planes because it turns to gas, making the air potentially toxic for pilots and crews.

After running tests that showed it was safe, United asked the Federal Aviation Administration last month to raise the limit so it could fly the Pfizer vaccine from Brussels International Airport to Chicago O’Hare International Airport, according to an F.A.A. letter. The agency agreed, allowing the airline to carry up to 15,000 pounds of dry ice aboard a Boeing 777-224, compared with the previous limit of 3,000 pounds, according to the letter. A single 777 can carry up to one million doses, the airline said.

American and Delta are also working with the agency to increase dry ice limits for vaccine shipment. And Boeing said it had been working closely with passenger and cargo carriers and global regulators to help safely transport as much of the vaccines as possible. In service letters, online symposiums and calls, the airplane manufacturer has shared its own findings on dry ice emission rates and important safety procedures. Boeing also said it was working with other aerospace companies on guidance they could provide to airlines.

United declined to comment on its work with Pfizer, but said it had been laying the groundwork to ship vaccines since the summer, an effort that involved marshaling teams from across the company and the world.

“We decided very quickly that we needed to bring some bright people together to think about how to prepare,” Mr. Jacobs said.

The scale and urgency of circulating the coronavirus vaccine are unlike anything airlines and other logistics companies had seen before. UPS has been installing ultralow-temperature freezer farms — able to keep goods as cold as minus 112 degrees Fahrenheit — near its air cargo hubs in the United States and Europe. The company’s health care arm has also increased production of dry ice, with U.S. facilities able to make as much as 1,200 pounds an hour. FedEx has added ultracold freezers throughout its U.S. network, too. And both companies have enormous fleets of cargo planes that will help ferry the vaccines.

In normal times, about half of all air cargo is transported by airlines, often beneath the feet of passengers. The steep decline in flights this spring removed much of that capacity, but the urgent need for masks, gloves and ventilators created a big opportunity for cash-starved carriers, allowing them to recapture at least some of that lost business. Many airlines, including United, American, Lufthansa and Virgin Atlantic, began running flights only to haul cargo, and some have gone so far as to belt boxes and goods into the seats where passengers normally sit.

Now, airlines are preparing to run vaccine-only flights: planes that are chock-full of freezer boxes or coolers, with a skeleton crew.

In mid-November, American Airlines conducted a series of trial flights from Miami to South America to put thermal packaging and its own handling procedures to the test. It has also already transported shipments for vaccine trials around the world. Other preparations, though critical, are more mundane. Those include lining up the certifications and authorizations to transport the goods, ensuring that handoffs of the vaccine will be perfectly timed, and making sure that the planes needed are in the right place at the right time.

As the coronavirus vaccine get closer to U.S. authorization, here are some questions you may be wondering about:

“We believe it’s going to take every single player in this industry — not just the airline industry, but really the supply-chain logistics industry — to pull this off,” said Jessica Tyler, president of cargo for American Airlines.

Airlines have experience transporting the flu vaccine, and the industry has pursued more pharmaceutical business in recent years. In 2015, for example, American built a 25,000-square foot warehouse at its Philadelphia International Airport hub dedicated to cold storage of pharmaceuticals. That warehouse, which is monitored around the clock, can store shipments as low as minus 4 degrees Fahrenheit, and is the largest of a handful of such facilities that the airline operates at a half-dozen airports in the United States and Europe. Delta and United operate similar cold storage networks.

When it comes to cargo, airlines typically work with “freight forwarders,” middlemen who organize shipping on behalf of clients like pharmaceutical manufacturers and distributors. With the vaccine, carriers expect to work directly with those customers in some cases, because of the urgency of getting the vaccine to where it is needed.

American and Delta are working with McKesson, a major medical supplier, which the Centers for Disease Control and Prevention this summer assigned to serve as a sort of centralized distributor for coronavirus vaccines. Each major vaccine manufacturer, except for Pfizer, has said it will use McKesson to distribute its product within the United States, according to Rob Walpole, vice president of Delta Cargo.

Since August, Delta has ferried vaccine trial shipments, test kits and other products both within the United States and from Belgium and Latin America into America, Mr. Walpole said on a call with reporters this month. The airline has also created a dedicated “vaccine control tower” to track and coordinate shipments.

While the influx of dry ice has posed a challenge for airlines, so has the speed with which the vaccines have arrived, he said.

“Like many things this year, there’s kind of an unprecedented intensity and amount of change that’s happened in the last two months,” Mr. Walpole said. “That’s tested everyone that’s associated with this.”