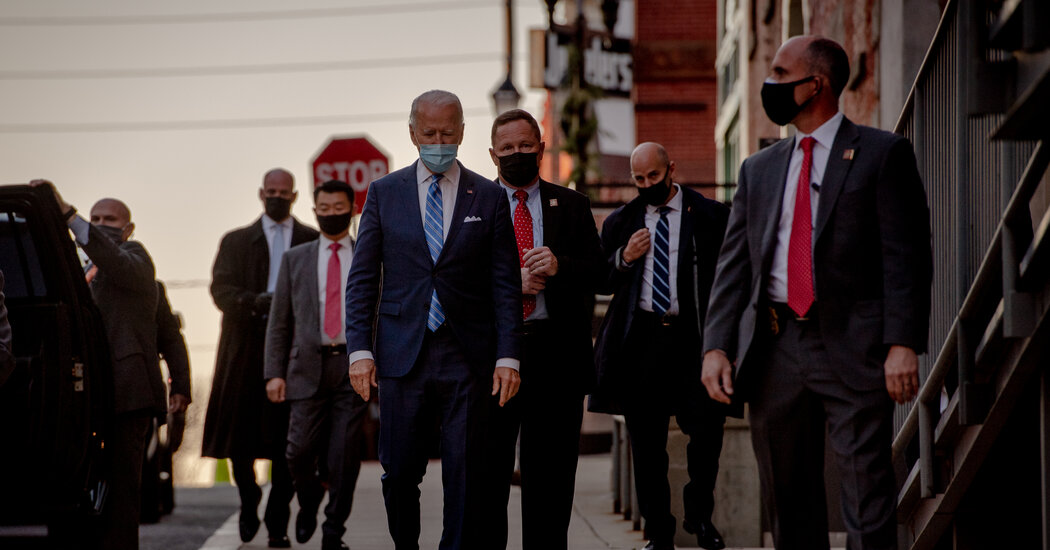 WASHINGTON — The newly disclosed federal tax investigation into his son will test President-elect Joseph R. Biden Jr.’s stated commitment to independent law enforcement while leaving him in a no-win situation that could prove distracting at best and politically and legally perilous at worst.

Unless President Trump’s Justice Department clears Hunter Biden of wrongdoing before leaving office, the new president will confront the prospect of his own newly installed administration deciding how or whether to proceed with an inquiry that could expose his son to criminal prosecution. Already some Republicans are demanding a special counsel be appointed to insulate the case from political influence.

On the campaign trail, Mr. Biden excoriated Mr. Trump’s efforts to use the F.B.I. and Justice Department to go after his enemies and go easy on his friends, vowing to restore a measure of autonomy for law enforcement if he won the election. News of the investigation into Hunter Biden now focuses even more attention on the incoming president’s choice for attorney general, and it will inevitably raise questions if he appoints someone perceived as a political ally rather than someone seen as more independent of the White House.

“That should not be investigated by someone appointed by the president any more than if one of his cabinet members is accused of something or his national security adviser,” said Richard W. Painter, a former ethics counsel to President George W. Bush who became a leading critic of Mr. Trump and switched parties.

Mr. Painter said Mr. Biden should establish a permanent special counsel to handle politically sensitive cases and restore faith that the Justice Department is not simply a tool of the president. “This is the opportunity for the incoming president and attorney general, whoever he chooses, to say this is exactly why we need an office of special counsel,” he said.

The president-elect has made no comment since Hunter Biden disclosed on Wednesday that he had been informed about the investigation being conducted by the U.S. attorney in Delaware beyond a statement issued by his staff expressing support for his son. His office had no further comment on Thursday on how he would handle the matter once he becomes president.

“I’m not going to turn a blind eye on this,” Senator Ron Johnson, Republican of Wisconsin and the chairman of a Senate committee that issued a report criticizing Hunter Biden before the election, told Fox News on Wednesday. “We’ll keep digging.”

Senator Charles E. Grassley, Republican of Iowa and the chairman of the Senate Finance Committee, claimed vindication for his own investigation of Hunter Biden’s business deals, saying many Democrats and news organizations had ignored him.

“Some even baselessly said it was foreign disinfo,” he wrote on Twitter. “Now those same orgs report IRS/FBI subpoenaing Hunter Biden in tax fraud probe over his China ties.”

But it is not clear whether the newly disclosed federal investigation has substantiated the Republican claims. The inquiry originally focused on possible money laundering but did not gather enough evidence for a prosecution, according to people close to the case. Instead, it turned to tax matters. The federal government and the city of Washington, D.C., issued liens against Hunter Biden for unpaid taxes but have since released them.

But the matter now appears likely to hang over Mr. Biden even as he takes office.

If he refuses to appoint a special counsel and his Justice Department opts not to prosecute his son, many will invariably suspect favoritism. If it does prosecute, then the president will face the prospect of seeing his own son threatened with criminal prosecution.

For presidents, few aspects of life in the White House are more upsetting than allegations against family; either they feel let down by a relative or feel that a loved one was unfairly targeted only because of the relationship. President Jimmy Carter’s brother, Billy Carter, was investigated for lobbying for the government of Libya while President George Bush’s son Neil Bush was faulted by regulators in connection with the collapse of a savings and loan. President Bill Clinton ultimately pardoned his own brother, Roger Clinton, for drug charges.

Mr. Trump’s children have been caught up in multiple legal matters during his presidency. The special counsel Robert S. Mueller III examined a meeting that Donald Trump Jr. held with a Kremlin-connected lawyer during the 2016 campaign, while Jared Kushner, his son-in-law and senior adviser, was stripped of his top-secret security clearance over questions about his business dealings.

Just last week, Ivanka Trump testified in a lawsuit brought by the attorney general of the city of Washington about inauguration finances. New York prosecutors are looking at tax write-offs of consulting fees that apparently went to her before her father won the presidency.

Even if Hunter Biden is ultimately not found to have violated any laws, the investigation could be problematic for a new president promising a clean break from the many conflicts of interest under his predecessor. Billy Carter, who like Hunter Biden experienced substance abuse problems, underwent four investigations and was the subject of a 92-page report by his own brother’s White House that criticized his judgment, but no criminal wrongdoing was found.

“If Carter’s experience is any indication, the Hunter Biden case will fester for months and distract the administration,” said Jonathan Alter, the author of “His Very Best,” a new biography of Jimmy Carter. “But there’s an important difference: The hard-charging post-Watergate press suspected the president might have done something wrong and hounded him for it. In this case, Joe Biden has been poked and probed for months and not implicated, which gives him more of a presumption of innocence than Carter had.”

But that may not relieve Mr. Biden of the white-hot glare of Republican investigators and conservative news media, which have been eager to prove corruption by Hunter Biden in part to justify Mr. Trump’s effort to pressure the government of Ukraine to investigate him, an effort that ultimately led to his impeachment by the Democratic-controlled House for abuse of power.

“Republicans in the 1970s were not vicious and heedless of the facts, and when Carter defended himself well at the press conference, they backed off the story,” Mr. Alter said. “That is unlikely to happen this time.”

Democrats were instantly wary of the tax inquiry into Hunter Biden, deeming it partisan. “All the allegations we explored about Hunter in impeachment turned out to be unfounded,” said Norman L. Eisen, who served as counsel to House Judiciary Committee Democrats during the impeachment battle. “They were nothing burgers. There’s ample reason to believe that the Trump-Barr D.O.J. is not above yet another abuse of power, a parting abuse of power.”

Mr. Trump made clear that he believed the Justice Department and the F.B.I. should initiate or call off investigations according to his own wishes. He repeatedly pressured them to investigate Mr. Biden, former President Barack Obama, former Secretary of State Hillary Clinton and other perceived adversaries, only to be frustrated when Attorney General William P. Barr did not comply.

But under pressure from Mr. Trump, Mr. Barr did move to reduce the sentencing recommendation for the president’s longtime friend and adviser Roger J. Stone Jr., and to overturn the guilty pleas of the president’s former national security adviser Michael T. Flynn, over the objections of career prosecutors, some of whom resigned or withdrew in protest. Mr. Trump ultimately went further by commuting Mr. Stone’s sentence and pardoning Mr. Flynn.

Noah Bookbinder, the executive director of Citizens for Responsibility and Ethics in Washington, said it had always been important for an attorney general to demonstrate independence from the White House on individual investigations.

“The conduct of President Trump and Attorney General Barr over the past several years has made that need even more apparent, and this latest issue reinforces it,” he said. Yet he did not endorse a special counsel yet in the Biden case. “I don’t think we know enough about the status and nature of the investigation into Hunter Biden to know whether a special counsel is appropriate.”