F.D.A. Clears Pfizer Vaccine, and Millions of Doses Will Be Shipped Right Away 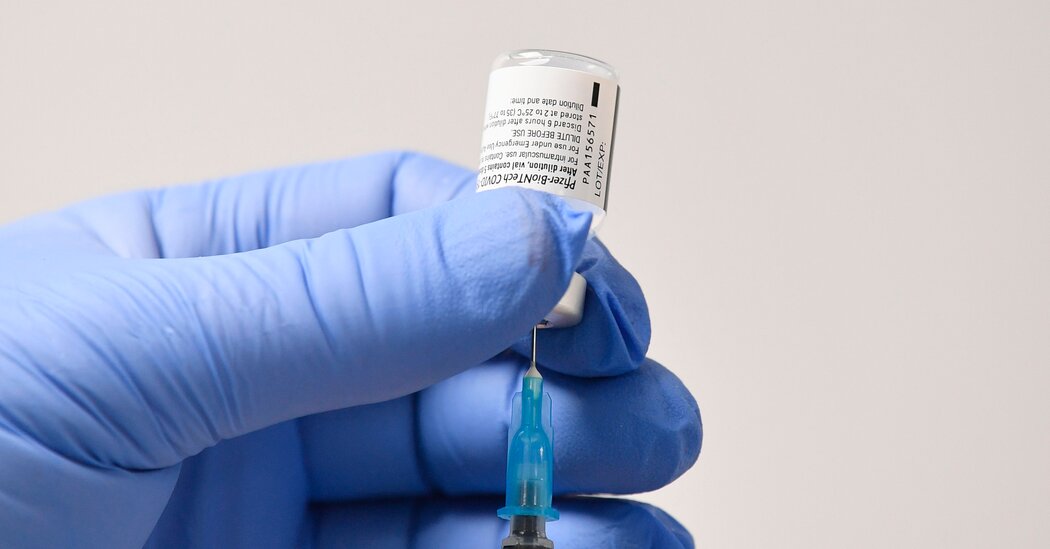 The Food and Drug Administration authorized Pfizer’s Covid-19 vaccine for emergency use on Friday, clearing the way for millions of highly vulnerable people to begin receiving the vaccine within days.

according to three people with knowledge of the decision who spoke on condition of anonymity because they were not authorized to discuss it.

The authorization is a historic turning point in a pandemic that has taken more than 290,000 lives in the United States. With the decision, the United States becomes the sixth country — in addition to Britain, Bahrain, Canada, Saudi Arabia and Mexico — to clear the vaccine. Other authorizations, including by the European Union, are expected within weeks.

The action followed an extraordinary sequence of events on Friday morning when the White House chief of staff, Mark Meadows, told the F.D.A. commissioner, Dr. Stephen Hahn, to consider looking for his next job if he didn’t get the emergency approval done on Friday, according to a senior administration official who spoke on condition of anonymity because he was not authorized to discuss the matter. Dr. Hahn then ordered vaccine regulators at the agency to do it by the end of the day.

The authorization set off a complicated coordination effort from Pfizer, private shipping companies, state and local health officials, the military, hospitals and pharmacy chains to get the first week’s batch of about three million doses to health care workers and nursing home residents as quickly as possible, all while keeping the vaccine at ultracold temperatures.

Pfizer has a deal with the U.S. government to supply 100 million doses of the vaccine by next March. Under that agreement, the shots will be free to the public.

Every state, along with six major cities, has submitted to the federal government a list of locations — mostly hospitals — where the Pfizer vaccine is to ship initially. In populous Florida, the first recipients will be five hospitals, in Jacksonville, Miami, Orlando, Tampa and Hollywood. In tiny, rural Vermont, only the University of Vermont Medical Center and a state warehouse will get supplies.

McKesson Corporation, a giant medical supplier, is sending kits of syringes, alcohol pads, face shields and other supplies to the same sites, where they will meet up with the vaccines that Pfizer is shipping in special boxes, packed with dry ice, designed to keep them at minus 94 degrees Fahrenheit.

The Pfizer packaging will include a device that tracks the location of the box, plus a thermal probe that will make sure the deep freeze is maintained throughout the journey from the company’s distribution sites in Michigan and Wisconsin.

The decision is a victory for Pfizer and its German partner BioNTech, which began working on the vaccine 11 months ago. Vaccines typically take years to develop. The companies’ late-stage clinical trial, which enrolled nearly 44,000 people, was found to be 95 percent effective.

An expert panel advising the F.D.A. on Thursday gave its approval of Pfizer’s vaccine for people 16 and older, and the agency was planning to release the formal authorization on Saturday. That timeline was accelerated by half a day after President Trump attacked Dr. Hahn for failing to authorize a vaccine more quickly. But the accelerated announcement was not expected to speed up the delivery of vaccines around the country.

Mr. Trump has repeatedly accused the F.D.A. and the drugmakers themselves of slow-walking the approval process in order to harm him politically. Allies of Dr. Hahn have been on tenterhooks for weeks, expecting him to be fired any day.

The president wrote that with “my pushing,” the administration had shaved years off the development of vaccines. “Get the dam vaccines out NOW, Dr. Hahn,” he wrote, misspelling the expletive.

The threat to Dr. Hahn’s job was first reported by The Washington Post. In a statement, Dr. Hahn denied that Mr. Meadows told him he should consider seeking another job, calling it “an untrue representation of the phone call.” Instead, Dr. Hahn said, his agency was “encouraged to continue working expeditiously.”

Even though the F.D.A. was going to approve the Pfizer vaccine in any case, some experts warned that the pressure from the White House could undermine public trust in the agency’s decision-making.

“This may actually do more harm than good, because all it will do is inject more politics into a scientific process,” said Dr. Aaron S. Kesselheim, a professor at the Brigham and Women’s Hospital and Harvard Medical School.

A similar vaccine, developed by Moderna, is also under review by the F.D.A. and could soon be cleared for emergency use. On Friday, the federal government announced it had ordered another 100 million doses from Moderna, adding to a deal this summer for an initial supply of 100 million doses. Other vaccines, including ones developed by Johnson & Johnson and AstraZeneca, are in late-stage trials and could be authorized in the next few months.

In anticipation of the vaccine arriving across the country, Americans expressed both hope and anxiety.

Dr. Samu Queen, a physician in Portland, Ore., said her geriatric patients are especially eager to receive the vaccine. “They are all very anxious,” she said. “Pretty much everyone, at every appointment, is ready to get it.”

As the coronavirus vaccine get closer to U.S. authorization, here are some questions you may be wondering about:

Dr. Queen said she was watching closely to see how initial subjects in Britain were responding. She described herself as “somewhat apprehensive about how safe it is, versus not.”

Joshua Ball, the associate executive director of Shaping Our Appalachian Region, an economic development group in eastern Kentucky, has been a primary caretaker for his father, who had a stroke earlier this year and has other health issues. During the pandemic, he has had to try and help remotely as much as possible.

A vaccine could change that. It could also allow him to go back to church, and to attend the seasonal festivals that are cultural staples for many small towns in his region.

“I miss the fellowship of shaking hands, and seeing people, and celebrating birthdays and church meals and vacation bible school,” he said.

Still, state health officials remain deeply concerned about what they describe as insufficient funding for the biggest immunization campaign the country has ever embarked on. State health officials have asked Congress for at least $8.4 billion to do the job well. But so far, they have received only about $350 million from the Centers for Disease Control and Prevention for vaccine distribution and administration tasks. Those tasks include expanding online systems to track and share information about who has been vaccinated; recruiting and training doctors, nurses and pharmacists to administer the shots; and convincing the public of the importance of getting immunized.

Supplying enough of the vaccine has also proven to be a challenge without a clear resolution. Pfizer had to scale back earlier estimates because of manufacturing setbacks, and has said it will be able to supply up to 25 million doses before the end of the year, and 100 million total vaccines by March.

This week, federal officials said that rather than using all 6.4 million doses that the government initially ordered from Pfizer to vaccinate people, it is holding back half of the supply for a booster shot to recipients three weeks after their first vaccination. But even though only about three million people will receive a vaccine in the first week, officials have held firm on their estimate that, between the Pfizer and Moderna vaccines, which each require two shots, they hope to give at least 20 million people their first dose of a vaccine by the end of the year.

Questions also persist about how quickly a vaccine will be available to anyone that wants one. Federal officials have said they expect to be able to vaccinate the bulk of the U.S. population by the middle of next year, but recent setbacks have challenged those estimates. Pfizer has told the federal government that it may not be able to provide an additional 100 million doses to the United States before the middle of next year because of agreements it has with other countries. And three other experimental vaccines, developed by Novavax, Sanofi and AstraZeneca, have faced delays in their clinical trials.

A new study confirms what many of...
Read more
Previous articleAirlines Gear Up to Transport Vaccines That Could Revive Travel
Next articleHyundai to take over robot-maker Boston Dynamics