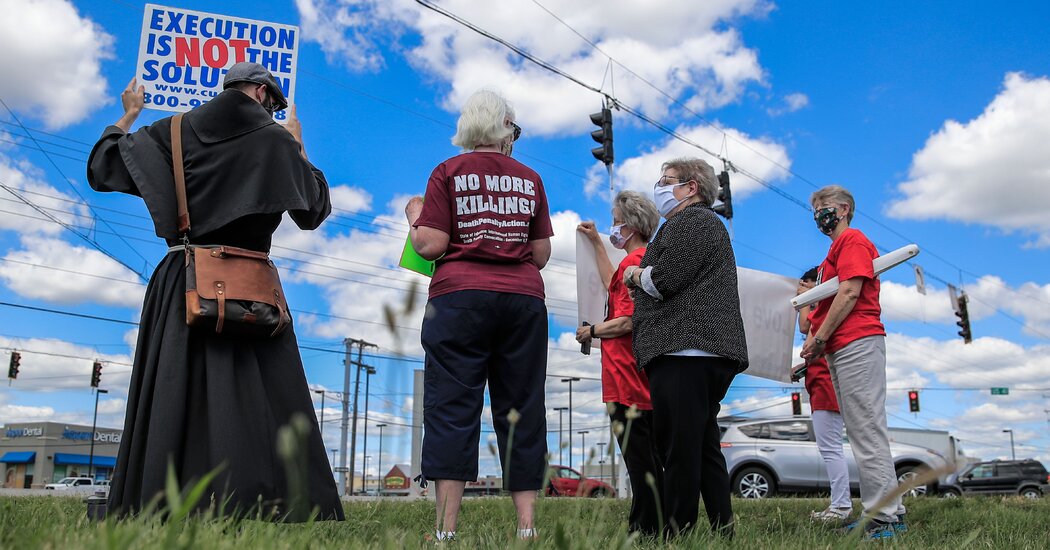 WASHINGTON — The Justice Department on Friday executed Alfred Bourgeois, a 56-year-old inmate sentenced to death for murdering his 2-year-old daughter in 2002.

Mr. Bourgeois’s execution was the 10th carried out by the Trump administration since the federal government resumed its use of capital punishment in July after a 17-year hiatus. The last scheduled by the Trump administration for 2020, Mr. Bourgeois’s execution adds to what became the deadliest year in the history of federal capital punishment since at least the 1920s.

Mr. Bourgeois was declared dead at 8:21 p.m. at the federal penitentiary in Terre Haute, Ind., according to the Bureau of Prisons.

On Thursday, the federal government executed Brandon Bernard, despite a high-profile campaign for leniency that included Kim Kardashian West and two lawyers who helped defend President Trump during his impeachment. Mr. Trump’s administration has executed three people since Election Day, the only federal executions during the lame-duck period before a new presidential administration in at least 90 years.

The Justice Department said Mr. Bourgeois, once a truck driver living in Louisiana, tortured and beat to death his young daughter. After a paternity test established him as the father and a court ordered that he pay child support, Mr. Bourgeois temporarily assumed custody of his daughter, according to court filings.

When the child tipped over her potty chair in Mr. Bourgeois’s truck, he attacked the young girl, and she died the next day, the Justice Department said. After the jury heard evidence of his violence toward others, Mr. Bourgeois was sentenced to death in 2004 for the killing, which was a federal offense because it occurred at the Corpus Christi Naval Air Station.

In his final words, Mr. Bourgeois did not apologize, according to a report from a journalist in attendance. Rather, he asserted that he did not kill his daughter.

“I ask God to forgive all those who plotted and schemed against me, and planted false evidence,” he said, adding “I did not commit this crime.”

As the lethal injection began, Mr. Bourgeois gave a thumbs-up to his spiritual adviser, standing in a corner of the death chamber, the report said. Within minutes, his body was still.

In a statement, the victim’s family said they could now begin the process of healing, but justice should not have taken 18 years.

The department had scheduled Mr. Bourgeois’s execution for last January but the previous month the Supreme Court let stand a lower court order that blocked it. A federal judge in Indiana also issued a stay in his case in March, after his defense claimed that Mr. Bourgeois was intellectually disabled and ineligible for the death penalty. Another court vacated that stay in October.

The Federal Death Penalty Act bars the government from executing a mentally disabled inmate under the law, and the Supreme Court ruled in 2002 that mentally disabled criminals could not be put to death. His lawyers claimed that Mr. Bourgeois received IQ scores low enough to constitute evidence of deficits in intellectual functioning and underwent other assessments that they said helped show he should be exempt from capital punishment.

But like other inmates executed by the federal government this year, Mr. Bourgeois had no success with his final plea to delay his execution. The Supreme Court denied Mr. Bourgeois’s application for a stay on Friday, with Justices Sonia Sotomayor and Justice Elena Kagan dissenting. Joined by Justice Kagan, Justice Sotomayor wrote that the court should resolve the legal issue in his case that is likely to recur before sanctioning Mr. Bourgeois’s execution.

Victor J. Abreu, a lawyer for Mr. Bourgeois, maintained that the government killed his client without fair consideration and “in spite of clear directives from the U.S. Supreme Court and federal laws that prohibited” his execution.

Another bid for reprieve in Mr. Bourgeois’s final days was also unsuccessful. In a 5-to-4 decision from the Court of Appeals for the District of Columbia, the judges also declined to issue a stay in a challenge to the federal execution protocol.

The Federal Death Penalty Act requires executions to be carried out “in the manner prescribed by the law of the state in which the sentence is imposed.” Death row inmates have challenged the federal execution protocol with arguments about whether the law requires the federal government to follow details in the protocols required by the states.

After the appeals court denied the inmates’ request in this case on Thursday, Mr. Bourgeois’s legal team declined to appeal the decision to the Supreme Court. Shawn Nolan, his lawyer, said the court has recently been unreceptive to litigation over the method of execution.

The next federal death row prisoner scheduled to die is Lisa M. Montgomery, the only woman on federal death row. Her execution is scheduled for Jan. 12. The Trump administration intends to put three inmates to death next month before President-elect Joseph R. Biden Jr. takes office. Mr. Biden has said he will work to end the federal death penalty.

Trump Asked Aide Why His Generals Couldn’t Be Like Hitler’s, Book Says