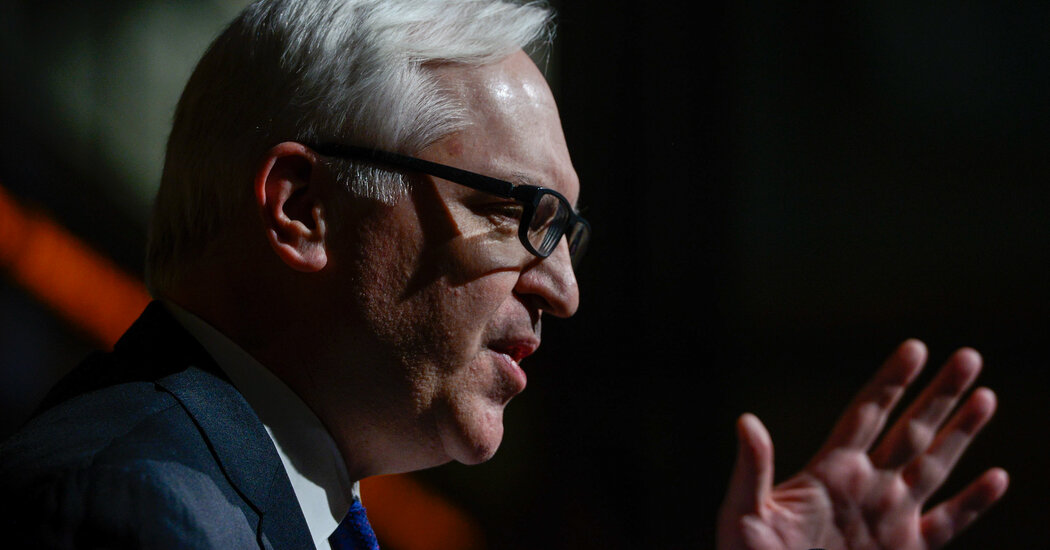 The editorial page editor of The Wall Street Journal accused strategists for President-elect Joseph R. Biden Jr. of instigating a coordinated response to an op-ed article published Friday evening that called on Jill Biden, Mr. Biden’s wife, to refrain from referring to herself as “Dr. Biden” because she is not a medical doctor, but rather holds a doctorate in education.

After earning two master’s degrees, Dr. Biden received her doctorate in 2007 from the University of Delaware. She also taught English at a community college in Virginia, and has said she hopes to continue doing so while serving as first lady.

“The Ph.D. may once have held prestige, but that has been diminished by the erosion of seriousness and the relaxation of standards in university education generally,” Joseph Epstein wrote in the op-ed item.

In the response, published Sunday evening and for Monday’s newspaper, Paul A. Gigot, the top editor for The Journal’s opinion section for nearly two decades, pointed to negative notes about Mr. Epstein’s article posted to Twitter by two Biden staff members as well as Douglas Emhoff, the husband of Senator Kamala Harris, the vice president-elect, as evidence of a campaign.

“Why go to such lengths to highlight a single op-ed on a relatively minor issue?” wrote Mr. Gigot, who elsewhere said the responses reflected “what was clearly a political strategy.” “My guess is that the Biden team concluded it was a chance to use the big gun of identity politics to send a message to critics as it prepares to take power. There’s nothing like playing the race or gender card to stifle criticism.”

Mr. Gigot further said the press had generally backed the negative interpretation of the article (he referred to a New York Times article about it). And he defended the piece.

“Mrs. Biden is now America’s most prominent doctorate holder and is taking a leading role in education policy,” Mr. Gigot wrote. “She can’t be off-limits for commentary.”

He also noted that Mr. Epstein’s argument that holders of doctorates should not use the “Dr.” honorific applied to men as well as women, and he said criticizing Mr. Epstein’s use of “kiddo” to refer to Dr. Biden was misplaced, since Mr. Biden has also used the term in reference to his wife. He compared the Biden staff members’ tweets to those in which President Trump has referred to the press as the “enemy of the people.”

The Journal opinion page’s conservatism — which predates Rupert Murdoch’s buying The Journal’s parent company, Dow Jones & Company, for $5 billion in 2007 — has occasionally produced friction with The Journal’s newsroom, which like most newspapers’ is not officially political.

Mr. Epstein’s piece is likely to produce further tensions. For instance, over the weekend, a higher education reporter for The Journal said on Twitter that such opinion articles “make it harder for me to do my job.”

As at other newspapers, including The Times and The Washington Post, The Journal’s news sections and opinion pages are administered separately, each overseen by a top editor who reports to the newspaper’s publisher.

In July, nearly 300 news employees sent a letter to The Journal’s publisher, Almar Latour, identifying a “lack of fact-checking and transparency” on the opinion desk. The letter referred to several op-ed pieces, including Vice President Mike Pence’s June 16 essay that was headlined “There Isn’t a Coronavirus ‘Second Wave.’” In response, The Journal published an unsigned editorial bemoaning the “progressive cancel culture” it said the letter typified.

In June, the board of the union that represents Journal staff members sent a letter to Mr. Latour and Matt Murray — The Journal’s editor in chief, overseeing the news section — asking that Gerard A. Baker, the previous editor in chief and now an editor at large, be reassigned to the opinion section, and criticized an op-ed article of his as well as several of his Twitter posts. He was reassigned the day after the letter was sent, though a Journal spokeswoman said that move had been in the works.

In February, the headline of an article by the columnist Walter Russell Mead criticizing China’s response to the coronavirus prompted more than 50 news employees, many based in China, to sign a letter to the Dow Jones chief executive and the chief executive of Mr. Murdoch’s News Corp. asking for a retraction. The headline, which referred to China as the “Real Sick Man of Asia,” was “derogatory,” the letter said. The headline was not retracted, and the Chinese government soon expelled three Journal reporters in what it said was retaliation.

In Sunday’s response, Mr. Gigot pledged not to be fazed by the reaction to the op-ed article. “If you disagree with Mr. Epstein, fair enough. Write a letter or shout your objections on Twitter,” he wrote. “But these pages aren’t going to stop publishing provocative essays merely because they offend the new administration or the political censors in the media and academe.”