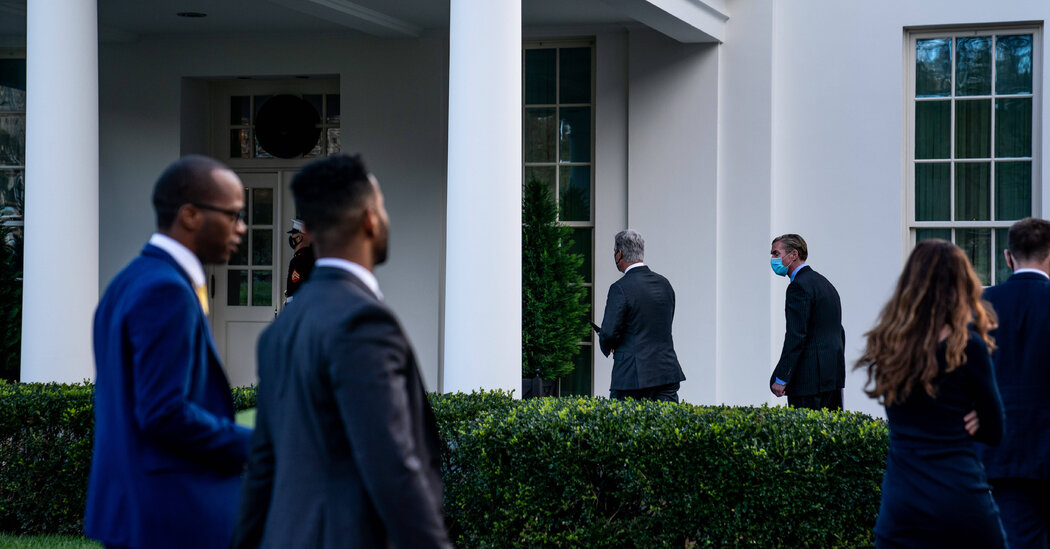 White House staff members who work in close quarters with President Trump have been told that they are scheduled to receive injections of the coronavirus vaccine soon, at a time when the first doses are being distributed only to high-risk health care workers, according to two sources familiar with the distribution plans.

The goal of distributing the vaccine in the West Wing is to prevent additional government officials from falling ill in the final weeks of the Trump administration. The hope is to eventually distribute the vaccine to everyone who works in the White House, but the effort will begin with some of the most senior people who work around the president, one of the people said.

It is not clear how many doses are being allocated to the White House or how many are needed, since many staff members have already tested positive for the virus and recovered. While many Trump officials said they were eager to receive the vaccine and would take it if it were offered, others said they were concerned it would send the wrong message by making it appear as if Trump staff members were hopping the line to protect a president who has already recovered from the virus and bragged that he is now “immune.”

The first doses of the Pfizer-BioNTech vaccine left a facility in Michigan early Sunday, with UPS and FedEx teaming up to ship doses to all 50 states for distribution.

“Senior officials across all three branches of government will receive vaccinations pursuant to continuity of government protocols established in executive policy,” John Ullyot, a spokesman for the National Security Council, said in a statement. “The American people should have confidence that they are receiving the same safe and effective vaccine as senior officials of the United States government.”

He would not say whether White House officials who had already recovered would still receive the vaccine, or whether Mr. Trump himself would get one.

The picture was murkier on Capitol Hill, where lawmakers have struggled for months to balance the need to carry on with legislative business despite fluctuating numbers of coronavirus cases in its own ranks. A congressional aide said on Sunday evening that leaders on Capitol Hill had not yet been told how many doses would initially be available for lawmakers. Dr. Brian P. Monahan, the attending physician of Congress, has overseen the coronavirus response inside the Capitol complex, but he has yet to make public any plans for vaccine distribution there.

A transition official said President-elect Joseph R. Biden Jr. planned to consult with Dr. Anthony S. Fauci, the nation’s top infectious disease expert, and take the vaccine publicly when Dr. Fauci recommended he do so. Mr. Biden said in a recent CNN interview that he wanted to serve as an example. “It’s important to communicate to the American people it’s safe; it’s safe to do this,” Mr. Biden said.

But after months during which Mr. Trump and his senior advisers played down the virus, hosting campaign rallies and holiday parties where face masks were encouraged but never required, the news of White House officials suddenly taking the virus seriously enough to claim early doses of a vaccine was greeted by outrage from Democrats as well as the president’s longtime critics.

George T. Conway III, a prominent conservative lawyer and a vocal critic of Mr. Trump, noted that because the vaccine required a second dose 21 to 28 days after the first injection, there was little public benefit for White House staff members to receive them. The president has only 37 days left in office.

“If they were truly interested in protecting staffers,” Mr. Conway wrote on Twitter, “they would have been better off not holding super spreader events.”

Tim Hogan, a Democratic consultant and a former top aide to Senator Amy Klobuchar’s presidential campaign, said that Washington “will not come close to covering every health care worker with its first allotment of the vaccine, but a White House that downplayed the virus and held a half-year nationwide super spreader tour gets to cut the line.”

He called the White House vaccinations “a final middle finger to the nurses and doctors on the front lines from the Trump administration.”

A senior administration official said that vaccinating officials was necessary for “providing visible leadership to the nation and the world, and maintaining the trust and confidence of the American people.” The official added that vaccinating West Wing officials would help to “continue essential operations, without interruption” to help continue to fight the pandemic nationwide.

There have been multiple outbreaks of the coronavirus at the White House in recent months. Mr. Trump, the first lady and a half-dozen advisers tested positive at the end of September and in early October. Dr. Fauci later called a Rose Garden ceremony to announce Mr. Trump’s choice of Judge Amy Coney Barrett for the Supreme Court a “super spreader event.”

And a third wave hit the West Wing after the president’s election night party at the White House, where supporters gathered indoors and did not wear masks. Mark Meadows, the White House chief of staff, got sick around that time, as did a number of other Trump advisers.