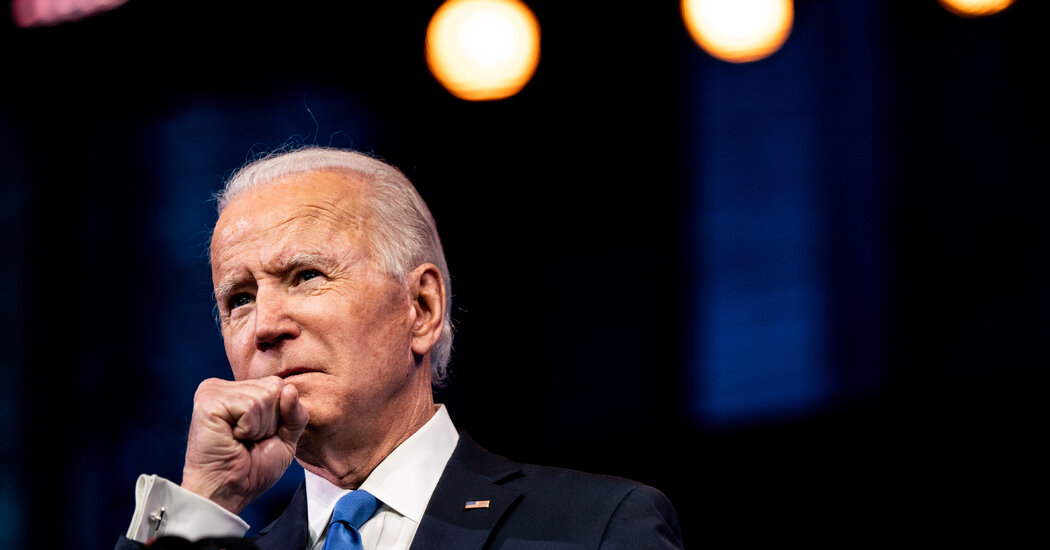 WASHINGTON — President-elect Joseph R. Biden Jr.’s allies have begun an ambitious campaign to raise millions of dollars from corporations and individuals by offering special “V.I.P. participation” in reimagined inaugural festivities that will be largely virtual because of the coronavirus pandemic.

Far fewer tickets than normal are being distributed for people to attend the actual swearing-in ceremony outside the Capitol on Jan. 20, which is organized and funded by the government.

To create an air of celebration, Mr. Biden’s inaugural committee said it was raising private funds to pay for virtual events that will echo the Democratic convention this year, which featured a 50-state roll call from spots around the nation. There are also plans for a “virtual concert” with major performers whose names have not yet been released — and possibly for an in-person event later in the year.

The contrast between the constraints of putting on inaugural festivities in the midst of a public health crisis and fund-raising as usual underscores how donations to an inaugural are not just about getting good seats for the swearing-in or tickets to the glitziest black-tie balls. They are also a way for corporations and well-heeled individuals to curry favor with a new administration, a reality that prompted liberal groups on Wednesday to ask Mr. Biden’s inaugural committee to forgo corporate donations.

President Trump’s inauguration nearly four years ago took the practice to a new level. It became an access-peddling bazaar of sorts, and aspects of its record fund-raising and spending emerged as the subjects of investigations.

Mr. Biden’s inaugural committee is promising corporations that give up to $1 million and individuals who contribute $500,000 — the largest amounts the committee said it would accept — some form of “V.I.P. participation” in the virtual concert.

This special access is among the perks detailed on a one-page sponsorship menu from the committee that circulated among donors on Wednesday. Perks include “event sponsorship opportunities,” as well as access to virtual briefings with leaders of the inaugural committee and campaign, and invitations to virtual events with Mr. Biden and Jill Biden, the future first lady, and Vice President-elect Kamala Harris and her husband, Doug Emhoff.

Top donors will also get a fitting memento for the coronavirus era — “virtual signed photos” with the president-elect and the first lady, as well as Ms. Harris and her husband, replacing the traditional in-person rope-line photo opportunities for which donors usually pay handsomely at fund-raisers and other political events.

Incoming presidents have long raised private funds to organize and pay for inaugural festivities beyond the swearing-in ceremony, which is hosted by the Joint Congressional Committee on Inaugural Ceremonies and funded with taxpayer money.

Top donors typically get intimate in-person access at parties and dinners to celebrate with members of an incoming president’s campaign and administration.

Among the corporate giants who have indicated they are ready to donate despite the lack of in-person events is Boeing, the aerospace manufacturer and military contractor. The company is contributing $1 million to Mr. Biden’s inauguration, an amount it said is consistent with its past contributions to inaugural committees. Representatives from Bank of America and Ford Motor Company also said their companies intended to donate.

“We have supported inauguration events over many administrations on a nonpartisan basis because we view it as part of our civic commitment for an important national event,” Bill Halldin, a spokesman for Bank of America, said in a statement. “The private sector has traditionally done so and we expect to provide support for ceremonies in January as appropriate, given the health crisis and other factors that may impact it.”

A number of corporations that have been major donors to past presidential inaugurations — like Coca-Cola, Google and United Parcel Service — said this week that they still had not decided how much, or whether, to donate, though Google noted it had provided “online security protections for free” to the inaugural committee.

“As you know this is a very different year and as such we have not yet made a decision,” Ann Moore, a spokeswoman for Coca-Cola, said in a statement.

A spokeswoman for the investment bank JPMorgan Chase, which has donated to past inaugurations, said that instead of giving to Mr. Biden’s committee, it would be donating to food banks in Washington and the hometowns of Mr. Biden (Wilmington, Del.) and Ms. Harris (Oakland, Calif.) “to help those impacted by the pandemic.”

An inauguration spokesman would not say how much had already been raised, or what the fund-raising goal was.

Funds raised for inaugurations cannot be transferred to federal campaigns or party committees. Past inaugural committees have donated unspent funds to charities including those engaged in disaster relief, as well as groups involved in decorating and maintaining the White House and the vice president’s residence.

The effort by Mr. Biden’s inaugural committee to raise funds from corporate donors prompted puzzlement and objections from liberal activists, who have expressed concern about what they see as the Biden team’s coziness with corporate interests.

A coalition of about 50 liberal groups released a letter to the inaugural committee on Wednesday urging it to forgo donations from corporations to prevent them “from wielding undue influence,” and questioning the need for such donations, given the likelihood that Mr. Biden’s inauguration would cost less than previous inaugurations.

“The drive to raise so much money without a clear use for it is perplexing, and the appearance of doing so is disconcerting,” said the letter, which was organized by Demand Progress, a group that has also urged Mr. Biden not to hire corporate executives and consultants or lobbyists.

There are no legal limits on the sizes of donations that inaugural committees can accept, and there are few restrictions on who can give.

Those restrictions are less stringent than the ones adopted by former President Barack Obama for his 2009 inauguration. His inaugural committee refused corporate donations and said it limited individual donations to $50,000, though he loosened the rules for his second inauguration in 2013.

While Mr. Trump’s team said it would not accept contributions from lobbyists for his 2017 inauguration, its fund-raising was otherwise mostly unrestricted, resulting in a record $107 million haul.

The Biden team has so far released few specifics regarding plans for the inauguration, other than a statement on Tuesday urging people not to travel to Washington to attend the event given the pandemic and noting that the “ceremony’s footprint will be extremely limited.”

In an expression of just how unusual the event will be, the Biden inaugural committee named Dr. David Kessler, a former Food and Drug Administration commissioner, as an adviser to help with decisions on what kinds of events it can hold.

“We are asking Americans to participate in inaugural events from home to protect themselves, their families, friends and communities,” Dr. Kessler said in a statement.

In a typical inauguration year, a congressional committee that organizes the swearing-in ceremony typically distributes 200,000 tickets to lawmakers for seats on the platform, risers and seating close to the West Front of the Capitol, which are then distributed to constituents and friends who want to attend.

But this year, the committee announced it would give just two tickets to the outdoor festivities to each of the 535 members of Congress, for them and a guest to attend.

Beyond this event, it is largely up to the Biden inauguration committee, where officials have said in recent days they are still working to “reimagine” and “reinvent” the inauguration.

There will still be some kind of an inauguration parade, but it will be considerably pared down and will most likely feature video or live shots of groups performing from spots across the country.

The inaugural committee this week disclosed that it had retained Ricky Kirshner, a New York-based entertainment industry television and events producer. His past experience includes the Super Bowl halftime show this year that featured Shakira and Jennifer Lopez, as well as past Tony Awards and Kennedy Center Honors events, and the largely virtual 2020 Democratic National Convention, among many other events.

Major donors will also get “V.I.P. tickets” to some kind of future event to celebrate the start of the new administration in person, according to the one-page menu of donor perks.

But given the continued uncertainty associated with the pandemic, that event is listed as “date to be determined.”