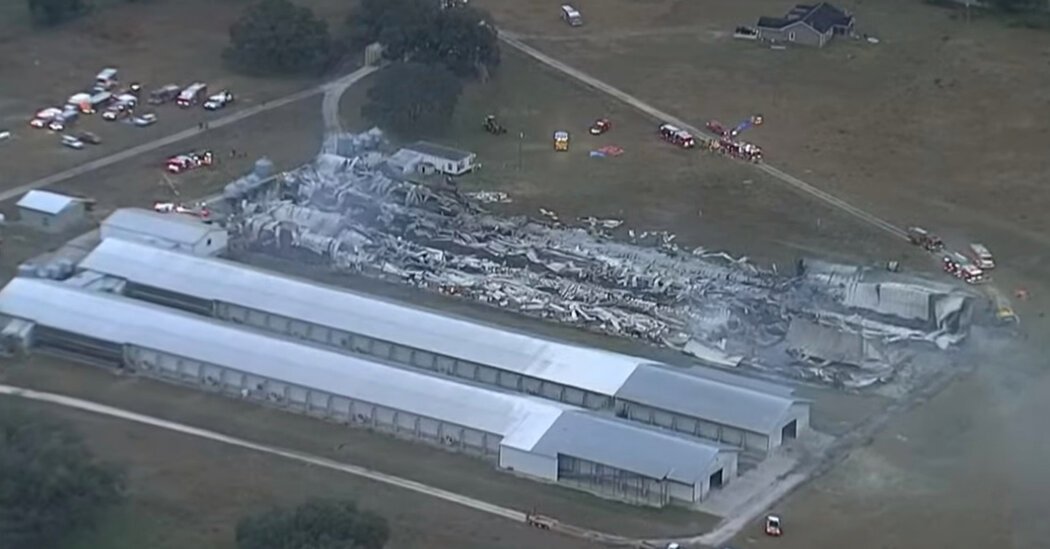 At least 240,000 chickens were killed early Thursday when a fire swept through two densely packed barns in Florida owned by one of the nation’s largest distributors of shell eggs, the authorities said.

The fire was reported around 1 a.m. by farmhands at the Cal-Maine Foods facility in Dade City, Fla., Shawn Whited, operations division chief for the Pasco County Fire Rescue, said in an interview.

Both barns that were destroyed housed two large coops, each of which had been filled with more than 60,000 young hens, known as pullets, that had not yet started to lay eggs, officials said. The farm is in a rural part of the county — about 40 miles northeast of Tampa — that does not have fire hydrants.

“So we had to bring in tanker trucks,” Chief Whited said.

The cause of the fire was under investigation by the state fire marshal, according to Chief Whited, who said that the financial loss had been estimated at $1 million. The farm — one of dozens of facilities that Cal-Maine Foods, based in Jackson, Miss., operates across the country — has four barns altogether.

The blaze was the latest in a spate of barn fires across the United States that have drawn the scrutiny of animal welfare groups, which had previously criticized Cal-Maine Foods about the conditions at its facilities.

Max Bowman, the chief financial officer and a vice president of Cal-Maine Foods, said in an interview on Thursday night that 2 to 3 percent of the company’s pullets had been lost in the fire and that it was not expected to disrupt production.

“Our core asset are these pullets and these hens,” Mr. Bowman said. “We take every reasonable measure to take care of them. That’s our regret that we lost those birds.”

Mr. Bowman said that pullets do not have the body mass of fully developed chickens and need to be kept warm, which may have contributed to the fire.

“It usually comes down to some sort of heating problem or electrical problem,” he said.