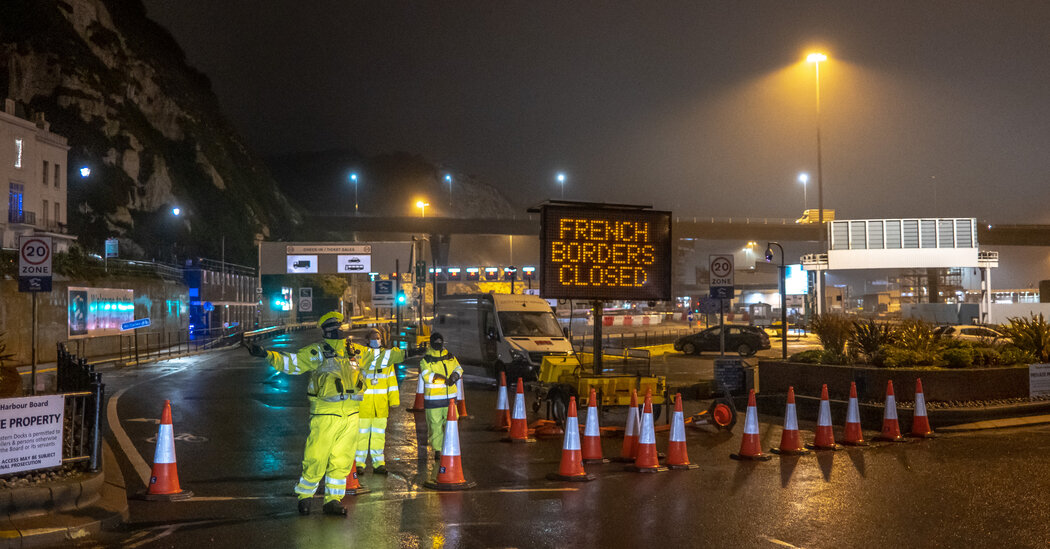 LONDON — As nation after nation rushed this week to close their borders with Britain, the moves brought back memories of the way the world reacted after the coronavirus first emerged broadly in the spring. Most of those initial travel prohibitions came too late, put in place after the virus had already seeded itself in communities far and wide.

This time, with countries trying to stop the spread of a new, possibly more contagious coronavirus variant identified by Britain, it may also be too late. It is not known how widely the variant is already circulating, experts say, and the bans threaten to cause more economic and emotional hardship as the toll wrought by the virus continues to grow.

“It is idiotic” was the blunt assessment of Dr. Peter Kremsner, the director of Tübingen University Hospital in Germany. “If this mutant was only on the island, only then does it make sense to close the borders to England, Scotland and Wales. But if it has spread, then we have to combat the new mutant everywhere.”

He noted that the scientific understanding of the mutation was limited, and its dangers unclear, and described as naïve the notion that the variant was not already spreading widely outside Britain.

Also, Britain has some of the most sophisticated genomic surveillance efforts in the world, which allowed scientists there to discover the variant when it might have gone unnoticed elsewhere, experts said.

Dr. Hans Kluge, the World Health Organization’s regional director for Europe, said that member states would try to come up with a coherent approach to any threat posed by the variant. At the moment, he wrote on Twitter, “limiting travel to contain spread is prudent until we have better info.”

But he noted, “no one is safe until everyone is safe.”

With growing calls for the United States to join the dozens of nations imposing bans on travel from Britain, Dr. Anthony Fauci, America’s top infectious disease expert, urged caution, saying there was a good chance the variant was already there.

“I don’t think that that kind of a draconian approach is necessary,” he said on “PBS NewsHour” on Monday night. “I think we should seriously consider the possibility of requiring testing of people before they come from the U.K. here.”

Gov. Andrew M. Cuomo of New York said that British Airways, Delta Air Lines and Virgin Atlantic had agreed to require a negative coronavirus test result from passengers boarding flights from Britain to New York. In the absence of federal action, other state and local leaders called for similar measures before the peak holiday travel days.

Many countries already require a negative coronavirus test for entry, but cutting off all travel between nations is a more fraught proposition.

The European Commission, the European Union’s executive branch, urged members of the bloc to lift blanket bans on Britain so essential travel can take place. But for the moment, nations seem to prefer setting their own rules.

Late Tuesday, France eased back on a border closing it announced Sunday that had stranded more than a thousand truck drivers. Now, it says, select groups of people can cross the border if they had been recently tested for the virus.

The situation is convulsing a travel industry already battered by the pandemic, forcing millions to change their holiday plans and injecting a fresh dose of anxiety at the end of a bleak year.

At the same time, a separate variant of the virus is causing concern as it spreads in South Africa. At least five nations — Germany, Israel, Saudi Arabia, Switzerland and Turkey — have barred travelers coming from South Africa.

Sweden blocked travel from Denmark after reports that the British variant had been detected there. And Saudi Arabia went even further, suspending all international air travel into the kingdom for at least a week.

The South Africa variant became the subject of intense scientific research after doctors there found that people infected with it carry a heightened viral load — a higher concentration of the virus in their upper respiratory tract. In many viral diseases, this is associated with more severe symptoms.

Because it is not known how widely the two variants are spreading, it is impossible to assess what effects the attempts to isolate Britain and South Africa will have on containing them.

With its sophisticated genomic surveillance efforts, Britain has sequenced about 150,000 coronavirus genomes in an effort to identify mutations. That’s about half of the world’s genomic data about the virus, said Sharon Peacock, the director of the Covid-19 Genomics U.K. Consortium and a professor of microbiology at the University of Cambridge.

In Wales, a country of three million people, geneticists have sequenced more coronavirus genomes in the last week than scientists have examined during the entire pandemic in France, a country of 67 million, said Thomas Connor, a professor who specializes in pathogen variation at Cardiff University.

“It is probable that similar variants are popping up around the world,” he said. “And there are variants that are likely to be popping up in other places which are spreading locally and which would be completely unregarded because there’s no sequencing in place.”

British officials have said that the first case of the variant now spreading widely in the country was detected in Kent, in southeastern England, on Sept. 20. By November, around a quarter of cases in London — an international hub of commerce — involved the new variant. Just a few weeks later, the variant was estimated to be responsible for nearly two-thirds of cases in Greater London.

That means that by the time Prime Minister Boris Johnson addressed the nation on Saturday night to announce severe new lockdown measures for millions of people in and around London, the variant had been spreading for months.

Officials in France and Germany acknowledged on Tuesday that the variant might already be circulating in their countries. The European Centre for Disease Prevention and Control said a few cases with the new variant had been detected in Denmark, Iceland and the Netherlands. And health officials in Australia and Italy have reported cases in travelers from Britain.

Those who support the travel bans said they could play a role in keeping cases of new variants lower.

“Numbers matter,” Emma Hodcroft, a researcher at the University of Bern in Switzerland, wrote on Twitter. “The number of people with the new variant in continental Europe is likely still small: with testing, tracing, identification and restrictions, we might be able to prevent them from passing the virus on.”

If the variant does prove to be significantly more contagious than others in circulation and becomes more widespread, it could complicate global vaccination efforts.

Dr. Ugur Sahin, a co-founder of BioNTech, which, with Pfizer, developed the first vaccine approved in the West to combat the coronavirus, cautioned that it would be two weeks before full results from laboratory studies would allow for a fuller understanding of how the mutations might alter the vaccine’s effectiveness.

“We believe that there is no reason to be concerned until we get the data,” he said.

If an adapted vaccine were necessary, it could be ready within six weeks, Dr. Sahin told a news conference on Tuesday. But it would require additional approval from regulators, which could increase the wait time, he said.

He also said that a more efficient virus would make it harder to achieve levels of immunity needed to end the pandemic.

“If the virus becomes more efficient in infecting people,” he said, “it might need even a higher vaccination rate to ensure that normal life can continue without interruption.”