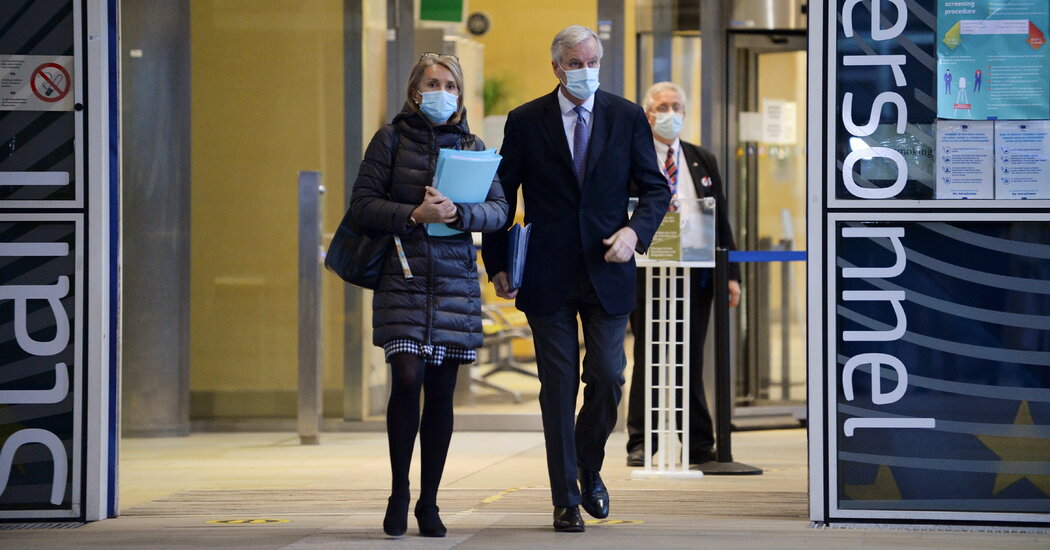 LONDON — Britain and the European Union appeared on the cusp of a landmark post-Brexit trade agreement on Wednesday, with negotiators in Brussels all but resolving the final issues, a person briefed on the talks said.

An announcement appeared to be imminent, likely on Christmas Eve, which would be exactly a week before the Dec. 31 deadline for Britain and the European Union to negotiate long-term trade arrangements.

A spokesman for the European Commission, Eric Mamer, posted on Twitter after midnight that work on the agreement “will continue throughout the night,” adding that “hopefully,” it would be an “early start tomorrow morning.”

Negotiators are scrambling to finish their talks before Christmas in part to avoid the danger that the deal could not be adopted in time for Jan. 1. Without a deal in place, Britain and the European Union would default to trading under World Trade Organization rules, levying tariffs on each other’s goods.

That could cause severe disruptions in trade across the English Channel, at a time when trade and travel between Britain and the continent has already been interrupted by fears over a fast-spreading variant of the coronavirus, which emerged in Britain and led European countries to impose travel bans against the United Kingdom.

Rumors that a deal was close began circulating in London and Brussels on Wednesday afternoon, but neither the European Commission nor 10 Downing Street confirmed it or issued updates on the negotiations.

How the deal is rolled out is sensitive for both sides because of the extraordinary stakes involved. Prime Minister Boris Johnson will be eager to present the deal as a fulfillment of his promise to assert Britain’s sovereignty. The European Union will be keen to show that it defended the integrity of the single market.

Much of the talks in the closing days centered on securing the European Union’s access to British fishing grounds.

During the 2016 referendum campaign on Brexit, Mr. Johnson promised fishermen that if Britain departed the bloc, they would reclaim control over their national waters, which they have been sharing with French and other European fishing crews for decades or, in some cases, centuries.

But fishing is also resonant in France, not least for President Emmanuel Macron, who faces an election in 2022. French fleets depend on fish caught in British waters. Under current quotas, for example, 84 percent of the cod caught in one zone off the English coast is allocated to France, while just 9 percent goes to Britain.

European negotiators pushed Britain to continue to allow their fishing crews to have broad access to its waters. The negotiations turned on setting a transition period for that access and agreeing to British demands that British fishing crews retain a higher percentage of the value of the overall catch.

The two sides are also hammering out a complex agreement on so-called level playing field principles, which are designed to prevent British companies from gaining an unfair advantage over their European competitors through state aid or by enjoying less rigorous environmental or labor laws.

The negotiations, which began after Britain formally left the European Union in January, sputtered along with fairly little notice until the last few weeks, in part because they were eclipsed by the pandemic. In June, Mr. Johnson spurned a chance to extend the talks into 2021, insisting he was willing to risk a no-deal Brexit.

Mr. Johnson repeated that message in recent days, saying that Britain would “prosper mightily” even without a deal. But as the deadline drew near, he inserted himself into the talks, flying to Brussels two weeks ago for dinner with the president of the European Commission, Ursula von der Leyen.

Mr. Johnson said he was eager to engage directly with Mr. Macron and Chancellor Angela Merkel of Germany, but the European Commission has kept control over the talks, which are being conducted by Michel Barnier.

For Mr. Johnson, striking a deal would enable him to deliver on his promise to “Get Brexit done.” But the nature of the deal will be important to pro-Brexit lawmakers in his Conservative Party, who will scrutinize the details for evidence that Britain surrendered its sovereignty to the European negotiators.

Striking a deal so late, however, means that the British Parliament will have very little time to study it before voting on it. The timing is such that the European Parliament will likely be asked to allow it to enter into force provisionally on Jan. 1 before it can consider the agreement later in the month.

The French government’s decision to halt freight traffic across the channel for two days because of fears over a new strain of the virus provided a glimpse of what a no-deal Brexit might look like. It also raised tensions with France, with the British tabloids taking aim at a familiar target.