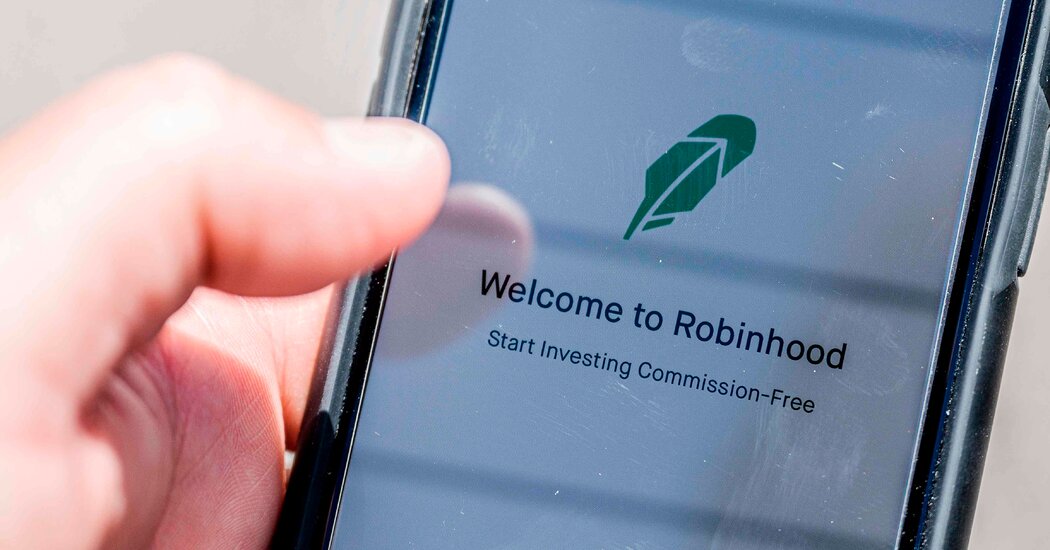 In 2020, wild fluctuations in the stock market caused by the pandemic turned millions of people into opportunistic investors. After stocks plunged in March, experienced traders and Nasdaq novices poured their dollars into buzzy tech companies like Tesla and Zoom, as well as businesses bludgeoned by Covid restrictions, including airlines, restaurants and cruises.

To reflect a year of volatility and impulsive investments, Robinhood, the popular trading app that has spurred controversy by marketing itself to young people, released a year-end data dump for its users. A news release promised that the Robinhood Recap would be a “special personalized experience that will take you through your investing journey this year — from views to trades, your most memorable investing moments, large or small, and other milestones along the way.”

Robinhood’s wrap-up — available to anyone who had an active account before Dec. 15 — showed the stocks users purchased, dividends and interest earned, which stock in their portfolio they clicked on the most and other data.

Some people praised the recap’s aesthetic and said they enjoyed finding out how early they were to adopt Robinhood. “We’ve been delighted to hear from many customers who enjoyed taking a look back at their year in investing, from saving screenshots of their recaps to sharing on social media,” a company spokesman wrote in an email.

Robinhood is one of several popular consumer apps to embrace shareable, data-driven year-in-review lists, like Spotify Wrapped, a recap of the upbeat or fittingly depressing songs people listened to in 2020, and Strava’s Year in Sport, which enumerates the miles its users ran and cycled. These packages use upbeat language and appealing graphic design to encourage their users to share them on social media.

But for most people, personal financial decisions aren’t as readily shareable as, say, their most-played artist of the year. They’re inherently private.

Kareem Rahma, 34, a comedian and entrepreneur, wrote in an email that he would “never share this information publicly as it is much more sensitive than my listening habits on Spotify.”

Still, plenty of people posted screen shots of their recap on social media. Many were struck by how often they checked the price of particular stocks.

“Tesla just in general has been growing like crazy, and obviously their stock has taken off, so it was kind of funny how apparently often I checked up with it,” said Eric Milligan, an information technologist.

Jordan Bishop, 29, was also surprised by that slide in his recap. “Before you know it, you’ve checked it 10 times in a day, and it’s giving you a little dopamine boost every time,” he said.

“Robinhood wrapped made me realize I was very obsessed over every dollar up or down in the market and it was just very unhealthy,” Rajat Kamboj, a 20-year-old college student, wrote in an email. His recap told him that he’d checked the value of his Tesla stock 18,656 times in 2020, averaging more than 50 times per day. (“You’re just a little attached,” his recap read.)

“As a self-directed brokerage, we do not give investment advice,” a Robinhood spokesman said in a statement. “The goal with Robinhood Recap was to celebrate milestones and give people a broader view on their activity over the year, helping them frame their behavior over the long term.”

The recap became a meme on the acerbic finance-focused subreddit WallStreetBets; one user created a parodic version of a recap post, revealing extensive losses. (“You made some risky calls…”)

“This year included an unprecedented surge in retail investing,” the Robinhood spokesman wrote. “We welcomed millions of new customers to Robinhood, about half of whom were investing for the first time. With Robinhood Recap, we sought to remind both new and longtime customers about their investing journey.”

Robinhood added three million users this year, bringing its total to 13 million. The app has become a favorite of young and inexperienced investors, enticed by no-fee trading, offers of free stocks and an engaging user interface that uses what a New York Times report in July described as the “Silicon Valley playbook of behavioral nudges and push notifications.”

The Times article stated that Robinhood’s users trade risky products at a faster pace than clients of major brokerage firms; for example, Robinhood users bought and sold 88 times as many risky options contracts as Charles Schwab clients did.

Several people said that the recap seems to fit into the company’s broader strategy of positioning itself as a lifestyle experience, rather than just another boring trading platform, in order to appeal to investors who are less sophisticated.

“Their bright and colorful U.I., the ease of access to opening margin accounts and access to options, and now Robinhood Recap give me an idea that they’re trying to appeal to younger people,” Luke Thornburg, 19, wrote in an email. “These younger people who are generally inexperienced and more risk-tolerant might choose Robinhood because of these things.” He said that he had lost money on risky options trading when he first began using the app.

“Spotify seems to be the clear kind of comparison there,” said Mr. Bishop, the founder of a personal finance website focused on air travel. “I just find it fascinating, and a little dangerous, how, you know, personal finance and social media are blending together in this way.”

Gina Fuchs, 24, a community coordinator for a nonprofit coding camp for young women, wrote in an email: “The app does a great job of being accessible to small traders or people who are dipping their toes into the stock world (me!) and for that reason is attractive to millennials. If the data was more creatively captured, it would have been an interesting feature for them.”

Though this year has been good for Robinhood from a business perspective — a $200 million funding round in August boosted its valuation from $8.6 billion to $11.2 billion — the company has also faced intense scrutiny for its practices.

In June, after a 20-year-old user killed himself after erroneously believing that he had a negative balance of $730,000 on the app, Robinhood faced a round of critical press, revolving around the app’s appeal among young, inexperienced investors.

Last week, the Securities and Exchange Commission charged the company with “misleading customers about revenue sources,” citing “repeated misstatements that failed to disclose the firm’s receipt of payments from trading firms for routing customer orders to them.” Robinhood agreed to pay a $65 million fine. And on Wednesday, Bloomberg News reported that a complaint filed in San Francisco against Robinhood Financial could become a class-action lawsuit.

“The settlement relates to historical practices that do not reflect Robinhood today,” Dan Gallagher, Robinhood’s chief legal officer, said in a statement. “We recognize the responsibility that comes with having helped millions of investors make their first investments, and we’re committed to continuing to evolve Robinhood as we grow to meet our customers’ needs.”

Brett Robinson, a 28-year-old who works in film development, saw the recap as a cultural artifact of late capitalism. “It inadvertently reminded me of the truism ‘If something’s free, you’re the product,’” he wrote in an email. “Of course Robinhood’s more interested in our engagement than any of my piddly returns.”