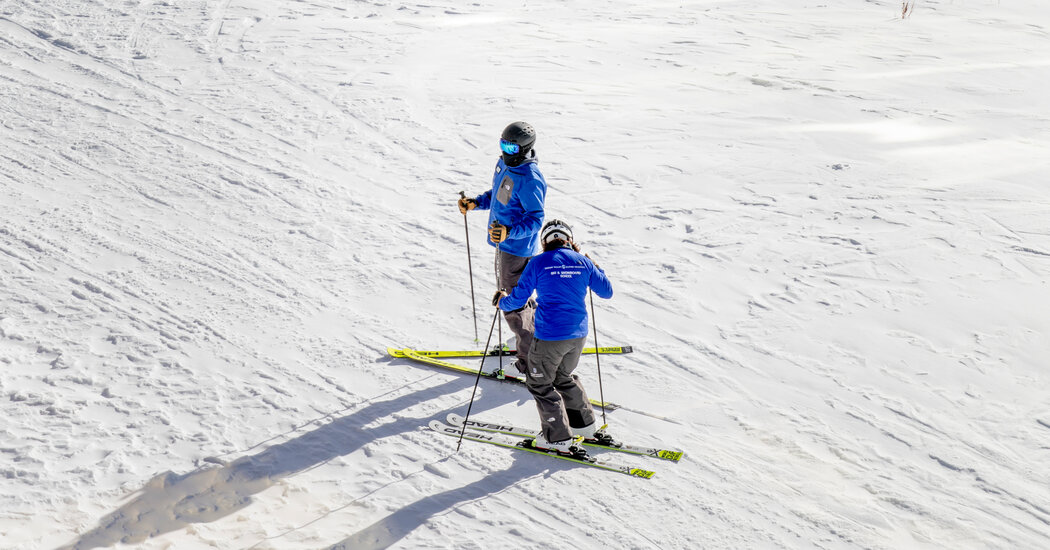 OLYMPIC VALLEY, Calif. — A trickle of skiers recently zigzagged down the slopes at the Squaw Valley Ski Resort. Couples and families wandered through the resort’s village, which was decorated with golden Christmas lights and frosted with snow.

It looked like the beginning of a merry season. But a closer inspection revealed it was anything but.

Restaurant patios were nearly empty as masked workers swept through with lime green disinfectant sprayers strapped to their backs, part of the $1 million that Squaw Valley has spent on sanitizing equipment and other safety measures. At ski lifts, sparse groups waited in socially distant lines. The resort felt “so dead,” said a skier, Sabrina Nottingham, partly because it was limiting ticket sales to fewer than 50 percent of the norm.

Squaw Valley, a marquee destination for winter sports enthusiasts, is one of many ski resorts across the country bracing for a highly unpredictable season. Forced to rethink how to operate in the coronavirus pandemic and with vaccines still rolling out, resorts have made a plethora of changes in places such as Aspen, Colo.; Park City, Utah; Taos Ski Valley, N.M.; and Killington, Vt. Many are setting visitor restrictions and requiring ticket reservations; New Mexico has limited resorts to 25 percent of capacity.

Resorts are also minimizing in-person interactions by installing kiosks for ticket pickups, adding space between people in line for ski lifts and gondolas, requiring masks, limiting the number of people on a lift at once and, in some places, shutting down indoor dining.

While the pandemic has dealt a heavy blow to the entire travel industry, ski resorts may feel a disproportionate impact this winter because of their short window of business. The ski industry already took a hit in the spring when the pandemic struck and many resorts had to close early, leading to $2 billion in losses and causing layoffs or furloughs of thousands of employees, according to the National Ski Areas Association, a trade group. The industry saw its lowest number of visits, 51 million, since the 2011-12 season, the association said.

Now resorts such as Squaw Valley are setting their expectations low for the new ski season.

“I don’t think that anybody in the business is looking to have this be their best year ever,” said Ron Cohen, the president of Squaw Valley and neighboring Alpine Meadows, which laid off 2,000 seasonal workers in the spring. “We want to preserve our businesses so that when Covid’s over, we have the opportunity to not have suffered so much damage that maybe we can’t stand back up.”

Mike Pierce, a spokesman for Mount Rose Ski Tahoe, a resort in western Nevada, said the mind-set was “to just maintain status quo and survive.” He declined to provide any financials, but said, “if we break even, that’s almost considered a success.”

Even before the pandemic, the ski industry was laboring to build interest in the sport. The number of skiers has stagnated in the past decade, according to the National Ski Areas Association. Adrienne Isaac, a spokeswoman for the trade group, said resorts have tried to make skiing and snowboarding more accessible for newcomers, but have grappled with perceptions that they primarily cater to the rich and white. Climate change also continues to affect snowfall, she said, which can lead to shorter seasons.

How the ski resorts do this winter will have a domino effect on tax revenues for state economies. In New Mexico, the truncated ski season last winter and this spring generated $41 million in taxes, but George Brooks, the executive director of the state’s ski association, said he expected no more than 40 percent of that number in the coming months.

Vail Resorts, the world’s largest ski company with 37 resorts around the globe, including 34 in the United States, reported in an earnings call on Dec. 10 that it lost $153 million from August through October, wider than the loss of $106.5 million in the same period a year ago. Rob Katz, chief executive of Vail Resorts, said that season pass sales were up about 20 percent, but he expected fewer visitors and less revenue this winter than in previous seasons.

For smaller resorts, the pain may not be as severe. The Diamond Peak Ski Resort in Incline Village, Nev., said it came out about $1 million ahead of projections after the spring shutdown. Mike Bandelin, the resort’s general manager, said smaller resorts often operate at a loss in the final weeks of the season, so closing early actually saved money.

Many resorts said they still expected some die-hard skiers and powderhounds to show up this winter, along with locals and those who have relocated to second homes nearby. At the Winter Park Resort west of Denver, a crush of eager skiers on opening weekend this month caused crowding at lift lines. The resort quickly enacted measures to allow more spacing, said Jen Miller, a spokeswoman.

But the visitors who will not come, the resorts and other ski experts said, are most likely casual skiers and those traveling from long distances.

“We’re going to lose the mom and pop that want to bring their kids up,” Mr. Brooks said.

In Colorado, the Aspen Skiing Company, which operates four ski areas, has had steady business since reopening on Nov. 25, but will miss out on the 20 percent of its yearly visitors who come from other countries, a spokesman, Jeff Hanle, said. He said Aspen might also see fewer out-of-state travelers, especially if they live in places where they have to isolate upon their return.

“You’ve got to be a pretty dedicated skier to say, ‘I’m going to go ski, and I know when I go home, I’ve got to quarantine,’” he said.

Even if resorts make it through the winter, smaller businesses that rely on skiers coming to town — like restaurants, hotels and retail stores — might not be so lucky.

At the Stratton Mountain Resort in Stratton, Vt., an Irish pub called Mulligan’s has laid off half of its staff. Since visitors to Vermont, which gets 80 percent of its ski traffic from other states, have to quarantine for either one or two weeks before they can go anywhere, the owner of Mulligan’s, Tom Rose, said he expected to lose up to 60 percent of his normal winter sales.

“We survived Hurricane Irene. Our sales took a real dive after 9/11. We’ve made it through the Great Recession,” Mr. Rose said. But “this pandemic is by far the worst.”

There are some bright spots. Backcountry skiing, or ski touring — which often involves climbing secluded, snowy mountain ranges — is booming. Backcountry equipment sales jumped 76 percent from August through October compared with the same time a year ago, according to the NPD Group.

“The Covid environment that favors outdoor, socially distant recreation activities, coupled with the restrictions in place at ski resorts, has accelerated the interest in backcountry skiing this season,” said Eric Henderson, a spokesman for Snowsports Industries America, a trade group.

Those who have made the trips to the resorts said they were glad they made the effort. At Squaw Valley recently, Ms. Nottingham, 21, who was visiting with other students from California State University, San Luis Obispo, said that even though the resort was quiet, the experience “felt more safe than going into a grocery store because everyone’s all covered up anyway.”

Squaw Valley, which opened in 1949 and hosted the 1960 Winter Olympics, has undergone significant changes in recent years. In 2010, it was bought by a private equity group called KSL Capital Partners, and merged with neighboring Alpine Meadows the following year. Combined, the two resorts stretch for 6,000 acres, the most of any in the Lake Tahoe area, and have 42 lifts and more than 270 trails.

In August, Squaw Valley said it would change its name by 2021, because “squaw” is considered a racist and sexist term for Native American women.

But nothing the resort has been through has rivaled the chaos of the pandemic, Mr. Cohen said. While he declined to disclose the financials for Squaw and Alpine, he described the losses in the spring as “devastating” and said the resorts were “operating at lower profit margins” this winter, with weaker sales.

The disruption became doubly evident this month when a new stay-at-home order took effect in the area, forcing resorts to cancel hotel stays and adding another wrinkle for potential visitors.