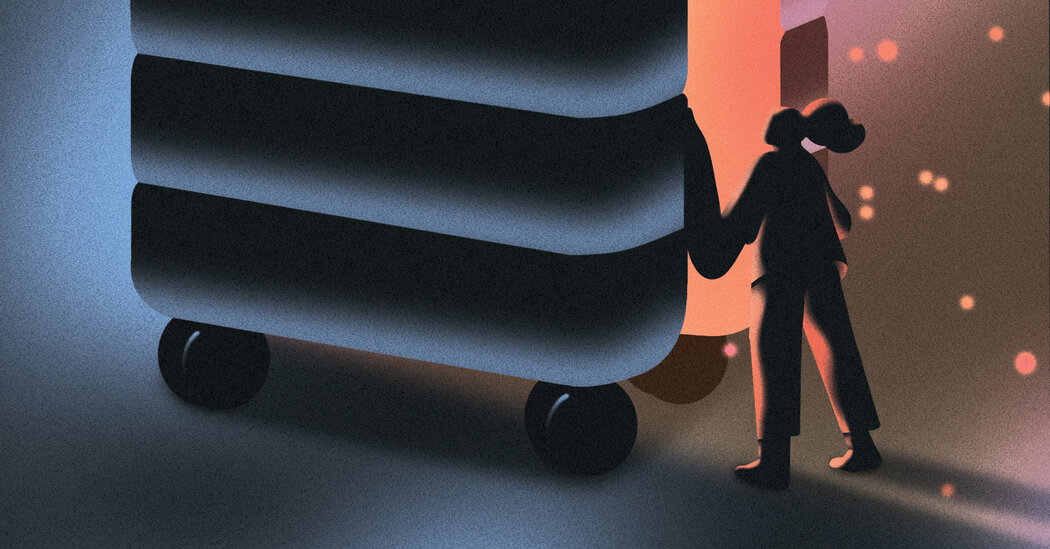 In early March, I was walking around the most magical place on earth — Disney World’s Magic Kingdom in Orlando, Fla. — asking guests why they were comfortable being at a theme park with thousands of strangers and sticky-fingered children as a virus that we then believed to be passed through touch was spreading throughout the world.

Grandparents, parents and children talked about what brought them to the park: Many had the trip planned for a long time; most had saved up and didn’t want to miss out on the chance to visit. One mother gave it to me straight: “If I’m going to get sick and die, I might as well do it at Disney World.”

People keep asking me what it’s like to be a travel writer who can’t travel right now. My answer is that daydreaming about travels past and future — living through old photos and virtual tours of faraway places — is what’s keeping me going.

Whether the destination is near or far, Florida or Morocco, we travel for the same reasons: We want to connect with others, learn about new places and see things we haven’t seen before. That won’t change after the pandemic, but some things will.

Testing, health passports, cleaning robots, plexiglass dividers — these will most likely all be part of the experience. But travel will change in deeper ways. Many of us have been reflecting on the irony that we traveled to see and experience new things, but often ended up exactly where everyone else had gone, taking the exact same selfies — in Venice, at Machu Picchu, through the steam of Icelandic spas.

When I talk to people now about their fantasy travel plans, they rarely mention famous sights like these; they’re more focused on meaningful experiences, and seeing friends and loved ones.

When the tourism industry shut down, it happened fast. On March 11, Tom Hanks and Rita Wilson said that they had the coronavirus. On the same day, the N.B.A. suspended its season after a Utah Jazz player was found to have tested positive.

The next day, as many travel agents tell it, cancellations poured in. Suddenly, Americans were terrified. Flights were grounded and cruise ships sailed aimlessly with no country willing to let them dock. Countries instituted fast-changing and chaos-inducing quarantine and travel restrictions. Americans stranded abroad described feeling abandoned by their government.

This sense of being left to figure things out alone permeated the travel and tourism sector, as it did everywhere. Airlines said passengers had to wear masks, but if people didn’t listen, flight attendants were left to fend for themselves.

“The biggest issue is that we do not have a coordinated response from the federal government,” Sara Nelson, president of the Association of Flight Attendants union, told me over the summer.

The whole travel industry has been devastated by the pandemic. Nearly 40 percent of all travel jobs, 3.5 million positions, vanished between March and November. Six months into the pandemic, the American Hotel and Lodging Association found that most hotels across the country were struggling to keep their doors open and were unable to rehire all their staff because of the historic drop in travel demand.

In addition to livelihoods, the industry has lost something less tangible but still fundamental — the ability to shake hands, hug, see smiles. Hospitality employees are possibly the friendliest people out there, and for them to not be able to share that has been the source of its own kind of devastation.

Over the summer, Americans were afraid to get on planes or sleep in hotel beds made by strangers, and yet as they grasped for control, they began to itch for adventure. Many went on road trips. First-time road trippers rented R.V.s, tried “van life” and embraced the outdoors.

Others missed traveling so much they booked cruises and flights to nowhere. “Some people just want to drag their bags through the airport and go check them in,” Loveleen Arun, a Bangalore-based travel agent who organizes luxury trips mostly for Indian travelers, told me in September.

Now many are booking trips for the latter half of 2021, in anticipation of things being some kind of normal by then. Dozens have told me about the first trips they’ll take when a vaccine is widely available.

Dinishia Wolford, a casino employee and writer who was furloughed this year, says that as soon as she can, she and her cousin are heading to Nintendo World in Japan to celebrate their 30th birthdays. She will, of course, dress like Princess Peach. Lindsey Unger, a marketing specialist in Seattle, told me she’ll be going to Egypt to visit her best friend, whom she hasn’t seen in two years.

As for me, my first post-pandemic trip will be to either New Zealand or Zambia to visit family — both journeys I’d hoped on taking this year. I can’t wait to slide into my window seat on the plane, dramatically moisturize my face and use a jade roller. I’ll savor my stroopwafel, pour the gin out of its small bottle into a cup of tonic and watch a movie on the small screen in front of me. I definitely won’t connect to the Wi-Fi.

As the industry prepares for its comeback, it presents people with the opportunity to travel differently. Expect some of the trends we’ve seen this year to continue, like road tripping and domestic trips that can be reached by direct flights to avoid layovers, said Misty Belles, the managing director of global PR for Virtuoso, a luxury travel network. And expect #vanlife TikToks to keep coming.

“Think fewer flights and less moving around, exploring one area versus many and accessing places by driving and cycling rather than more typical modes of transportation,” Ms. Belles said.

Experts also expect companies to change how they treat travelers. More flexible booking arrangements, with fewer change and cancellation fees, will be popular. People have become more accustomed to uncertainty. The pandemic has taught us anything can happen; we don’t want to be locked in.

Companies in the hospitality sector also have an opportunity to treat employees better, something travelers can help with by choosing to spend their money on companies that prioritize employee well-being and training, D. Taylor, the international president of Unite Here, the hotel and restaurant workers’ union, said this year.

And companies can live up to the promises they made in flurries of statements this summer in support of diversity and racial equality. Black U.S. leisure travelers spent $109.4 billion on travel in 2019, but many still say they aren’t treated as well or valued as much as white travelers.

Perhaps the biggest lesson is that instead of waiting 20 years to go on that big trip, go as soon as you can. Why wait for tomorrow when tomorrow could be the start of a pandemic?

“All the people who have been watching others travel from the sidelines and kept saying they would travel next year or the next year or the next year will be eager to get traveling” once it’s safe to do so again, said Dianelle Rivers-Mitchell, the founder of Black Girls Travel Too, a group tour company for Black women. People “now understand that nothing is guaranteed,” she continued. “If you want to see a place, just do it.”