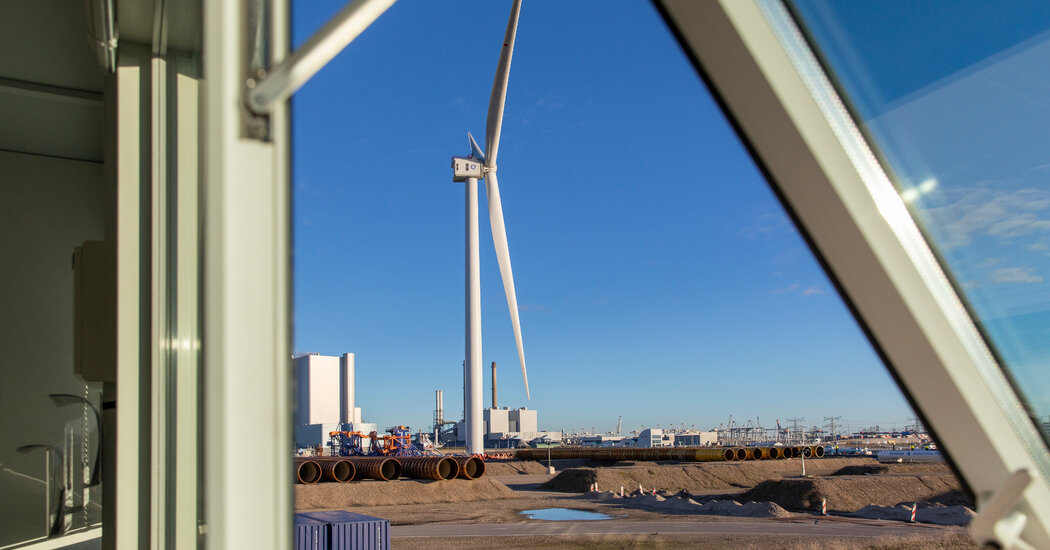 Twirling above a strip of land at the mouth of Rotterdam’s harbor is a wind turbine so large it is difficult to photograph. The turning diameter of its rotor is longer than two American football fields end to end. Later models will be taller than any building on the mainland of Western Europe.

Packed with sensors gathering data on wind speeds, electricity output and stresses on its components, the giant whirling machine in the Netherlands is a test model for a new series of giant offshore wind turbines planned by General Electric. When assembled in arrays, the wind machines have the potential to power cities, supplanting the emissions-spewing coal- or natural gas-fired plants that form the backbones of many electric systems today.

G.E. has yet to install one of these machines in ocean water. As a relative newcomer to the offshore wind business, the company faces questions about how quickly and efficiently it can scale up production to build and install hundreds of the turbines.

But already the giant turbines have turned heads in the industry. A top executive at the world’s leading wind farm developer called it a “bit of a leapfrog over the latest technology.” And an analyst said the machine’s size and advance sales had “shaken the industry.”

The prototype is the first of a generation of new machines that are about a third more powerful than the largest already in commercial service. As such, it is changing the business calculations of wind equipment makers, developers and investors.

The G.E. machines will have a generating capacity that would have been almost unimaginable a decade ago. A single one will be able to turn out 13 megawatts of power, enough to light up a town of roughly 12,000 homes.

The turbine is capable of producing as much thrust as the four engines of a Boeing 747 jet, according to G.E. will be deployed at sea, where developers have learned that they can plant larger and more numerous turbines than on land to capture breezes that are stronger and more reliable.

The race to build bigger turbines has moved faster than many industry figures foresaw. G.E.’s Haliade-X generates almost 30 times more electricity than the first offshore machines installed off Denmark in 1991.

In coming years, customers are likely to demand even bigger machines, industry executives say. On the other hand, they predict that, just as commercial airliners peaked with the Airbus A380, turbines will reach a point where greater size no longer makes economic sense.

“We will also reach a plateau; we just don’t know where it is yet,” said Morten Pilgaard Rasmussen, chief technology officer of the offshore wind unit of Siemens Gamesa Renewable Energy, the leading maker of offshore turbines.

Although offshore turbines now account for only about 5 percent of the generating capacity of the overall wind industry, this part of the business has taken on an identity of its own and is expected to grow faster in the coming years than land-based wind.

Offshore technology took hold in Northern Europe in the last three decades, and is now spreading to the East Coast of the United States as well as Asia, including Taiwan, China and South Korea. The big-ticket projects costing billions of dollars that are possible at sea are attracting large investors, including oil companies like BP and Royal Dutch Shell, that want to quickly enhance their green energy offerings. Capital investment in offshore wind has more than tripled over the last decade to $26 billion, according the International Energy Agency, the Paris-based forecasting group.

G.E. began making inroads in wind power in 2002 when it bought Enron’s land-based turbine business — a successful unit in a company brought down in a spectacular accounting scandal — at a bankruptcy auction. It was a marginal force in the offshore industry when its executives decided to try to crack it about four years ago. They saw a growing market with only a couple of serious Western competitors.

Still, G.E.’s bosses figured that to become a leader in the more challenging marine environment, they needed to be audacious. They proceeded to more than double the size of their existing offshore machine, which came to G.E. through its acquisition of the power business of France’s Alstom in 2015. The idea was to gain a lead on key competitors like Siemens Gamesa and Vestas Wind Systems, the Danish-based turbine maker.

A larger turbine produces more electricity and, thus, more revenue than a smaller machine. Size also helps reduce the costs of building and maintaining a wind farm because fewer turbines are required to produce a given amount of power.

These qualities create a powerful incentive for developers to go for the largest machine available to aid their efforts to win the auctions for offshore power supply deals that many countries have adopted. These auctions vary in format, but developers compete to provide power over a number of years for the lowest price.

“What they are looking for is a turbine that allows them to win these auctions,” said Vincent Schellings, who has headed design and production of the G.E. turbine. “That is where turbine size plays a very important role.”

Among the early customers is Orsted, a Danish company that is the world’s largest developer of offshore wind farms. It has a preliminary agreement to buy about 90 of the Haliade-X machines for a project called Ocean Wind off Atlantic City, N.J.

“I think they surprised everybody when they came out with that machine,” said David Hardy, chief executive of Orsted’s offshore business in North America.

As a huge buyer of turbines, Orsted wants to help “establish this new platform and create some volume for G.E.” so as to promote competition and innovation, Mr. Hardy said.

The G.E. turbine is selling better than its competitors may have expected, analysts say.

On Dec. 1, G.E. reached another preliminary agreement to provide turbines for Vineyard Wind, a large wind farm off Massachusetts, and it has deals to supply 276 turbines to what is likely to be the world’s largest wind farm at Dogger Bank off Britain.

The waves made by the G.E. machine have pushed Siemens Gamesa to announce a series of competing turbines. Vestas, which until recently had the industry’s biggest machine in its stable, is also expected to unveil a new entry soon.

“We didn’t move as the first one, and that of course we have to address today,” said Henrik Andersen, the chief executive of Vestas.

To pull off its gambit, G.E. had to start “pretty much from scratch,” Mr. Schellings said. The business unit called G.E. Renewable Energy is spending about $400 million on design, hiring engineers and retooling factories at St. Nazaire and Cherbourg in France.

To make a blade of such extraordinary length that doesn’t buckle from its own weight, G.E. called on designers at LM Wind Power, a blade maker in Denmark that the company bought in 2016 for $1.7 billion. Among their innovations: a material combining carbon fiber and glass fiber that is lightweight yet strong and flexible.

G.E. still must work out how to manufacture large numbers of the machines efficiently, initially at the plants in France and, possibly later, in Britain and the United States. With a skimpy offshore track record, G.E. also needs to show that it can reliably install and maintain the big machines at sea, using specialized ships and dealing with rough weather.

“G.E. has to prove a lot to asset owners for them to procure G.E. turbines,” Mr. Barla said.

Bringing out bigger machines has been easier and cheaper for Siemens Gamesa, G.E.’s key rival, which is already building a prototype for a new and more powerful machine at its offshore complex at Brande on Denmark’s Jutland peninsula. The secret: The company’s ever larger new models have not strayed far from a decade-old template.

“The fundamentals of the machine and how it works remain the same,” said Mr. Rasmussen, the unit’s chief technology officer, leading to a “starting point that was a little better” than G.E.’s.

There seems to be plenty of room for competition. John Lavelle, the chief executive of G.E.’s offshore business, said the outlook for the market “gets bigger each year.”