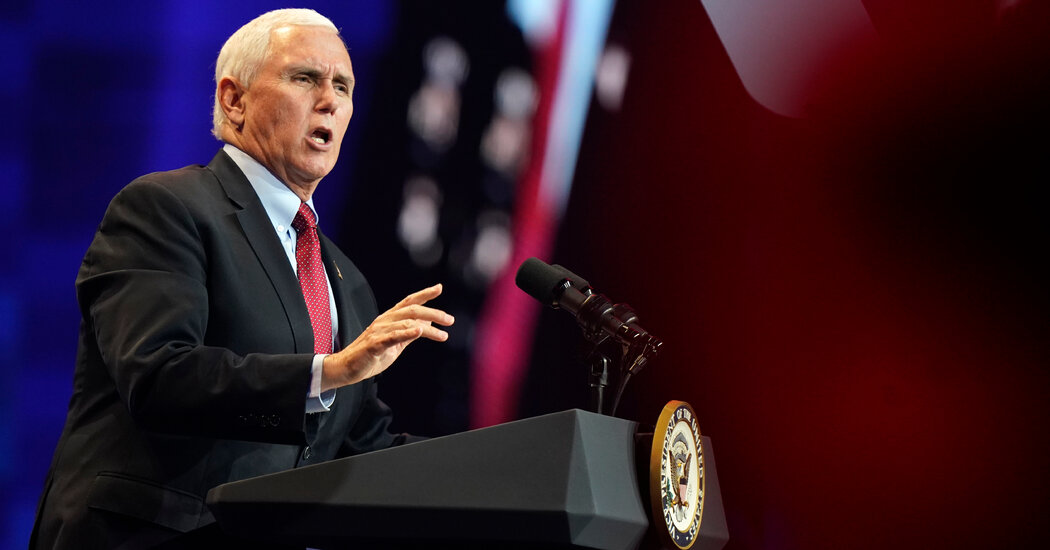 The Justice Department asked a federal judge on Thursday to reject a lawsuit seeking to pressure Vice President Mike Pence to overturn the results of the election, pitting the department against President Trump’s allies in Congress who have refused to accept President-elect Joseph R. Biden Jr.’s victory.

The department, acting on behalf of Mr. Pence, said that Republican lawmakers, led by Representative Louie Gohmert of Texas, could not invalidate the more than century-old law that governs the Electoral College process to expand an otherwise ceremonial role into one that has the power to reject electoral votes that were cast for Mr. Biden.

In a last-ditch bid to subvert the outcome of the election, Mr. Gohmert, along with other Republicans in Congress and electors in Arizona, filed a lawsuit against Mr. Pence on Sunday in an effort to force him to take on this expanded role. As the presiding officer of the Senate, Mr. Pence has the constitutionally designated responsibility of opening and tallying envelopes sent from all 50 states and announcing their electoral results when Congress convenes next week to certify the count. But changing his role would allow Mr. Trump to pressure his vice president to invalidate the results.

The Justice Department also made clear in its filing that it welcomed any comments from the federal judge in the case, Jeremy D. Kernodle of the Eastern District of Texas, that would clarify that Mr. Pence’s role in the election was purely procedural.

The White House counsel, Pat A. Cipollone, and the chief of staff, Mark Meadows, were aware the Justice Department was filing on Mr. Pence’s behalf before it happened, according to two people briefed on the discussions.

If a judge were to make clear that Mr. Pence does not have the authority to reject votes or decide the results, it could alleviate pressure on him. Since the election in November, Mr. Trump has become singularly focused on the proceedings of the Electoral College. He cut short his vacation at his Mar-a-Lago estate in Florida to return to Washington early, at least in part to push Republican lawmakers to reject the results when they meet on Jan. 6 to count the votes.

Should Judge Kernodle confirm that Mr. Pence has no influence over the Electoral College votes, Mr. Gohmert’s lawsuit could have the opposite of its intended effect.

In its response, the department also said that Mr. Gohmert did not have standing to sue Mr. Pence over performing the duties as defined by the act; rather, he and the other plaintiffs should sue Congress, which passed the original law.

The Justice Department’s move to squash an 11th-hour attempt to undo Mr. Biden’s victory could put it more at odds with Mr. Trump.

Mr. Trump’s relationship with Mr. Barr, whom he had once seen as the greatest ally he had in his cabinet, further soured after the president learned that he kept an investigation into the tax affairs of Mr. Biden’s son, Hunter Biden, under wraps during the election. Although it is department policy not to discuss investigations that could affect the outcome of an election, Mr. Trump accused his attorney general of disloyalty for not publicly disclosing the matter during the campaign.

And at his final news conference, Mr. Barr said that he did not “see any reason to appoint a special counsel” to oversee a tax investigation into the younger Mr. Biden or to dig into unfounded allegations that Mr. Trump lost because of widespread voter fraud.

Some inside the department believed that Mr. Barr’s statements may have helped Jeffrey A. Rosen, the acting attorney general. Mr. Rosen is likely to face tremendous pressure from the president to appoint additional special counsels and use the department’s other powers to help him undo Mr. Biden’s victory.

But now the department under Mr. Rosen has taken a step that Mr. Trump may see as an overt act intended to thwart one of his allies, opening it up to possible retaliation.