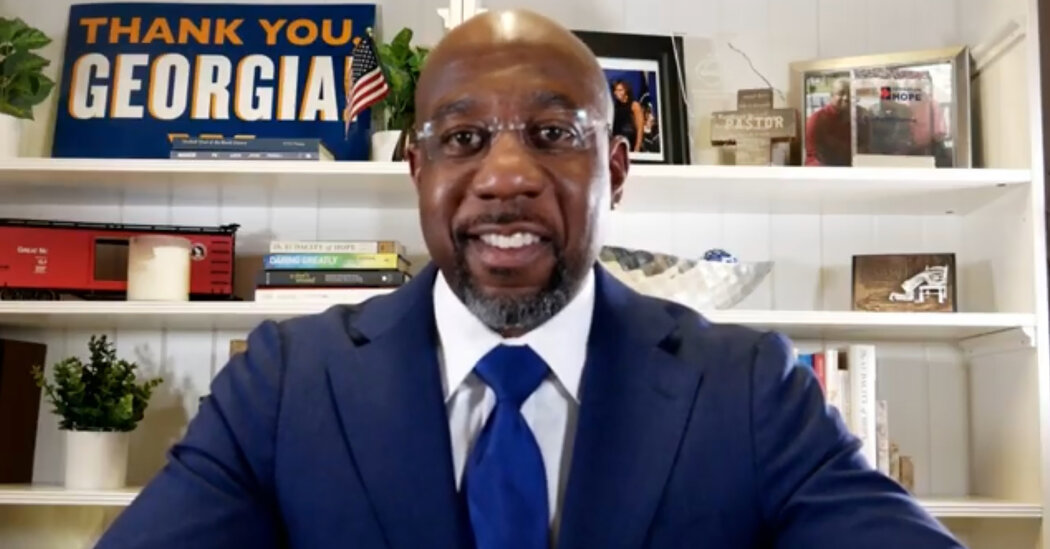 It was a big night for President-elect Joe Biden, as the results in Georgia’s Senate runoff elections appear set to give Democrats control of the chamber, and therefore Congress. That makes it more likely that Mr. Biden will be able to advance his policy agenda — within limits.

The latest: News organizations have called one of Georgia’s two Senate races for the Rev. Raphael Warnock, beating out the Republican incumbent and former Wall Streeter, Kelly Loeffler. (She has not conceded.) And with nearly all of the votes counted, Jon Ossoff, the Democratic challenger to the Republican incumbent, David Perdue, is ahead by more than 16,000 votes. (The margin is still within the limits of allowing for a recount and many media outlets have not yet called the race.)

Markets have mixed feelings. Dow futures were up and Nasdaq futures were down as the prospect of a Democratic sweep became more likely. The thinking, market watchers say, is that the old-economy stocks in the Dow would benefit from a bigger economic stimulus, but tech stocks could be hurt by higher corporate taxes and stricter antitrust scrutiny.

Saudi Arabia and Russia split on oil production quotas. Riyadh will cut its target by one million barrels, while Moscow will modestly increase its target. The changes, which will ultimately lead to a reduction in the global oil supply, reflect continued tensions among top petroleum producers.

Russia is formally identified as the “likely” culprit behind a huge hack. U.S. intelligence agencies said not only that the widespread breach of government and corporate computer systems had probably been ordered by Moscow, but also that it was still “ongoing.”

China sentences a former bank chief to death. The former chief of Huarong Asset Management, Lai Xiaomin, was found guilty of bribery, corruption and bigamy. China has shifted away from capital punishment for white-collar crimes, so the sentence sends a message about Beijing’s anticorruption drive.

Jack Ma isn’t missing. He’s simply “lying low,” according to CNBC, as speculation has swirled after canceled public appearances and a crackdown on his business empire by the Chinese government. (The latest on that front: Regulators reportedly want Ant Group, the financial company he co-founded, to share customers’ credit data.)

Qualcomm’s C.E.O. is stepping down. Steve Mollenkopf will retire in June after leading the chip maker for seven years. He will be succeeded by Cristiano Amon, who helps lead Qualcomm’s 5G efforts.

More than a decade after stepping down as Goldman Sachs’s C.E.O. to become Treasury secretary, Hank Paulson is rejoining his old industry by taking up a job with an environmental bent.

He will become executive chairman of TPG Rise Climate, a new fund run by the investment giant TPG that is focused on investing in — you guessed it — companies that combat climate change. It’s Mr. Paulson’s first foray into finance since stepping down from Treasury in 2009; until now, he has concentrated on his nonprofit institute.

“I’m in a hurry to make a difference,” Mr. Paulson said about why he was partnering with TPG rather than a start-up. He added that TPG’s track record of investments that focus on both profits and the environment was a draw: Other climate funds often have a philanthropic stance or are willing to accept lower returns, but, he said, “the market will not scale for concessionary or subsidized returns.”

What to expect at today’s vote certification

Later today, the House and Senate will meet to certify the Electoral College votes that won Joe Biden the presidency. Normally, this session is ceremonial and swift. But today will be different.

About a dozen Republican Senators may join about 100 House objectors. For each objection to a state’s slate of electors, which are opened in alphabetical order by the vice president and announced by lawmakers serving as “tellers,” the House and Senate split up and may debate for two hours before reconvening. But unless both chambers vote to sustain the objection, the Electoral College votes are counted as cast.

The challenges aren’t expected to succeed. Democrats have a majority in the House, and 24 Senate Republicans have explicitly said they will not object.

Vice President Mike Pence cannot take matters into his own hands, despite what President Trump says. It also appears that Mr. Pence doesn’t intend to, even if he could.

It will be an especially stressful day in D.C. Supporters of Mr. Trump began protesting yesterday. He plans to speak at a “Stop the Steal” rally shortly before Congress meets at 1 p.m. Eastern.

“The number of people living in poverty, globally, is estimated to rise by more than a hundred million by 2021 compared to pre-pandemic trends.”

— The World Bank, in a new report forecasting a subdued economic recovery after the pandemic

About the N.Y.S.E.’s U-turn on Chinese listings …

Wall Street is getting whiplash from trying to follow the New York Stock Exchange, after it announced that it would delist three Chinese telecom companies and then abruptly changed its mind. Officials in Washington are now pressuring the exchange to reverse that reversal.

It’s unclear what was behind the N.Y.S.E.’s change of heart. The exchange initially said it would delist the companies to comply with a Trump administration order barring Americans from investing in businesses with ties to China’s military. But the Big Board said its rethink had come after consulting with the Treasury Department.

President Trump has signaled that he’s in no mood for leniency. He signed an order yesterday banning transactions with eight China-based apps, including the payment services Alipay and WeChat Pay.

Another former Goldman Sachs exec-turned government official, Gary Cohn, has a new gig: vice chairman of IBM. It’s the highest-profile job yet landed by a former adviser to President Trump, and a test of corporate America’s willingness to embrace members of his administration just as many of them are hitting the job market.

The IBM job will bolster Mr. Cohn’s tech credentials, reflecting his longtime interest in the sector. At Goldman, he courted Silicon Valley moguls like Travis Kalanick and Elon Musk and touted his efforts to modernize financial markets through technology. Since ending his time as Mr. Trump’s top economic adviser, he has invested in a number of tech start-ups and launched a SPAC that indicated it is seeking to buy a tech company.

But Armonk, N.Y., where IBM is based, is a long way from Silicon Valley. There has long been speculation about whether former Trump officials would be welcome at high-profile tech companies. While Mr. Cohn and Treasury Secretary Steven Mnuchin — both veteran finance executives — are still held in esteem by many corporate leaders and likely to have fairly extensive options, it may be a different story for their more divisive colleagues.

As public health officials grapple with the rollout of coronavirus vaccinations, some people are doing what many had feared: using their money and connections to get inoculated ahead of others.

A high-end nursing home in Florida offered vaccines to major donors, The Washington Post reports. That may have defied national and state immunization guidelines.

The bigger picture: Governments are considering halving doses of the Moderna vaccine, and finding syringes that can extract more doses from vials, as part of urgent efforts to combat supply shortages.