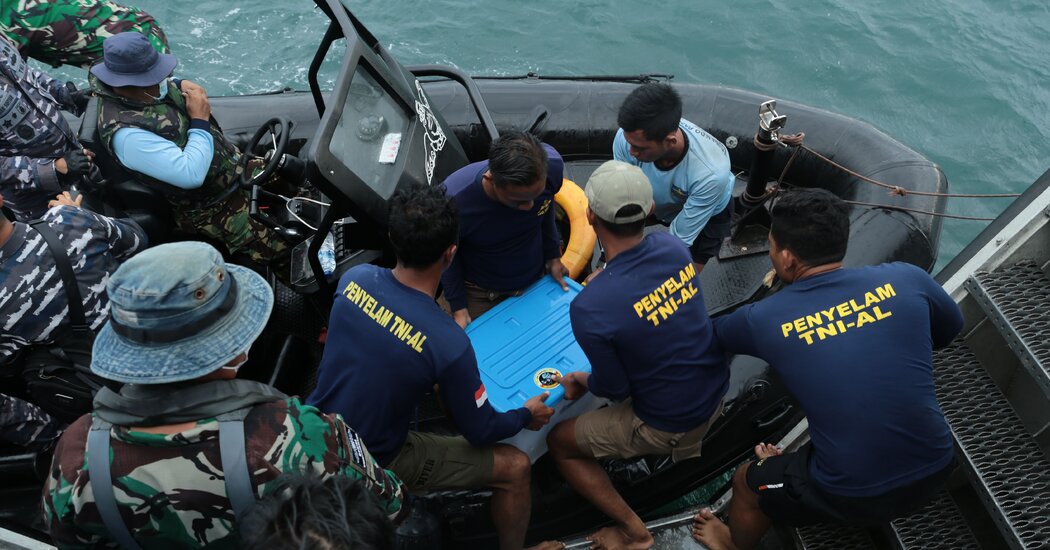 Indonesian Navy divers have recovered the flight data recorder from Sriwijaya Air Flight 182, which crashed into the Java Sea shortly after takeoff on Saturday with 62 people aboard, officials said Tuesday.

Remains of some of the victims were also brought ashore in dozens of body bags, officials said. So far, four victims have been identified. No survivors from the flight are expected to be found.

The quick recovery of the flight data recorder, sometimes known as a “black box” and one of two on the aircraft, will help officials understand why the 26-year-old Boeing 737-500 crashed just four minutes after takeoff from Jakarta, the capital. The plane was bound for Pontianak on the island of Borneo, a flight of about 90 minutes.

The divers retrieved the flight data recorder from the wreckage in about 75 feet of water between the small islands of Lancang and Laki, officials said.

The Boeing carried two data recorders at opposite ends of the plane: a flight data recorder in the tail of the plane, which can provide information about the jet’s mechanical operation during its brief flight; and a cockpit voice recorder that records the conversation between the pilot and co-pilot.

Investigators hope that analysis of the information found on both devices can provide a clear picture of what happened during the flight.

The plane plunged nearly 11,000 feet shortly after takeoff from Jakarta’s Soekarno-Hatta International Airport and the wreckage is spread over an area about 1,200 feet long and 300 feet wide, the authorities said.

The relatively compact size of the debris field is consistent with an aircraft that did not explode before hitting the water.

Each data recorder has an underwater acoustic beacon that emits a signal in the event of a crash to help searchers recover the recorders.

But in this case, the acoustic beacon broke lose from the cockpit voice recorder and was found separately, said the commander of the Indonesian National Armed Forces, Hadi Tjahjanto.

Divers are continuing to search for the recorder itself, he told reporters.

“We are certain the cockpit voice recorder will be found as well,” he said.

Sriwijaya Air released a statement saying that the aircraft had received a certificate of airworthiness from the Transportation Ministry of Transportation that was valid through Dec. 17, 2021.

A ministry spokeswoman, Adita Irawati, said the aircraft’s operating certificate had been extended in November.

“Sriwijaya Air has met the stipulated conditions,” she said.

The latest crash adds to a list of previous airline tragedies in Indonesia. Air Asia Flight 8501 crashed into the Java Sea off the coast of Borneo in December 2014. And in October 2018, Lion Air Flight 610 nose-dived into the Java Sea northeast of Jakarta, minutes after takeoff.

Read Your Way Through Cairo