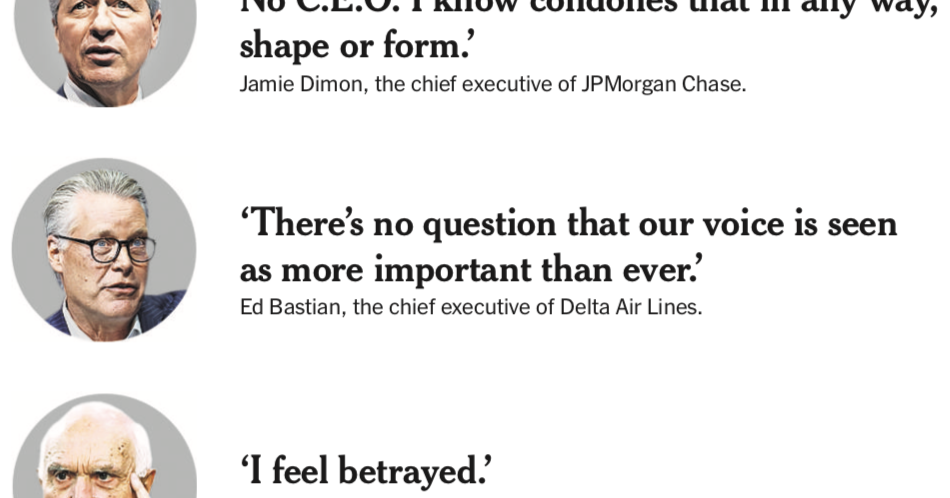 The fallout has been swift. After the president exhorted his supporters to march on the Capitol, chief executives used their strongest language to date to repudiate Mr. Trump, and some of his longtime allies have walked away. Ken Langone, the billionaire co-founder of Home Depot and an ardent supporter of the president, renounced Mr. Trump, telling CNBC, “I feel betrayed.”

Twitter, Facebook and YouTube have banned or suspended Mr. Trump’s accounts. Amazon, Apple and Google have cut ties with Parler, a messaging app popular among his supporters.

Charles Schwab, the brokerage firm founded by a Republican who supported Mr. Trump, said it would shut down its political action committee altogether. And many companies, along with the U.S. Chamber of Commerce, have sought to punish Mr. Trump’s supporters in Congress by depriving them of crucial funds.

“For those members of Congress that were involved in helping to incite the riot, and support the riot, there’s going to be consequences, no question about it,” said Ed Bastian, chief executive of Delta Air Lines.

That amounts to 147 members, or more than half of Republicans in Congress, including Senators Ted Cruz and Josh Hawley, and the House minority leader, Kevin McCarthy.

Corporate giving represents a small but important part of overall campaign contributions. Company PACs gave $91 million to members of the House of Representatives in the last election cycle, accounting for 8 percent of that chamber’s total funds raised, according to figures compiled by the Center for Responsive Politics. In the Senate, the figure was smaller, accounting for just 3 percent of donations.

Some companies said they were only temporarily stopping their corporate giving, but executives were sending a clear message that they were fed up with Washington.