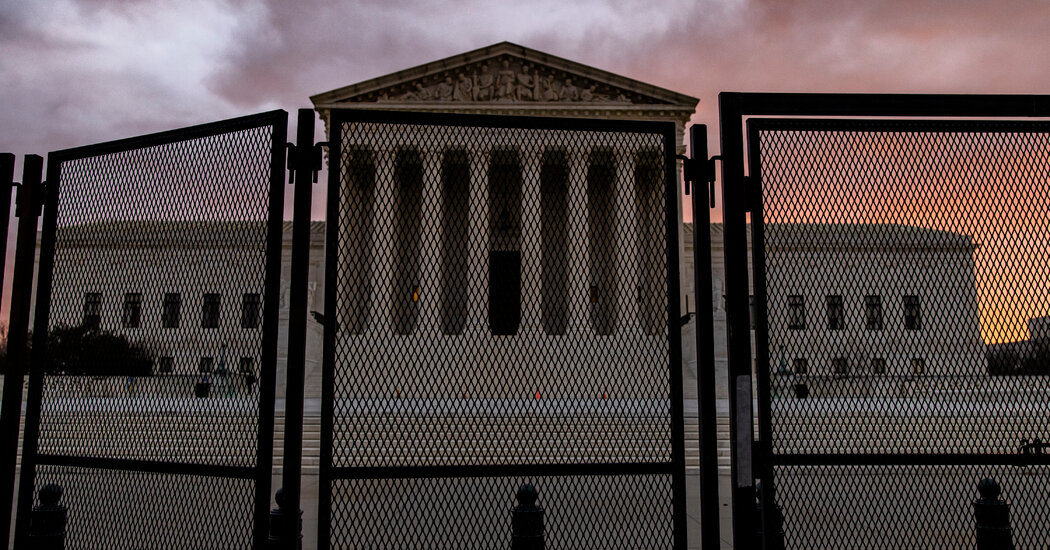 A new Supreme Court case is calling into question the sincerity of corporate America’s reckoning with political giving. Many companies and trade groups say they are re-evaluating political donations after the riot in the Capitol, demanding accountability for lawmakers who challenged the electoral count. But in a matter accepted for review by the high court a few days after the mayhem, some of those organizations had argued for a constitutional right to anonymous charitable donations, a position that would make accountability more difficult. (It’s known as “dark money.”)

The case “nominally involves a tiny technical question” about the tax disclosures of charities’ major donors in California, wrote Senator Sheldon Whitehouse, Democrat of Rhode Island, in the National Law Journal. But it “could lock in dark money influence as a constitutional right,” he added, and it comes as “the country faces a dark-money crisis as anonymous influence spreads malicious disinformation and corrupts and disrupts our politics.” More than 20 “friends of the court briefs” supporting donor anonymity were filed, including from business groups.

The petitioner says anonymity protects “dissident beliefs.” The Americans for Prosperity Foundation is a Koch-affiliated nonprofit, prohibited from political activities, that describes itself as a “charity that fund-raises nationwide and educates the public about free-market solutions.” It is related to Americans for Prosperity, a Koch-affiliated political advocacy group. In its petition to the court, the nonprofit notes that “the general public, including protesters, does not differentiate” between the two. The nonprofit unsuccessfully challenged California’s rule on disclosure. (The Supreme Court has not yet set a date for argument.)

Why worry? Anonymity obscures corporate influence in politics, which is already difficult to quantify. And some charitable giving goes to lobbyists, think tanks, nonprofits and players in the “marketplace of ideas,” argue the businesswoman Katherine Gehl and the Harvard professor Michael Porter in “The Politics Industry.” These groups engage in “shadow lobbying” on behalf of special interests, partly fueled by the untraceable money at the center of the court case.

The Paycheck Protection Program kicks into high gear. The federal small-business relief program reopens to all lenders today, after smaller banks were given access to the initiative last week. Companies can apply for a second loan, but there are tighter restrictions, including proof of at least a 25 percent decline in revenue any quarter last year.

Gary Gensler is named to lead the S.E.C. President-elect Joe Biden picked Mr. Gensler, a former Goldman Sachs trader and head of the Commodity Futures Trading Commission, to run the securities regulator. Rohit Chopra was chosen to lead the Consumer Financial Protection Bureau, where he previously served as assistant director. Both picks were supported by progressives.

A countdown to a wave of presidential pardons. President Trump is expected to bestow clemency on perhaps more than 100 people in his final hours in office, as would-be fixers collect huge fees from some hoping for consideration. Among those potentially in line for a pardon: Sholam Weiss, the recipient of a record white-collar prison sentence, and Allen Weisselberg, the Trump Organization’s C.F.O.

A squabble over lifted travel restrictions. Mr. Trump ordered an end to the ban on travelers coming from Europe and Brazil, and Biden officials quickly rejected the measure. In other pandemic news: a revelation that anti-vaccine organizations received federal bailout money.

The World Economic Forum outlines its virtual summit’s agenda. The theme of next week’s gathering of political and business leaders, usually held in Davos, Switzerland, is “A Crucial Year to Rebuild Trust.” It will feature President Xi Jinping of China, Prime Minister Narendra Modi of India and European leaders like Ursula von der Leyen, the European Commission president. The only U.S. official named as a speaker is Dr. Anthony Fauci.

How companies are preparing for the inauguration

As Washington girds itself for President-elect Joe Biden’s inauguration tomorrow, lawmakers have asked transportation and hospitality companies for help “identifying and preventing the ongoing and extreme threat of further violent attacks.” Here’s how companies are responding:

Airlines: American, Delta, Southwest and United have imposed bans on firearms in checked luggage. American has also suspended alcohol service, and Alaska Air has limited the number of tickets available for flights to and from Washington.

Hotels and hospitality: Airbnb has canceled reservations for this week. Expedia’s Vrbo is still accepting bookings, but yesterday rolled out new procedures that include screening guests against federal threat lists. A spokesman for Hyatt said the chain had increased security personnel and was limiting hotel access to registered guests. A representative for Hilton declined to discuss security measures but said it was “well-informed and mindful of current events.”

Other travel companies: To “avoid any disruptions” in Washington, the bus operator Vamoose canceled service for today, tomorrow and Thursday. And the electric scooter companies Lime, Lyft, Spin and Helbiz are disabling service downtown.

After Wednesday’s presidential inauguration, Joe Biden is expected to issue dozens of executive orders on his first full day in office, plus legislative proposals for a $1.9 trillion stimulus bill, changes to immigration laws and other priorities of his administration.

The Senate confirmation hearing of Janet Yellen as Treasury secretary begins today, with a focus on reviving the pandemic-stricken economy, recovering lost jobs and regulating Wall Street. On economic stimulus, “right now, with interest rates at historic lows, the smartest thing we can do is act big,” Ms. Yellen is set to say in her opening remarks.

Corporate earnings season is ramping up, with more of America’s big banks releasing fourth-quarter earnings. Bank of America and Goldman Sachs report today, while Morgan Stanley steps up on Wednesday.

Netflix also reports its latest earnings today, followed by Procter & Gamble and United Airlines on Wednesday, and IBM and Intel on Thursday.

Man in the middle

The Senate resumes today, with a new power dynamic in the session ahead. Evenly split between Democrats and Republicans, with the vice president holding the decisive vote, centrists on both sides of the aisle are expected to exert increased sway, perhaps none more so than Joe Manchin of West Virginia, known as “the most conservative Democrat.”

A coal-country businessman critical to the Biden climate agenda. Mr. Manchin is the grandson of a mining town grocer and worked in the family business before getting into politics. In a conservative-leaning state, he became governor in 2005 and was elected three times as U.S. senator, pitching voters on bipartisanship.

Energy is his thing. West Virginia is the second-largest coal producer in the nation and is wrestling with the inevitability of renewable energy, a shift that Mr. Manchin has his eye on. As the ranking member of the Senate’s energy committee, he advanced an innovation bill last year with then-committee chair Lisa Murkowski, Republican of Alaska, that focused on jobs and technology. The bill was lauded by businesses and environmentalists, but did not survive. Mr. Manchin is now set to lead the committee.

“Manchin is no ideologue,” notes Inside Climate News, but his new power could be a “political reality check” on environmental legislation. Still, aspects of the Biden climate agenda likely appeal to him. A promise to support 250,000 new jobs fixing and maintaining abandoned mines and oil and gas wells, a move reportedly designed to draw moderates, seems right up Mr. Manchin’s alley.