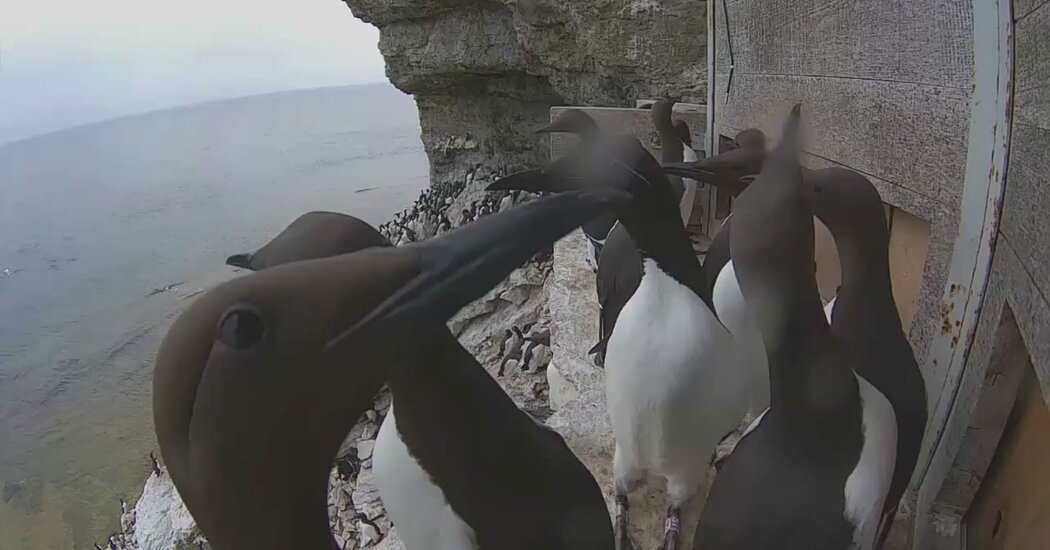 When tourists come to Stora Karlso, a limestone-ledged nature reserve off the coast of Sweden, they keep a respectful distance from the many seabirds that call the island home. Like most visitors to wild places, they aim to leave only footprints and take only photos — to slip between the strands of the web of life they’ve come to see.

No such luck. In a paper published this month in Biological Conservation, researchers detail how the sudden absence of tourists on Stora Karlso during the pandemic set off a surprising chain reaction that wreaked havoc on the island’s colony of common murres, diminishing its population of newborn birds.

Stora Karlso became a nature reserve in the 1880s, after thousands of years of human occupation. Its common murre population — which once was diminished to fewer than 100 because of hunting and egg foraging — is now around 60,000 birds, and is the largest in the Baltic Sea.

Jonas Hentati-Sundberg, a researcher at the Swedish University of Agricultural Sciences and the lead author of the new paper, has been studying the colony for 19 years. When he and his team started planning the 2020 research season, they expected the pandemic would present logistical hurdles: Without visitors, fewer boats would be operating, and the island’s restaurant would be closed.

“These were our main thoughts,” he said.

However, from their first trips of the year, in late April, they noticed that the murres “were flying off all the time,” with individuals sometimes disappearing for days. That was a change in behavior, he said, and a sign that something was making the birds more nervous than usual.

The island’s white-tailed eagles also changed their behavior. Normally, seven or eight eagles will spend the winter there, and then head out as visiting season picks up in the spring, Dr. Hentati-Sundberg said.

But without the influx of tourists, they stuck around, and more eagles joined them — sometimes dozens at a time. “They will gather in places where there is a lot of food and little disturbance from people,” he said. “This year, this was their hot spot.”

Further observation clarified the new dynamics: The eagles, freed from the bothersome presence of humans, were themselves bothering the murres.

Although eagles rarely prey on murres, the seabirds fear them, and scatter at the slightest flyby. In one video from May, a distant, broad-winged figure sends hundreds of murres hooting and cascading off their ledges, like theatergoers rushing out of balconies after the curtain call.

This happened over and over. From May 1 to June 4, birds in one part of the colony were displaced from their nests by eagles for an average of 602 minutes per day — far longer than 2019’s average of 72 minutes.

In addition to time, the murre colony lost eggs, kicking them off ridges during panicked takeoffs, or leaving them vulnerable to hungry gulls and crows. Twenty-six percent fewer eggs hatched in 2020 than was typical for the rest of the decade.

Researchers across the world have taken advantage of pandemic-related travel restrictions to study the effects of sudden human absence on the natural world, an event some have called the “anthropause.” A finding like this, where a tourism stoppage has a domino-style effect on multiple species, is “fascinating,” said Nicola Koper, a professor of ecology at the University of Manitoba who was not involved in the research. “This shows just how impactful our changes in travel have been on entire ecosystems.”

For Dr. Hentati-Sundberg, a summer on a changed Stora Karlso emphasized how tightly we can be entwined with other species — even when we see ourselves as mere observers — and that “understanding our relationships with nature and embracing the idea of ourselves as a part of the picture is a more fruitful strategy” for conservation decisions.

“Stepping back is not an option,” he said. “We are out there.”

Read Your Way Through Cairo