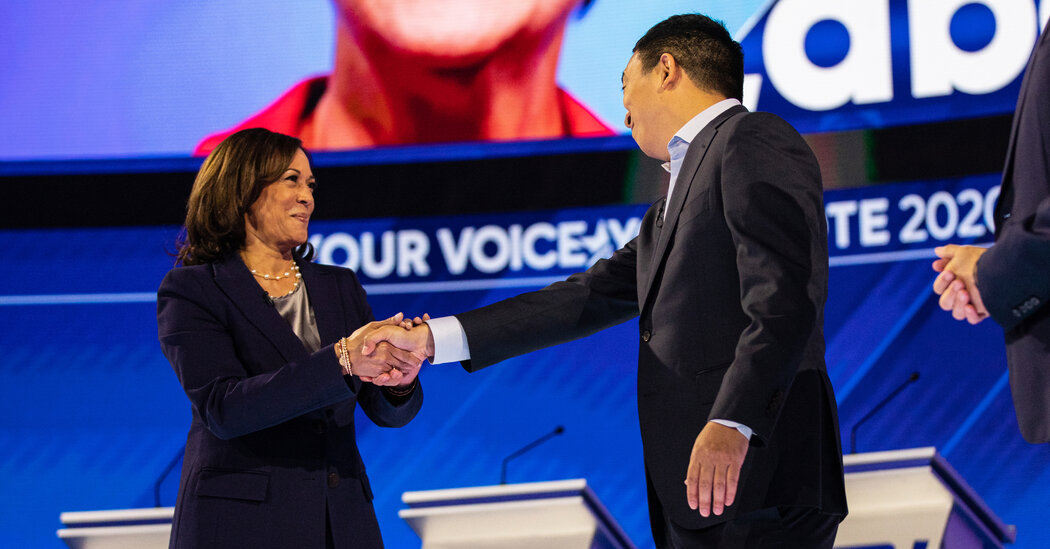 In many tight political races, candidates battle over not just what they know, but whom they know. In the New York City mayor’s race, the most popular person to know isn’t even a New Yorker.

Maya D. Wiley, another mayoral candidate, has a picture featuring that vice president — Kamala Harris of California — splashed across the top of her Twitter page.

As a new administration takes over in Washington, there are signs of fresh battle lines in New York’s mayoral race, centered on connections to federal power.

Political candidates often claim ties to major party figures in an effort to energize their bases, and that may be especially true with regard to Ms. Harris, the first woman and woman of color to serve as the country’s vice president.

Yet this year, in a contest that may be defined by promises to stabilize an economically imperiled city, several prominent candidates are also competing over who is best equipped to capture Washington’s attention — and its assistance.

“Having the bragging rights to relationships with these folks is appealing to voters,” said Jay Jacobs, the chairman of New York State’s Democratic Party. “It probably allows them to suggest that maybe they’ll be able to get additional help for the city if they become mayor.”

New York already has vigorous champions for federal aid, starting with the new Senate majority leader, Chuck Schumer, who is known to be attentive to his home state’s needs. And for mayors, the most urgent and fraught relationship to manage is often the one with Gov. Andrew M. Cuomo, who has vast control over city operations and has his own dealings with Washington.

But after New York’s rough relationship with the Trump administration, many mayoral candidates agree that the city needs as many strong ties as possible to the new Washington to help navigate issues like housing, transportation and pandemic relief.

Yet there are sharp distinctions in the ways the candidates approach discussing Washington.

Some of the leading contenders — like Scott M. Stringer, the city’s comptroller, and Eric Adams, the Brooklyn borough president — are vocal about the need for more federal relief, and they appear to be betting that the next mayor of New York will get through to Washington regardless of previous relationships.

“It’s a powerful argument to remind people in power time and time again in Washington that New York City continues to be the epicenter of the national economy,” said Mr. Stringer, who as comptroller laid out New York’s “most urgent” economic needs in a recent letter to President Biden, Mr. Schumer and Speaker Nancy Pelosi of California. “The quicker we bring back New York City, the better it will be for everybody.”

For candidates with fewer established ties to city politics, national name-dropping can be part of a broader effort to explain the less conventional ways they would fight for New York, or simply a tactic aimed at standing out through association.

It is an approach that may attract attention from donors and endorsement gatekeepers, though many New York political experts are skeptical that such appeals move votes.

Embracing the new administration may not be viewed as a particular asset in the most liberal corners of New York, where the White House is sure to be seen as too moderate. And strategists warn that the impact that Washington has on New York can be an abstract concept for voters grappling with more tangible challenges.

“If you’re an insider, it obviously plays a larger factor,” the Queens borough president, Donovan Richards Jr., said. “For the person on the food line who’s disconnected from government, they don’t necessarily care about your relationship to Washington, D.C. They care about you being able to put some food on their plate.”

Mr. Yang is trying to address the latter concern with a broad suite of policies as he seeks to emerge as the anti-poverty candidate. But Mr. Yang, a former presidential contender and political surrogate, is also emphasizing national relationships — even as he faces scrutiny over his connections to the city in which he has never voted for mayor.

“My ties are strong with our partners in the White House and the Capitol; I have a lot of their phone numbers,” he said last week, adding that Senator Jon Ossoff of Georgia had recently called him (though newly elected officials often make many phone calls to thank supporters).

Calling Mr. Biden, Ms. Harris and Pete Buttigieg, the transportation secretary nominee, “friends of mine,” Mr. Yang added, “These relationships will pay dividends for our city when we want to get things done.”

He also posted pictures of himself with Mr. Biden, Ms. Harris and Senators Bernie Sanders of Vermont and Cory Booker of New Jersey. (Mr. Booker, declining to name the mayoral candidates he knew best, said he did not expect to endorse in the race because “I have so many friends that are running.”)

The candidate with the deepest federal management experience is Shaun Donovan, who was a housing secretary under former President Barack Obama, and Mr. Donovan makes no secret of it. The biography on his campaign website opens with the promise to work with Mr. Biden, “ensuring that New York City’s voice is heard in the White House.”

Mr. Donovan said in an interview that his Washington relationships positioned him to see fresh opportunities for collaboration.

“The question is, how deep are those relationships, how much trust do you have in the ability not just to call them on the phone, but to actually have worked side by side with them in moments of crisis?” he said. “No one has the depth and breadth of relationships that I do.”

Despite those high-profile contacts, Mr. Donovan failed to meet the thresholds to qualify for the city’s matching-funds program, according to numbers released last week.

Then there is Mr. McGuire, a longtime Wall Street executive, who has been a major Democratic donor himself and was a supporter of Ms. Harris before she ran for president.

Mr. McGuire does not mention her at every turn, but he does have ties to her 2020 presidential primary infrastructure: The national finance chairman of her campaign, Jonathan Henes, is now a finance co-chair of his campaign, and there is additional overlap among prominent donors and on the finance team.

Mr. McGuire and his wife, Crystal McCrary McGuire, also have personal relationships with Ms. Harris, according to a person who has worked for both Mr. McGuire and Ms. Harris. The person recalled, for instance, that after Ms. Harris gave a book talk at the 92nd Street Y in Manhattan several years ago, she and her husband dined on cartons of Chinese takeout at the McGuires’ home.

That doesn’t mean a Harris endorsement is imminent for Mr. McGuire or anyone else. A Harris aide said her team had been focused on the inauguration and on managing the coronavirus crisis. Others who have worked with her are skeptical that she would wade into a crowded mayoral primary.

But the relationship is part of Mr. McGuire’s pitch that he would activate his sprawling network on behalf of the city. Mr. McGuire has publicly cited his ties with Ms. Harris and his connections with Washington decision makers.

In an interview, she detailed her own experiences navigating Washington, including testifying before Congress and meeting key officials across federal agencies, and described opportunities for the next mayor to work with an increasingly powerful New York delegation. And Ms. Wiley, who is Black and hopes to be the first woman to serve as the city’s mayor, also noted the historic nature of Ms. Harris’s ascension to the vice presidency.

Female voters, she said, are “very energized by this White House, and by what it represents, not just symbolically but practically.”

“The national and local are deeply connected for folks because we do need help from Washington,” said Ms. Wiley, a former MSNBC analyst who has worked with Ms. Harris’s sister, who added that she had traded the occasional text with Ms. Harris.

Then there are the veteran New York politicians like Mr. Stringer and Mr. Adams who lack much of a national platform but do have deep local relationships.

Given New York’s stature, some officials say, that should be enough — a stance adopted by Kathryn Garcia, the city’s former sanitation commissioner who is also running for mayor.

“You are still the mayor of the premier city of the United States,” she said. “They’re going to take your call.”

The former Representative Charles Rangel, the onetime dean of the New York House delegation, suggested that the mayoral candidates should keep fully focused on their own city.

“I refuse to say anything that could be misinterpreted as not being positive about the power of the vice president of the United States,” he said. “But I’ll be goddamned if I can ever remember going to the vice president for any help for my city.”