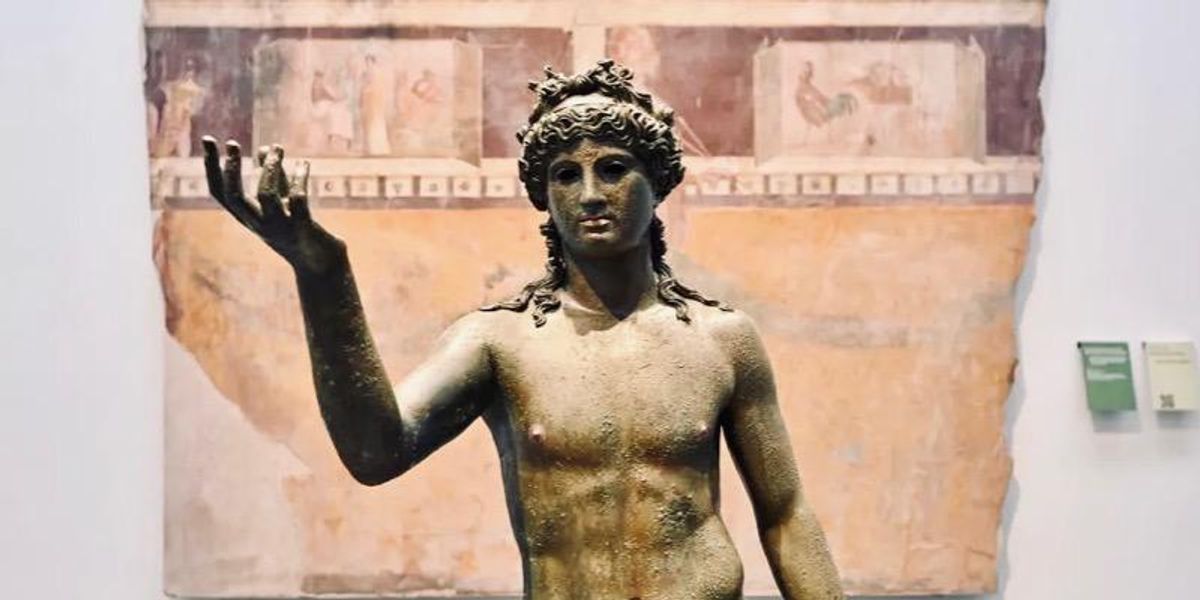 Decades worth of archaeological finds went on public display Monday in Pompeii, shedding further light on the ancient Roman city destroyed by a volcanic eruption nearly 2,000 years ago.

One is a sorcerer’s toolbox including dozens of amulets, rings, statuettes and other good luck charms made of ivory, bronze, glazed ceramics and amber — that were clearly not enough to protect the city from doom.

“It’s one of the most peculiar things we found during our excavations: amulets we found in a box in a house… which seem to belong to a woman — or a man, perhaps — who used magic,” said Massimo Osanna, the director of the Pompeii archaeological park near Naples in southern Italy.

He was speaking at the inauguration of the Antiquarium, a refurbished museum housing bronze statues, frescoes, gold and silver jewels as well as the haunting casts of those killed when Vesuvius erupted in October 79 AD.

“You have some of the most important objects uncovered here since the 19th century. So really, this Antiquarium takes you through the centuries of Pompeii’s history, up until the fateful day of the eruption,” Osanna told AFP.

The room that chronicles the last days of the city is “the most poignant part (of the exhibition),” the Italian archaeologist added.

The plaster casts of the dead, including small children, were made by filling voids left by their bodies in the calcified layers of ash.

Osanna has headed the Pompeii park since 2014 and overseen a major conservation project, mostly funded by the European Union, which revitalised a UNESCO world heritage site formerly plagued by neglect and building collapses.

Last month, archaeologists announced the unique discovery of a thermopolium, a fast-food bar.

It had surviving polychrome decorations and traces of food and wine that offered an unprecedented glimpse of the snacking habits of the ancient Romans.

A team found duck bone fragments as well as the remains of pigs, goats, fish and snails in earthenware pots, one of which “gave off a very strong stench of wine”, archaeologist Teresa Virtuoso said.

The frescoes decorating the site included electioneering slogans and graffiti, scribbled over the image of a dog, in which a man — presumed to be a former slave — was accused of practising sex with dogs.

In 2019, Pompeii had more than 3.9 million visitors, making it Italy’s third most popular tourist destination after the Colosseum and Roman forum complex and the Uffizi Galleries in Florence.

But, like most other cultural sites in Italy, it has been mostly shut in recent months due to the coronavirus pandemic.

It reopened on January 18 but has admitted fewer than 100 visitors per day, compared to a pre-Covid-19 average of around 8,000.

“We’ve lost 80 percent of our visitors, and this also means 80 percent of our ticket revenues,” Osanna said, adding that the site had to rely on generous subsidies from the Italian culture ministry to keep going.

On Monday, the vast archaeological park looked deserted, save for the journalists who came for the museum opening and the usual presence of archaeologists, restorers, guardians and unemployed tourist guides.

Its current state is surreal, but Osanna said it was nevertheless a great time to visit.

“It is almost as if you can see Pompeii’s inner soul, its spirit,” he said.

“This is an abandoned city, and seeing it empty of tourists perhaps makes you think harder about the dreadful catastrophe that forever ended life here and reduced to silence a place that was bustling.”