The United Kingdom passed the grim milestone of 100,000 COVID-19 deaths on Tuesday, only the fifth country to record a six-figure death toll, and by far the smallest.

With the entire country still under a national lockdown to slow the spread of the virus, Prime Minister Boris Johnson said Tuesday it was “hard to compute the sorrow” of the statistic in a national address, and offered his “deepest condolences to anyone who has lost a loved one.”

Half of the more than 100,000 deaths in the U.K. have come since November, when the virus, which reached low levels in the population over the summer, began spreading with renewed speed. In December, scientists identified a new variant of the virus in the U.K. that was up to 70% more transmissible. On Jan. 22, Johnson said that variant could be up to 30% more deadly, too.

The U.K.’s death toll is lower than the U.S.’s 425,000, but its population is only one-fifth of the size of America’s and its per capita death rate is higher by nearly 13%, according to data from Johns Hopkins University. The only countries in the world that are worse affected than the U.K. in terms of per capita death rate are the small European nations of San Marino, Belgium and Slovenia.

Prime Minister Johnson said that the U.K. government “did everything we could” to control the spread of the virus, but the opposition Labour Party and public health experts say that his government is responsible for a list of avoidable failures.

The opposition Labour Party said the government had made “monumental mistakes” in its handling of the pandemic. “I just don’t believe that the government did do everything [they] could,” Labour’s health spokesman, Jonathan Ashworth, told the BBC on Wednesday. 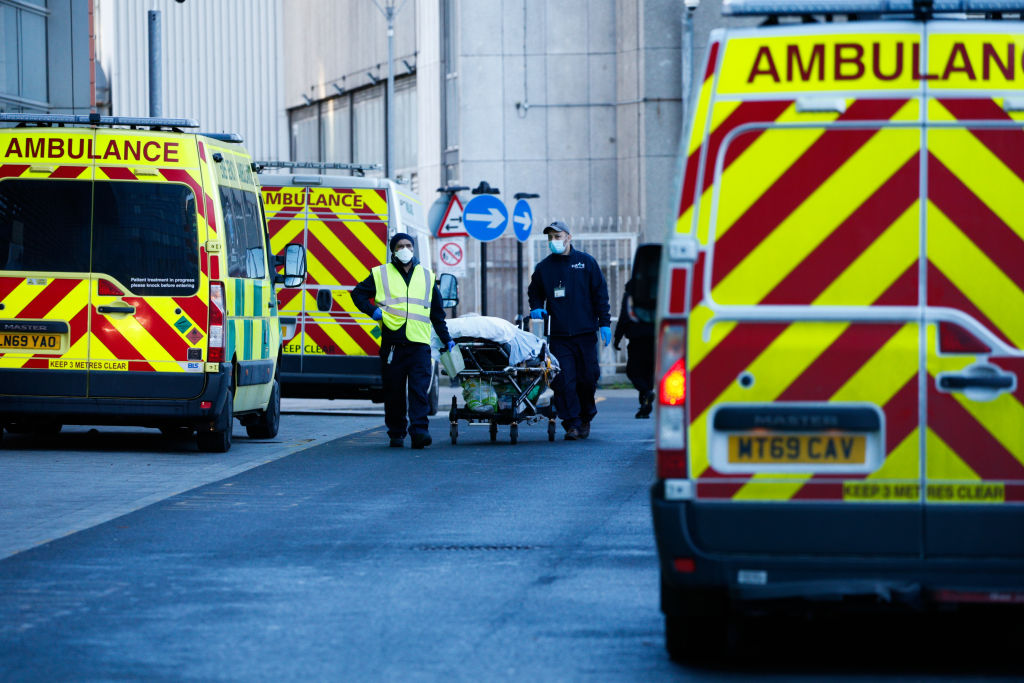 Medical staff wheel a patient on a stretcher to an ambulance outside the emergency department of the Royal London Hospital in London, England, on January 25, 2021.

Why is the U.K.’s death toll so high?

The U.K. has had two main surges of COVID-19 infections. At one stage at the beginning of the pandemic it was the worst-hit country in Europe in terms of infections and deaths; now, at the peak of the second wave, it again has more total cases and deaths than any other European country.

Others blame the government itself. “It all comes down to failed leadership,” says John Ashton, a former regional director of public health in England, who points out that Britons make up a greater percentage of the world’s dead from COVID-19 than they did in the flu pandemic of 1918-19. “We’ve got modern medicine, and we’ve actually done worse than we did in 1918,” he says. “It looks as though we’re in a worse position than America.”

Read more: Coronavirus Hit the U.K. Harder Than Any Other European Country. Here’s What Went Wrong

Ashton points to a list of factors including historic under-investment in public health. But chief among the reasons for the U.K. being hit so hard is the government’s immediate response, he says. The government’s public health messaging was inconsistent, it lost the public’s trust through a series of scandals and policy U-turns, and more recently, it failed to take decisive measures during the Christmas period.

In December, the government announced — and then partially backtracked on — plans to relax rules to allow families to meet for five days to celebrate the Christmas holiday, even as the new variant was spreading around the country. “In the third week of December, Johnson was still banging on about having five days of Christmas, against all advice,” says Ashton. “We were in a worse position with the new variant than we needed to be. We’ve been reaping the reward, if you will, about being slack in the lead-up to Christmas.”

Is the U.K.’s lockdown working?

On Jan. 4, Prime Minister Johnson announced the U.K. would have to go into another national lockdown because of the surge in infections across the country, driven by the more infectious new variant. Schools are closed, and most non-essential businesses and workplaces are out of bounds. People are only allowed to leave their homes for a limited list of reasons including exercise and buying food.

Read more: A New, More Contagious COVID-19 Strain Has Been Reported in the U.K. Is It Headed for the U.S.?

The data suggest it is working. Three weeks into that lockdown, the number of new cases per day has dropped from a peak of more than 81,000 on Dec. 29 to 39,000 on Jan. 19, the most recent day for which complete figures are available.

How much worse could the U.K.’s COVID situation get?

There are signs that the worst has passed. According to the U.K. government’s COVID-19 data, the average daily death toll is leveling off at around 1,000 per day, and the number of new daily cases is now on a downward trend, from a peak at the turn of the new year.

Another reason for optimism is the U.K.’s advanced vaccine rollout, which the government has regularly pointed to as a source for hope amid a long, dark, winter lockdown.

Britain has administered more vaccines per capita than any other country in the world except for Israel and the United Arab Emirates, according to Oxford University’s Our World in Data project. More than 6.8 million people in the U.K. (some 10% of the population) have now received the first dose of a COVID-19 vaccine, according to government figures.

“We are now rolling out the biggest vaccination program in our history,” said Johnson on Jan. 4. “By the middle of February, if things go well and with a fair wind in our sails, we expect to have offered the first vaccine dose to everyone in the four top priority groups.” That includes all individuals aged 70 and over, frontline healthcare workers and nursing home residents and staff.

But experts caution against the British government placing all its hope in vaccines alone. Ashton, the former regional public health director, says that the risk of the virus evolving faster than vaccine research means that ground-level public health investment is needed too, something that successive Conservative governments have neglected in the U.K.

“We have to be very careful,” Ashton says. “You can’t put too much weight on vaccines saving us in this. You’ve got to simultaneously strengthen your public health, because it requires the classic stuff of rooting out outbreaks through local knowledge and local action. This virus is going to be with us for the foreseeable future, and it’ll keep evolving, we’ll keep getting new strains. We can’t just think science will save us. We have to do the public health stuff.”

Write to Billy Perrigo at billy.perrigo@time.com.