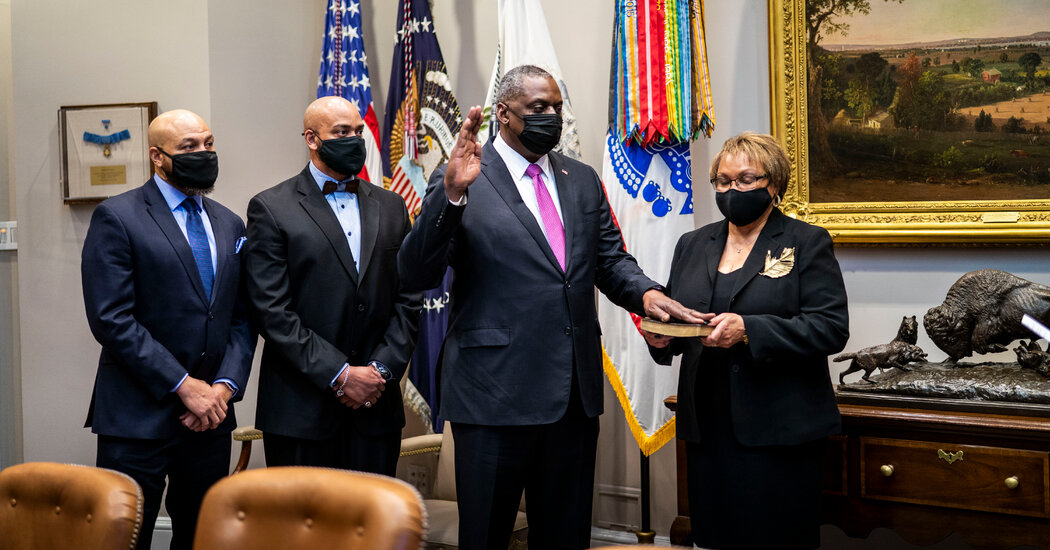 WASHINGTON — After years of failure to curb the scourge of sexual assault in the military, Lloyd J. Austin III, the new secretary of defense, is open to considering significant revisions to how those crimes are prosecuted, a potential sea change that generations of commanders have resisted.

Overhauling the way the military handles sexual assault cases — by taking them outside the military chain of command and assigning them to military prosecutors with no connection to the accused — would need approval by Congress, where some legislators have long pushed for such a system.

President Biden has been a vocal proponent of these changes, even as general after general has gone to Capitol Hill to argue against them over the last decade. “I had a real run-in with one of the members of the Joint Chiefs in the cabinet room on the issue,” Mr. Biden said last year at a fund-raiser.

Mr. Austin’s first act as secretary was to order a review of how the Pentagon has been handling sexual assault cases. In December, he met remotely with survivors of assault in the military and was disturbed and moved by their stories, an official said.

He has also read a recent report about the culture of Fort Hood, the large army base in Texas where a female soldier was murdered last year. An Army report in the wake of her death found a “permissive environment for sexual assault and sexual harassment,” and numerous leaders on the base were relieved of their duties.

Mr. Austin, a retired four-star Army general, is also being pushed by Congress. Senators repeatedly asked him how he planned to handle the problems of sexual harassment and assault in the military during his confirmation hearing this month.

If Mr. Austin were to embrace these changes, he would be the first secretary to do so, a major shift in position for the department.

“Every defense secretary since Dick Cheney has come up here and said nice things and then the fight behind the scenes was to protect the status quo,” said Senator Kirsten Gillibrand, the New York Democrat who has spent years pushing legislation on the issue.

In 2019, the Defense Department found, there were 7,825 sexual assault reports involving service members as victims, a 3 percent increase over 2018. Between 2018 and 2019, the conviction rate for cases was unchanged; seven percent of cases that the command took action on resulted in convictions, the lowest rates since the department began reporting in 2010.

Proponents of revising the law — such as advocates for sexual assault survivors and scores of members of Congress — are eagerly watching to see how Mr. Austin responds to inevitable pressure within the military to avoid major changes to its justice system.

Just as the Clinton-era “don’t ask, don’t tell” policy that prevented openly gay people from serving was only repealed after military leaders changed their positions, Mr. Austin’s advocacy could also change the dynamic on sexual assault. In 2010, Adm. Mike Mullen’s decision to became the first sitting chairman of the Joint Chiefs of Staff to support a repeal of “don’t ask, don’t tell” helped prod Congress to move forward on the issue.

Mr. Austin, the second retired general in five years to receive a waiver from a law barring those who have been out of active-duty military service for less than seven years to serve as defense secretary, has been eager to convince lawmakers that he will lead with respect for the tradition of civilian control of the military. Mr. Biden has been eager for that, too.

“This could be a welcome opportunity to reassure people who were skeptical as to whether, as a matter of public policy, a person who served 41 years in uniform in an environment that thinks of itself as a separate society is really providing civilian oversight,” said Eugene R. Fidell, a senior research scholar at Yale Law School and a military justice expert.

While many industries, from Hollywood to journalism to restaurants, have been roiled by the #MeToo movement of the last few years, women in the military received little national attention until last summer, after Army Specialist Vanessa Guillen was killed by another soldier at Fort Hood.

Although reports that she had been sexually harassed by her killer — who died by suicide — were never confirmed, the case set off a far broader look into the problems of harassment and assault of both men and women in the armed forces.

“Sometimes a thing that logically and factually has no nexis to some issue becomes the focus because it is impossible to disentangle it from those other issues,” Mr. Fidell said.

Congress and defense secretaries have debated how to deal with the issue for decades, as prominent cases have periodically elevated it, from the 1992 assault of a Navy lieutenant at the annual Tailhook Symposium in Las Vegas to the videotaping of cadets in the bathroom at West Point in 2013 to numerous complaints of harassment, assault and rape from bases around the world.

Over the years, Congress has taken some steps to bring the military justice system more in line with the civilian one. They include preventing lengthy pretrial dispositions of accusers that were intended to pick apart their credibility, making it harder for appeals courts to overturn sexual assault convictions and ensuring sexual assault survivors across the military can report their assaults without fear that they will be punished as a result.

“All of these things help make things better in survivors’ lives,” Ms. Gillibrand said. “But none of them get rapists and recidivists in jail.”

Ms. Gillibrand has introduced legislation that would give military prosecutors, rather than commanders, the power to decide which sexual assault cases to try.

Proponents of that shift say it would increase the number of people who report crimes without fear of retaliation, a central impediment to trials and convictions. Opponents, including past Senate Armed Services Committee chairmen from both parties and military leaders, have argued that it would undermine the tradition of the military prosecuting its own, which is cited as important to maintaining order and discipline.

When Ms. Gillibrand first proposed such a bill in 2013, the chairman of the Joint Chiefs of Staff at the time, Gen. Martin E. Dempsey, said, “Reducing command responsibility could adversely affect the ability of the commander to enforce professional standards and ultimately, to accomplish the mission.”

Senator John McCain, Republican of Arizona, who died in 2018, once said he was so appalled by the assault problem that he could not recommend a friend’s daughter join the armed forces. Yet Mr. McCain, a retired Navy pilot who endured years as a prisoner of war in Vietnam, vehemently opposed Ms. Gillibrand’s proposal.

President Barack Obama expressed sympathy for Ms. Gillibrand’s legislation, but was reluctant to go against the generals on this issue. President Donald J. Trump blamed sexual assault in the military — which affects more men than women — on the integration of women into combat roles.

“Biden has spoken out more forcefully on this issue than any other president,” said Col. Don Christensen, president of Protect Our Defenders, which advocates on behalf of assault victims, and who is retired from the Air Force. “Obama would not take the generals and admirals on. I am certain Austin having been a commander himself is in a divided-loyalty situation.”

Earlier this year, Congress approved a measure to create a pilot Office of the Chief Prosecutor at the service academies for such incidents, pressed by female veterans in the House.

“At the end of the day, this takes presidential leadership,” Ms. Gillibrand said. “We should have a criminal justice system worthy of the sacrifices made by those who serve.”