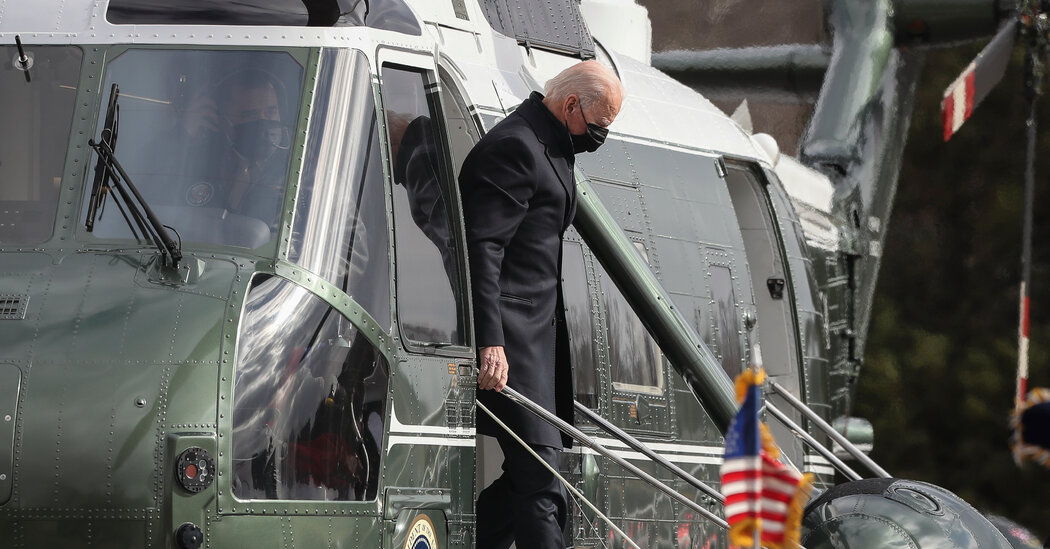 WASHINGTON — Among President Biden’s most specific foreign policy promises was a pledge to convene a global democracy summit during his first year in office. The gathering would be intended to take a public stand against the authoritarian and populist tides that rose during the presidency of Donald J. Trump and, as Mr. Biden and his advisers see it, threaten to swamp Western political values.

In the weeks since Mr. Biden’s election, however, America’s own democracy has been staggering. This month, a mob of Trump supporters stormed the Capitol and disrupted the hallowed peaceful transfer of power. Next week, the Senate will begin its second presidential impeachment trial of Mr. Trump in a year. Republicans in Congress are poised to impose legislative gridlock by obstructing Mr. Biden’s every move.

The sense of a dysfunctional, if not entirely broken, democratic system has foreign rivals crowing — and suggesting that the United States has no business lecturing other nations.

“America no longer charts the course and so has lost all right to set it,” Konstantin Kosachev, the chairman of the Foreign Affairs Committee in the upper house of Russia’s Parliament, wrote on Facebook after the Capitol riot. “And, even more so, to impose it on others.”

Americans might “pride themselves on their democracy and freedom,” Hua Chunying, a spokeswoman for China’s foreign ministry, recently told reporters. But after witnessing so much political chaos, she added, “deep down they may hope they could lead a life as the Chinese do.”

Administration officials say that neither opportunistic commentary from foreign rivals nor recent expressions of good-faith skepticism from foreign policy analysts at home has tempered the plan Mr. Biden promised as a candidate: convening a “summit for democracy” where like-minded leaders could discuss ways to strengthen their own systems internally and protect them from threats like corruption, election security, disinformation and the authoritarian model that has gripped China and Russia and seeped into nations like Turkey and Brazil.

Writing in Foreign Affairs last spring, Mr. Biden said the event would be “to renew the spirit and shared purpose of the nations of the free world. It will bring together the world’s democracies to strengthen our democratic institutions, honestly confront nations that are backsliding and forge a common agenda.”

A person familiar with the summit planning, which has been underway since before the election, said Mr. Biden was undeterred by the recent political strife in the United States and was likely to act as the host at an event with fellow heads of state, although details like the timing and location have not been determined. Others familiar with the process said they expected an event near the end of the year. A White House official did not respond to a request for comment.

In Washington, however, a debate over the idea has broken out among former United States government officials and academics. It narrowly concerns plans for the summit but involves larger anxieties about the country’s role as a global leader in the post-Trump era.

The immediate question is whether the political crisis is a reason to postpone the plan for the summit and reassess the push to promote the democratic model around the world, as some argue.

“The United States has lost credibility; there’s no question about that,” said James Goldgeier, a professor of international relations at American University and a former National Security Council aide in the Clinton administration. In a recent essay for Foreign Affairs, he argued that Mr. Biden should instead hold a democracy summit at home — one focused on “injustice and inequality” in the United States, including issues like voting rights and disinformation.

“If you have total gridlock on Capitol Hill and you don’t have the ability to get things done to improve people’s lives, you’re not going to command a lot of moral authority,” Mr. Goldgeier added.

“How can the United States spread democracy or act as an example for others if it barely has a functioning democracy at home?” Emma Ashford, a senior fellow at the Atlantic Council, wrote in Foreign Policy this month. “Washington’s foreign-policy elites remain committed to the preservation of a three-decade foreign policy aimed at reshaping the world in America’s image. They are far too blasé about what that image has become in 2020.”

Biden administration officials say this criticism creates a false choice between restoring the country’s strength at home and its standing abroad.

During public remarks in August, Jake Sullivan, who is now Mr. Biden’s national security adviser, spoke of “the intersection between domestic policy and foreign policy, not merely as some abstract notion but as core to our grand strategy.”

“Any effective strategy for American engagement in the world has to start with making those deep investments in the strength of our own democracy and democratic institutions,” Mr. Sullivan said, “and in progress on issues like dealing with systemic racism.”

With that work underway, advocates of holding a summit say that it would be an important moment for the world after four years in which Mr. Trump praised strongman leaders like President Vladimir V. Putin of Russia, Kim Jong-un of North Korea and Crown Prince Mohammed bin Salman of Saudi Arabia, validating their arguments that stability and firm central control are more important than civil society and the popular will.

“I feel very strongly that the events of the last few weeks — and years — make it necessary” to hold a summit, said Representative Tom Malinowski, Democrat of New Jersey and the former top State Department official for human rights and democracy in the Obama administration.

He argued that the Capitol riot and Mr. Trump’s wider effort to overturn the election results demonstrated the resilience of America’s core institutions. “Nobody should look at these events and suggest that they undermine the strength of our example,” he said.

Mr. Malinowski and other proponents of the summit concede that it brings some practical complications, foremost among them who, exactly, would be invited to attend.

In his Foreign Affairs essay, Mr. Biden said his summit could be modeled on President Barack Obama’s four nuclear security summits, in which world leaders convened to share ideas and make specific pledges about reducing and securing nuclear weapons.

Mr. Biden added that his event would feature civil society organizations “that stand on the front lines in defense of democracy” and feature “a call to action” to technology and social media companies that become vessels for anti-democratic disinformation.

Yet countries such as Turkey, Poland and Hungary, all NATO allies, are ostensibly democracies but ones increasingly defined by authoritarian practices. Critics ask whether they should be invited and coaxed to adopt reforms, or excluded to deny them the status and stature of the democratic label.

One approach would be to create a D-10 group of democracies, a concept devised by the State Department during the George W. Bush administration, in which the United States would be joined by Australia, Britain, Canada, France, Germany, Italy, Japan, South Korea and the European Union.

Whatever form it takes, supporters of that idea say it would be a distant echo of Mr. Bush’s grand “freedom agenda,” his call to transform Middle Eastern autocracies into democracies that many now see as an example of United States hubris.

“This has to be done with complete humility and serious honesty about our shortcomings, and the fact that we are not exporting an American model,” said Thomas Carothers, a senior vice president at the Carnegie Endowment for International Peace.

Several supporters of the democracy summit agree that the political mayhem calls for a deeply humble approach.

“I don’t think what he’s talking about is lecturing the world on democracy,” said Gayle Smith, a former National Security Council senior director for development and democracy in the Obama administration.

“President Biden understands very well, and we have seen, obviously, that democracy isn’t something that you declare, ‘democracy,’ and we’re done,” added Ms. Smith, who is now the president and chief executive of the One Campaign, which advocates globally against poverty and disease. “It’s an ongoing process.”