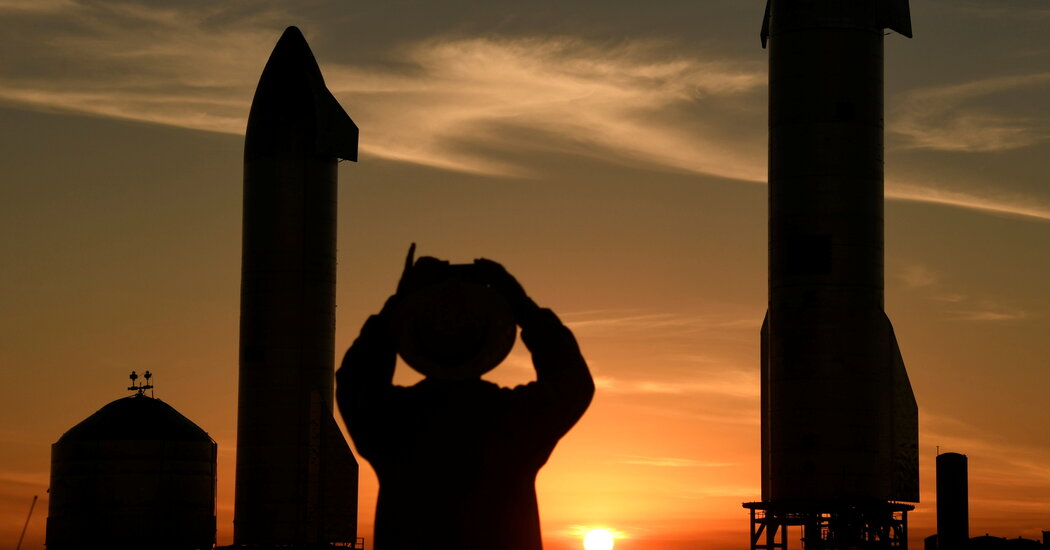 On Tuesday, a test flight of SpaceX’s Starship, a huge next-generation spacecraft that Elon Musk, the founder and chief executive of the private rocket company, dreams of one day sending to Mars, came to an explosive end.

That brief flight, to an altitude of about 6 miles and then back to a landing pad, appeared to again demonstrate how the mammoth rocket would tip over on its side as it descended in a controlled belly flop back toward a landing.

But when the prototype fired its engines to right itself back to a vertical orientation, it appeared that one engine did not properly ignite, and Starship hit the ground at an angle, disintegrating in a fireball, leaving a cloud of smoke rising over the test site, which is in Boca Chica, Tex., near Brownsville.

The end was similar to the last test flight in December which also ended in an explosion at landing, although the particular cause of the rocket failing to slow down enough may have been different.

This time, however, SpaceX at least had the permission of government regulators.

Last week, SpaceX and the Federal Aviation Administration, which regulates rocket launches, seemed to be in a strange regulatory standoff. SpaceX had filled the propellant tanks of this prototype of Starship — its ninth one — and looked ready to launch. But then the rocket stayed on the ground when no approval from the F.A.A. arrived.

Mr. Musk expressed frustration on Twitter, describing the part of the F.A.A. that oversees SpaceX as “fundamentally broken.”

Mr. Musk wrote, “Their rules are meant for a handful of expendable launches per year from a few government facilities. Under those rules, humanity will never get to Mars.”

Late on Monday, the F.A.A. gave permission for Tuesday’s launch, but then added that the December launch had occurred without the agency’s approval. SpaceX had requested a waiver to conduct that flight even though it posed a greater danger to the public than allowed by regulations. The F.A.A. denied the request. SpaceX defied the ruling and launched anyway.

The F.A.A. statement indicated that the agency was unhappy with the defiance of SpaceX. Even if Starship had landed perfectly, launching it without approval was a violation of the company’s license.

SpaceX was told to investigate and report on this series of events and to halt testing that could endanger the public until the company made changes that satisfied the agency.

In its statement, the F.A.A. said that SpaceX had complied with the safety regulations, giving a green light to this test flight.

Mr. Musk’s company has become successful in the launch business, and it is now one of the world’s most valuable privately held companies. Its Falcon 9 rockets have become a dominant workhorse for sending satellites to orbit. It routinely transports cargo to the International Space Station, and has lifted NASA astronauts there twice in 2020, with more trips planned this year.

However, many are skeptical about Mr. Musk’s assertion that the company is just a few years from sending a Starship to Mars, saying he has repeatedly set timelines for SpaceX that proved far too optimistic in how quickly they have come to pass.

In 2019, when he provided an update on the development of Starship, he said a high-altitude test would occur within months and that orbital flights could occur early in 2020.

Instead, several catastrophic failures happened because of faulty welding. When the propellant tanks stopped rupturing, one of the prototypes made a short successful flight in September. That earlier Starship model, which resembled a spray paint can with the label removed, lifted itself nearly 500 feet using a single rocket engine before setting down at the Texas test site.

Jared Zambrano-Stout, a former official at the F.A.A.’s office of commercial space transportation, said he was stunned when he saw the agency’s statement about SpaceX.

“SpaceX seems to have violated their launch license, and there does not seem to have been any repercussions,” he said.

Mr. Zambrano-Stout, who is now director of congressional and regulatory policy at Meeks, Butera and Israel, a Washington law firm, said he knew of no other instances where the F.A.A. had denied a launch license or where a company launched without approval from the F.A.A.

“It’s important for people to understand that the FAA’s job is not to stop launches from occurring,” he said. “They are in the business of licensing launches.”

The agency’s role is to ensure safety for what it calls the “uninvolved public” — people not involved with SpaceX or the launch so that someone just walking around or sitting at home is not injured or killed if something goes wrong.

“I think it would be really hard to find an example of where the F.A.A. has stopped SpaceX from doing what it wanted to do” before the December incident, Mr. Zambrano-Stout said.

As SpaceX continues its development of Starship, it has already launched three other rockets this year. One mission, Transporter-1, launched on Sunday and carried 133 commercial and government spacecraft (as well as 10 of SpaceX’s Starlink internet satellites). The launch represented SpaceX’s entry into the business known as rideshare, in which numerous customers pay for a fraction of the cost of a trip to orbit.