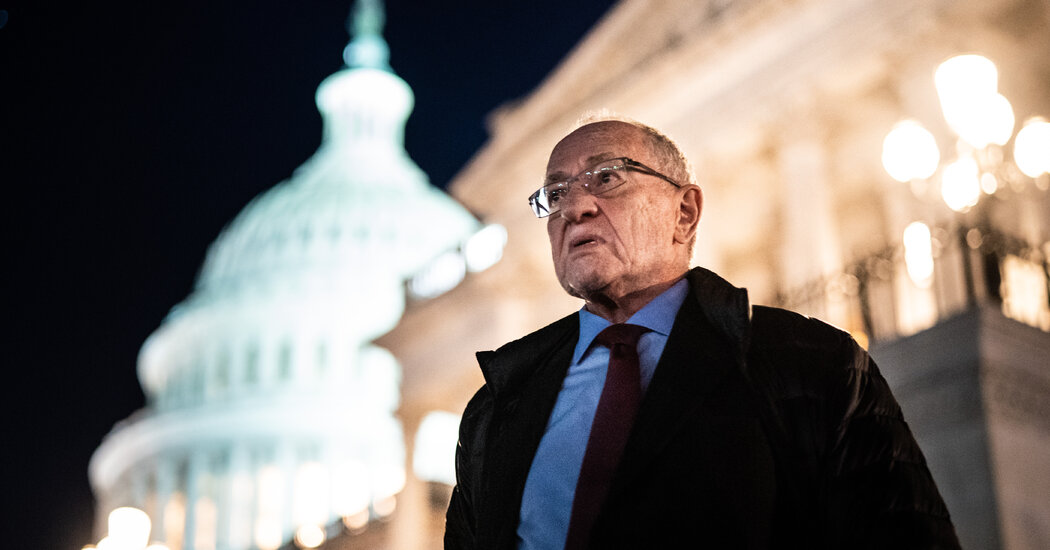 WASHINGTON — By the time George Nader pleaded guilty last year to possessing child pornography and sex trafficking a minor, his once strong alliances in President Donald J. Trump’s inner circle had been eroded by his cooperation with the special counsel’s investigation into Mr. Trump’s team and its connections to Russia.

So as Mr. Nader sought to fight the charges and reduce his potential prison time, he turned to a lawyer with a deep reservoir of good will with the president and a penchant for taking unpopular, headline-grabbing cases: Alan M. Dershowitz.

Mr. Dershowitz told Mr. Nader’s allies that he had reached out to an official in the Trump administration and one in the Israeli government to try to assess whether they would support a plan for Mr. Nader to be freed from United States custody in order to resume a behind-the-scenes role in Middle East peace talks, and whether Mr. Trump might consider commuting his 10-year sentence.

Mr. Dershowitz helped craft a proposal — which Mr. Nader’s allies believed he was floating at the White House in the final days of the Trump presidency — for Mr. Nader to immediately “self-deport” after his release from a Virginia jail. Under the plan, Mr. Nader would board a private plane provided by the United Arab Emirates to return to the Gulf state, where he holds citizenship and has served as a close adviser to the powerful crown prince.

Given the nature of Mr. Nader’s crimes and his cooperation with the Russia investigation, his bid for clemency was a long shot that did not work out. But Mr. Dershowitz’s willingness to pull a range of levers to try to free him shows why he emerged as a highly sought-after and often influential intermediary as Mr. Trump decided who would benefit from his pardon powers.

Many of Mr. Dershowitz’s clients got what they wanted before Mr. Trump left office, an examination by The New York Times found. The lawyer played a role in at least 12 clemency grants, including two pardons, which wipe out convictions, and 10 commutations, which reduce prison sentences, while also helping to win a temporary reprieve from sanctions for an Israeli mining billionaire.

His role highlighted how Mr. Trump’s transactional approach to governing created opportunities for allies like Mr. Dershowitz — an 82-year-old self-described “liberal Democrat” who defended the president on television and in his first impeachment trial — to use the perception that they were gatekeepers to cash in, raise their profiles, help their clients or pursue their own agendas.

Mr. Dershowitz received dozens of phone calls from people seeking to enlist him in clemency efforts.

The cases in which he did assist came through family members of convicts, defense lawyers enlisting him because they thought he could help their court cases as well as their clemency pushes and Orthodox Jewish prisoners’ groups with which he has long worked.

In a series of interviews, Mr. Dershowitz — who in a career spanning more than half a century has represented a roster of tabloid-magnet clients accused of heinous acts, including O.J. Simpson and Jeffrey Epstein — cast his defense of Mr. Trump and his clemency efforts as a natural extension of his work defending individual rights against a justice system that could be harsh and unfair.

“I’m just not a fixer or an influence peddler,” he said.

Mr. Dershowitz said his efforts on behalf of Mr. Nader reflected “a multifaceted approach to these problems. So I don’t separate out diplomacy, legality, courts, executive, Justice Department — they’re all part of what I do.”

He said that “the idea that I would ever, ever ingratiate myself to a president in order to be able to advertise myself as a person that could get commutations is just totally false and defamatory.”

He acknowledged, though, that his relationship with Mr. Trump increased interest in his services, and potentially his effectiveness.

He said he had agonized over cases in which he had failed to persuade Mr. Trump, including that of a federal death row inmate he had represented who was executed in December.

Still, Mr. Dershowitz had an outsize influence over how Mr. Trump deployed one of the most profound unilateral powers of the presidency, including:

It is difficult to determine how much money the work brought Mr. Dershowitz.

Mr. Dershowitz, who described himself as semiretired, said more than half of his clemency work was pro bono, and most of it was done on behalf of pre-existing clients. When he was paid, it was at an hourly rate in line with the fees charged by senior partners at law firms, Mr. Dershowitz said.

In one case, he was paid by the family of Jonathan Braun, whose 10-year sentence for drug smuggling was commuted by Mr. Trump in his final hours in office. But after The Times reported that Mr. Braun had a history of violence and threatening people, Mr. Dershowitz said he donated the fees to charity.

But Mr. Dershowitz — who volunteered examples of Mr. Trump seeking his advice while in the next breath protesting that he was “not a Trump supporter” and had no more influence with Mr. Trump than with past presidents — obtained something that his defenders and detractors alike described as especially important to him: renewed political relevance and an increased reputation as a power player, particularly in the Jewish community.

Mr. Dershowitz emerged as a favorite of Mr. Trump from his early days in office as a result of his criticism of the investigation being carried out by the special counsel, Robert S. Mueller III.

Mr. Dershowitz, an ardent supporter of Israel, was invited to the White House in 2017 for two days of private talks about a Middle East peace plan being assembled by Mr. Trump, his son-in-law Jared Kushner and other officials.

Mr. Dershowitz was invited back to the White House last year, when Mr. Trump unveiled the peace plan, and for a Hannukah party in 2019 where Mr. Trump signed an executive order Mr. Dershowitz had helped draft targeting anti-Semitism on college campuses.

The week after the Hannukah party in 2019, Mr. Dershowitz attended a Christmas Eve dinner at the president’s Mar-a-Lago resort, where he said Mr. Trump lobbied him to join his impeachment legal defense team. Mr. Dershowitz said he decided to join as a matter of principle and noted that he had also consulted with President Bill Clinton’s legal team during his impeachment.

Mr. Dershowitz acknowledged taking advantage of his access to push for clemency grants, starting with the invitation to the White House for talks about the Middle East peace plan. He used the opportunity to urge Mr. Trump to grant clemency to Sholom Rubashkin, the kosher meatpacking executive convicted in 2009.

Mr. Rubashkin’s case had become a cause in Orthodox Jewish circles, and Mr. Dershowitz had worked on it on a pro bono basis. A few months after Mr. Dershowitz made the case to Mr. Trump in the White House, Mr. Rubashkin was free.

That outcome emboldened a network of prisoners’ rights and clemency groups associated with the Chabad-Lubavitch movement of Hasidic Jews.

Mr. Dershowitz and one of the Jewish groups with which he has worked closely, the Aleph Institute, were central players in the network. As word spread of their successes, they were inundated with requests from Orthodox Jewish prisoners and their families.

Late last year, Mr. Trump called Mr. Dershowitz to ask about clemency grants he was advocating with the Aleph Institute for Mark A. Shapiro and Irving Stitsky, the New York real estate investors convicted in the $23 million fraud. Mr. Dershowitz cast the cases as emblematic of the trial penalty.

Mr. Dershowitz had written op-eds in Newsweek and The Wall Street Journal denouncing the trial penalty and citing unnamed cases. One matched the details of Mr. Shapiro and Mr. Stitsky, who were each sentenced to 85 years in prison after they turned down plea agreements of less than 10 years. Mr. Dershowitz said one or both of the articles had circulated in the White House, and Mr. Trump had asked him about the trial penalty.

“He was very interested” in the penalty, Mr. Dershowitz said, and also “the concept of the pardon power being more than just clemency, but being part of the system of checks and balances for excessive legislative or judicial actions.”

Mr. Stitsky had no prior relationship with Mr. Trump. But last year, friends of Mr. Stitsky helped retain a Long Island law and lobbying firm, Gerstman Schwartz, that did. One of the firm’s partners had parlayed previous New York public relations work for Mr. Trump into a new Washington lobbying business after he became president.

And Mr. Stitsky’s new lawyers also tapped into the pardon-seeking network by working with both Mr. Dershowitz and the Aleph Institute.

In another case championed by Mr. Dershowitz and the Aleph Institute, Mr. Trump commuted the 20-year sentence of Ronen Nahmani, an Israeli-born Florida man convicted in 2015 of selling synthetic marijuana. The appeal to the White House, which Mr. Dershowitz helped devise, included an assurance that Mr. Nahmani would leave the country and never return — a framework that Mr. Dershowitz said served as a model for Mr. Nader’s case.

Mr. Dershowitz was enlisted to help Mr. Nader by Joey Allaham, a Syrian-born New York restaurateur and businessman, who paid Mr. Dershowitz to consult on Middle East issues, including working with Mr. Nader.

Mr. Nader’s team grew to include the lobbyist Robert Stryk, who filed a disclosure statement saying he was working to win a presidential commutation, and the lawyer Robin Rathmell, who filed a clemency petition at the Justice Department citing Mr. Nader’s help to the United States in Middle East relations. Mr. Nader’s allies had also used that argument in the early 1990s in an effort to win a reduced sentence when he pleaded guilty to a different child pornography charge.

Mr. Dershowitz said he thought it would help Mr. Nader’s current case if the American, Israeli and Emirati governments would vouch for his assistance to the United States in the region, and if Mr. Nader would pledge to leave the country upon his release.

Mr. Dershowitz told Mr. Nader’s allies that he made one call last year to a Trump administration official who handled Middle East policy and who was discouraging about the idea. He also called Ron Dermer, the Israeli ambassador to the United States, who was noncommittal. After that, Mr. Dershowitz said, he shifted his efforts on behalf of Mr. Nader to focus almost exclusively on his fight to reduce his sentence in the courts.

“That was 99 percent of the effort,” Mr. Dershowitz said, “because the clemency effort directed at commutation was always so uphill considering the nature of the crime that it was never realistic.”

“We understood that Mr. Dershowitz was seeking clemency on behalf of Mr. Nader,” Mr. Jeffress said, “and that he was rejected for the sole reason that Mr. Nader had cooperated in the Mueller investigation.”