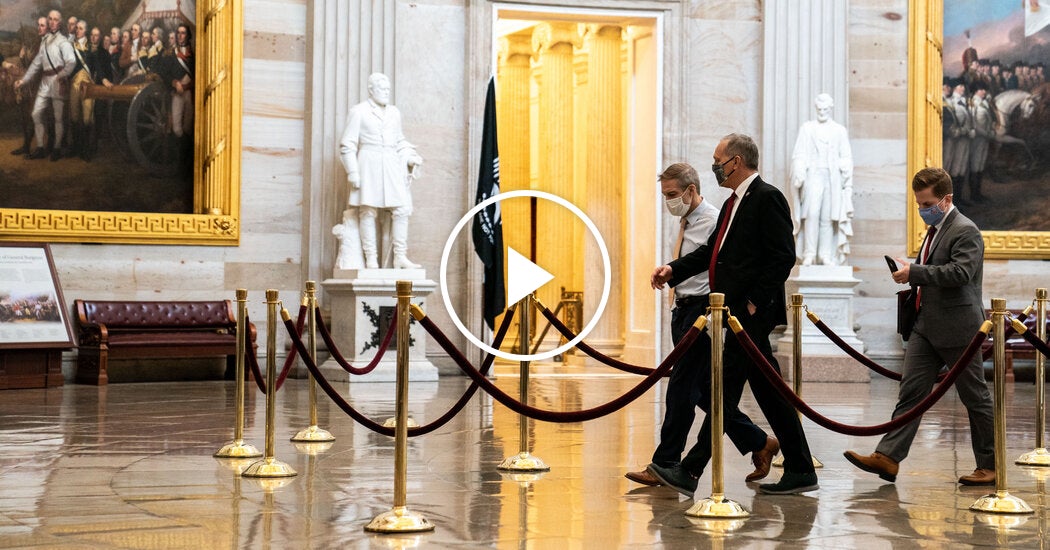 “I want to step back from the horrors of the attack itself, and look at Jan. 6 from a totally different perspective, the perspective of the insurrectionists themselves — their own statements before, during and after the attack make clear the attack was done for Donald Trump at his instructions, and to fulfill his wishes. During the rally, President Trump led the crowd in a ‘Stop the steal’ chant. Here’s what that chant sounded like from the crowd’s perspective.” Trump: “We will stop the steal.” Crowd: “Stop the steal. Stop the steal. Stop the steal!” “The president basked as the crowd chanted, ‘Fight for Trump,’ and when he incited the crowd to show strength, people responded, ‘Storm the Capitol,’ ‘Invade the Capitol.’ As the crowd chanted at the rally, the crowd at the Capitol made clear who they were doing this for.” “Fight for Trump! Fight for Trump! Fight for Trump!” “All of these people who have been arrested and charged, they’re being accountable, held accountable for their actions. Their leader, the man who incited them, must be held accountable as well.” “Jan. 6 was a culmination of the president’s actions, not an aberration from them. The insurrection was the most violent and dangerous episode, so far, in Donald Trump’s continuing pattern and practice of inciting violence.” “So if you see somebody getting ready to throw a tomato, knock the crap out of him, would you seriously — OK, just knock the hell — I promise you, I will pay for the legal fees. I promise.” The president praised a Republican candidate who assaulted a journalist, as ‘my kind of guy.’ He said there were, quote, ‘very fine people on both sides’ when the neo-Nazis, the Klansmen and Proud Boys invaded the city, the great city of Charlottesville, and killed Heather Heyer. And he said that an attack on a Black protester at one of his rallies was ‘very, very appropriate.’ Does that sound familiar? Listen to how President Trump responded when asked about his own conduct on January the 6th.” “So if you read my speech, and many people have done it, it’s been analyzed, and people thought that what I said was totally appropriate.” “My dear colleagues, is there any political leader in this room who believes that if he is ever allowed by the Senate to get back into the Oval Office, Donald Trump would stop inciting violence to get his way? Would you bet the lives of more police officers on that? Would you bet the safety of your family on that? Would you bet the future of your democracy on that?” “President Trump’s lack of remorse and refusal to take accountability after the attack poses its own unique and continuing danger. It sends the message that it is acceptable to incite a violent insurrection, to overthrow the will of the people, and that a president of the United States can do that. And get away with it. His impeachment, conviction and disqualification is not just about the past. It’s about the future. It’s making sure that no future official, no future president does the same exact thing President Trump does.” “If you don’t find this a high crime and misdemeanor today, you have set a new terrible standard for presidential misconduct in the United States of America. The only real question here is the factual one. Did we prove that Donald Trump, while president of the United States, incited a violent insurrection against the government? We believe that we have shown you overwhelming evidence in this case, that would convince anyone using their common sense that this was indeed incitement.” “We humbly, humbly ask you to convict President Trump for the crime for which he is overwhelmingly guilty of. Because if you don’t, if we pretend this didn’t happen, or worse. if we let it go unanswered, who’s to say it won’t happen again?”