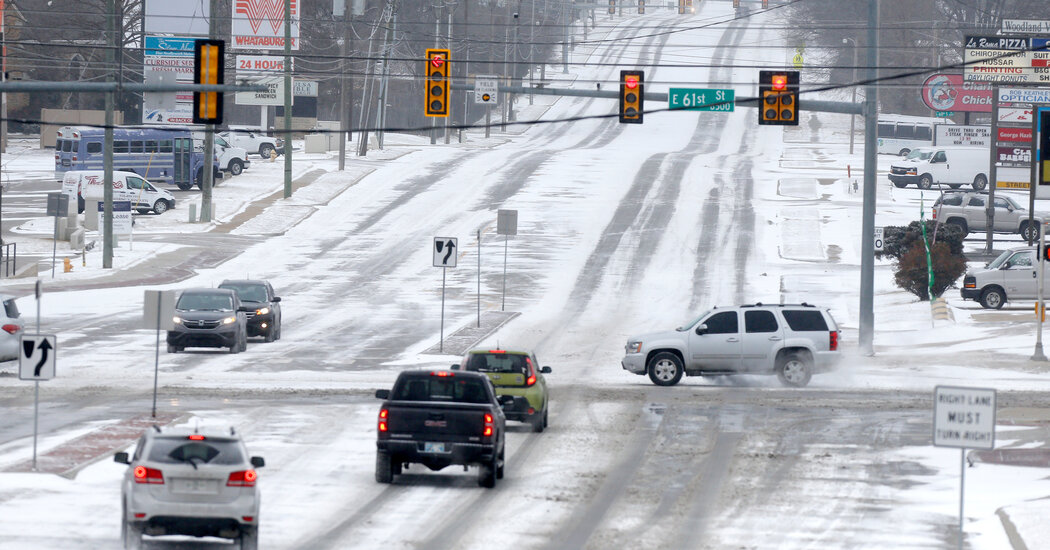 Ms. Waldron’s boyfriend, Patrick Attwater, 34, drove to the couple’s house in Austin on Saturday to heat it to 65 degrees and to let the faucets drip, insurance against burst pipes as temperatures were forecast to dip as low as single digits on Sunday night, forecasters said. “I’m from Kansas,” he said. “When we look at our family up there, it’s minus 20, so we feel luckier here.”

Parts of the Gulf Coast in Texas, Louisiana and Mississippi are quite familiar with brutal weather: hurricanes, floods, thick summer heat. But single-digit temperatures and ice-slicked roads were something different entirely.

In Mississippi, officials told residents they would probably need to stay off the roads until at least Tuesday. They cautioned that the local authorities there were not as equipped as those in Northern states that regularly encounter such wintry conditions.

“We have some plows on our trucks, but it’s not the kind like you have up North that is really designed to put weight on that plow and dig down and get it off of the roadway,” said Melinda McGrath, the executive director of the Mississippi Department of Transportation. “We do not invest in those because this only occurs like once every five years or so.”

Business owners were looking at forecasts and deciding whether to close. Jeff Good, who owns three restaurants in and around Jackson, Miss., said two of his restaurants remained open Sunday night, but the third, a bakery that opens early, would certainly be closed on Monday. “With the weather tonight at midnight, we just can’t see how we can do a 6 o’clock in the morning opening,” Mr. Good said.

Valentine’s Day celebrations had already been curtailed because of the coronavirus pandemic. Now, plans had to be dialed back even more.

Deidre Head, 50, of Jackson said she and her husband had made “tentative plans” for a picnic brunch, but their favorite restaurants were closing early or not offering curbside pickup. Instead, Ms. Head said the couple “settled for a lovely Valentine’s Day brunch in the parking lot of McDonald’s.”