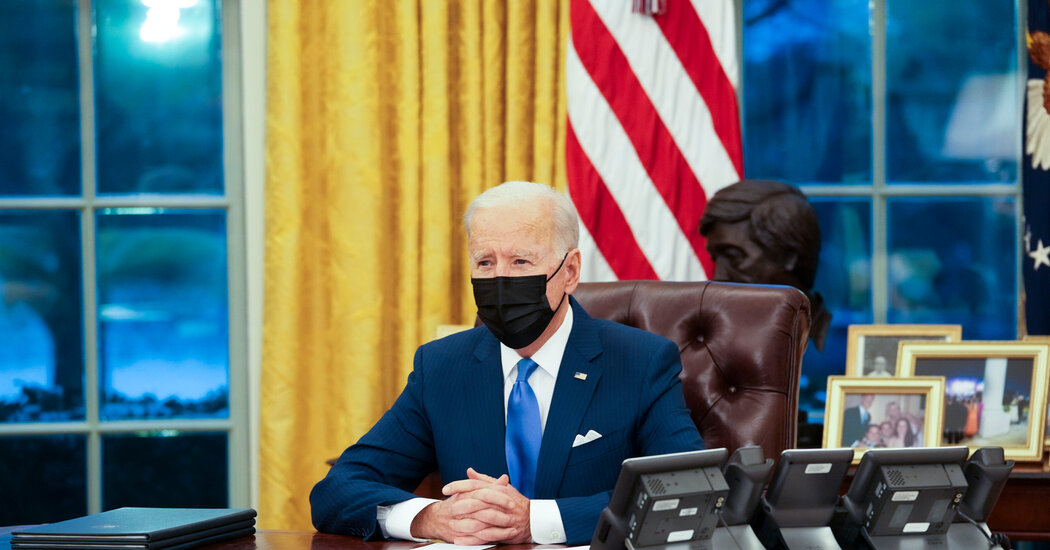 WASHINGTON — President Biden’s allies say that with the distraction of the impeachment trial of his predecessor now over, he will quickly press for passage of his $1.9 trillion coronavirus relief plan before moving on to an even bigger agenda in Congress that includes infrastructure, immigration, criminal justice reform, climate change and health care.

Mr. Biden has so far succeeded in pushing his agenda forward even amid the swirl of the impeachment, trial and acquittal of former President Donald J. Trump. House committees are already debating parts of the coronavirus relief legislation he calls the American Rescue Plan. Several of the president’s cabinet members have been confirmed despite the Trump drama. And Mr. Biden’s team is pressing lawmakers for quick action when senators return from a weeklong recess.

Without the spectacle of a constitutional clash, the new president “takes center stage now in a way that the first few weeks didn’t allow,” said Jennifer Palmieri, who served as communications director for President Barack Obama. She said the end of the trial means that “2021 can finally start.”

In a statement after the trial, Mr. Biden restated his hopes for bipartisan support, vowing to work across party lines to “heal the very soul of the nation.” But Mr. Biden’s prospects are complicated by the fact that much of his agenda is aimed at dismantling Mr. Trump’s policies or addressing what Democrats have cast as his failures, most significantly the fumbled response to the pandemic.

And the 43 “not guilty” votes from Senate Republicans on Saturday cast in sharp relief both the political opportunities and challenges ahead for Mr. Biden: a small minority of Republican senators willing to brave the wrath of Mr. Trump’s powerful political movement by voting to convict him, while Mr. Trump continues to hold sway over most of his party.

The reality is that Mr. Trump’s influence with Republicans will be an obstacle for Mr. Biden’s priorities even with the former president’s departure from Washington. Even with control of both houses of Congress, Democrats will still need some Republican support on many of Mr. Biden’s agenda items to overcome a filibuster in the Senate.

“Trump certainly will continue to be a force in the Republican Party. They have to decide whether they are captive to that or not,” said Winnie Stachelberg, an executive vice president at the Center for American Progress, a liberal think tank. “President Biden has the well-being of the American people squarely in focus. He is not going to be derailed and distracted from that primary mission, whatever former President Trump is doing as a sideshow.”

In recent days, senior members of Mr. Biden’s team have begun internal meetings at the White House to discuss what the next phase of his agenda will look like and how it will be rolled out, according to two top White House advisers. Some of that could be revealed publicly in March, when Mr. Biden is expected to deliver a joint address to Congress, as is traditional in a president’s first year in office.

Administration officials acknowledge that there will now be more public attention on Mr. Biden, a reality they plan to capitalize on early this week with the president’s first substantive trip outside Washington. Mr. Biden will participate in a CNN town-hall-style event on Tuesday in Milwaukee and will travel to another part of the country on Thursday, officials said.

“There will be more of a spotlight on it than there was last week for understandable reasons,” said Jen Psaki, the White House press secretary. “Now it can return to a focus on the president’s agenda of getting relief into the hands of the American people.”

Public polls show the president’s agenda to be broadly popular, even among some Republicans. That has contributed to pressure from Democratic progressives to forgo any compromises with Republicans that could water down Mr. Biden’s policy proposals. And Republicans — who are still adjusting to their loss of the Senate and the White House — have not yet coalesced around a consistent substantive attack on the president’s agenda.

“He may be able to rally more of the country to his side when it comes to support for the agenda because of the lack of a cohesive Republican argument,” Ms. Palmieri said of Mr. Biden.

But with razor-thin margins in Congress, the president’s hopes for swift enactment of an ambitious agenda are more likely if he can count on at least some Republican support. And Mr. Trump’s hold on the party looms over the prospect of bipartisan cooperation.

For the first 24 days of Mr. Biden’s presidency, Mr. Trump was a constant presence — not on the Twitter account he is banned from using but as the target of impeachment for inciting an insurrection to prevent his own ouster. Reporters camped out in Palm Beach, Fla., as cable networks broadcast wall-to-wall coverage of the Senate trial that would decide his fate.

Mr. Biden tried hard to distance himself from the debate over whether to hold Mr. Trump accountable for the Capitol riot on Jan. 6, fearing he would lose momentum on his agenda.

Even with the trial over, Mr. Trump does not appear to want to lose his grip on the nation’s psyche. Aides to the former president say Mr. Trump plans to hold a news conference from Mar-a-Lago, his Florida home, in the coming days. In a statement immediately after the trial ended, Mr. Trump, who has expressed interest in running for president again in 2024, hinted that he has no plans to disappear from television screens or the political lives of Republicans in Congress.

“Our historic, patriotic and beautiful movement to Make America Great Again has only just begun,” the former president wrote. “In the months ahead I have much to share with you, and I look forward to continuing our incredible journey together to achieve American greatness for all of our people. There has never been anything like it!”

Ms. Psaki said the president — who steadfastly refused to comment on the impeachment trial while it was underway — is not focused on Mr. Trump. She said mentions of his comments or activities came up very rarely in private conversations among the president and his aides.

“The political campaign is over,” she said. “He beat Donald Trump. He, and we, are not looking to re-engage in that battle.”

Presidents often continue to refer to their predecessors long after they have given up the world’s biggest bully pulpit.

When Mr. Obama took office in 2009, he vowed to end the “cowboy diplomacy” of his predecessor, George W. Bush, and blamed him for the country’s economic woes. In 2017, Mr. Trump repeatedly disparaged Mr. Obama’s achievements as a way of promoting the change he said was necessary.

But perhaps more than any previous president, Mr. Biden has used Mr. Trump as an effective political foil, constructing his agenda almost completely as a repudiation of Mr. Trump’s policies and personal behavior during his four tumultuous years in office.

Mr. Biden’s first actions on Day 1 were a blitz of executive orders intended to undo many of Mr. Trump’s policies in a single day. And he often casts his broader agenda as the necessary response to actions taken — or not taken — by his predecessor. Late last week, he said again that Mr. Trump’s administration had left the government with too few tools to fight the coronavirus pandemic.

“What we thought was available, in terms of everything from vaccine to vaccinators, was not the case,” Mr. Biden told a bipartisan group of mayors and governors.

Joe Lockhart, who served as press secretary for President Bill Clinton, said that the most important thing Mr. Biden can do to advance his broad agenda is to be successful in the fight against the pandemic and the efforts to repair the battered economy.

“Where he will gain political capital is the comparison of his handling of the pandemic to the disastrous effort by the Trump administration,” Mr. Lockhart said. The end of the impeachment trial, he said, “clears the way for people to focus on that.”

The question for Mr. Biden is whether he can take advantage of the political breathing room to build support for his proposals. And if he can, will the public pressure be enough to persuade Republicans in Congress to buck Mr. Trump’s influence?

Senator Chris Coons, Democrat of Delaware and a close ally of the president’s, said Mr. Biden would continue pressing for bipartisan cooperation on the coronavirus relief bill and other priorities. But he said that he was confident the president would not let opposition from Republicans deter him.

“He is moving forward on relief that has the support of three-quarters of the American people,” Mr. Coons said on ABC’s “This Week” on Sunday. “And from the way he spoke at his inauguration to the actions he’s taken in his first couple of weeks, he is showing us what real presidential leadership looks like, in sharp contrast to his predecessor.”